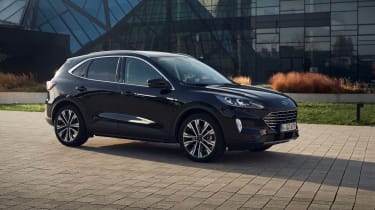 A new hybrid Ford Kuga has been launched, giving buyers another low-emission electrified powertrain option. It sits beneath the plug-in hybrid (PHEV) in the range, allowing you to drive short distances on electric power alone. You can order the Ford Kuga Hybrid now, with prices starting at £33,600.

Unlike the PHEV model, you don’t have to plug this hybrid Kuga in to recharge the battery, as that’s taken care of by the petrol engine and the regenerative braking feature. The trade-off is that you’ll only be able to drive a couple of miles on electric power at a time, rather than the 35 miles possible in the Ford Kuga Plug-in Hybrid.

The electric motor and battery essentially improve the efficiency of the petrol engine, so you can expect decent economy figures from this new Kuga. Officially, it’ll manage 48.7mpg, which is noticeably better than the petrol Kugas and the hybrid Honda CR-V. Based on that figure, the Kuga Hybrid can travel further between fuel stops than the Kuga Plug-in Hybrid, with over 600 miles possible from a single tank of petrol. 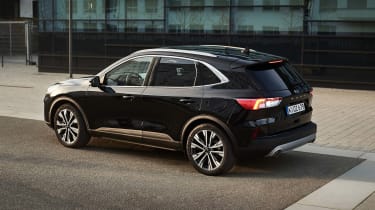 Both the PHEV and the Hybrid (Ford refers to it as the ‘FHEV’) use the same 2.5-litre petrol engine and a CVT automatic gearbox, albeit with a stepped effect in Normal and Sport modes to make it feel like a conventional auto gearbox. Zero-to-62mph is nippy at 9.1 seconds, and the Ford Kuga FHEV offers a 1,600kg towing capacity.

You can specify this new hybrid powertrain in ST-Line Edition, ST-Line X Edition and top-spec Vignale trim levels, with all three getting wireless phone charging, Ford’s SYNC 3 infotainment system and the FordPass Connect modem. This brings live traffic updates and a host of features accessed through the FordPass app, including the ability to remotely lock or unlock the vehicle.

Ford’s latest electrified Kuga could be the pick of the range - at least for the time being. The Plug-in Hybrid has been recalled and will return to the line-up next year, while the mild-hybrid is best thought of as a normal diesel engine with a few tweaks to make it slightly more efficient. This Kuga Hybrid looks to be a great choice if you’re not too keen on buying a diesel.

Check out our guides to the best hybrids and best hybrid SUVs to buy now. 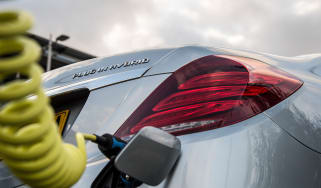