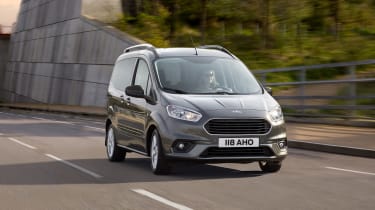 MPVs, or people carriers, have become less popular in recent years as customers have flocked to SUVs, but no-one seems to have told Ford. It offers no fewer than five MPVs and three of them are based on the company’s Transit van. The Ford Tourneo Courier is the smallest of these and shares its underpinnings with the Ford Fiesta.

That’s a good start, as the Fiesta is our favourite supermini to drive, but such a tall vehicle is never going to handle like a sports car; the Tourneo Courier is a way of transporting people and cargo from A to B, and it’s good at it. There’s a vast amount of headroom for both front- and rear-seat occupants, and a huge 708-litre boot with all five seats in place. Sliding doors make rear access easy, even in tight car parks.

The engine choice is even simpler, as all models now come with a 99bhp 1.5-litre diesel - although an EcoBoost petrol engine was briefly available. The diesel gets a six-speed gearbox and is quite economical at 52.3mpg. It’ll lug a fully loaded Courier with ease but it won’t do it quickly; overtakes will require plenty of space and forward planning.

The Tourneo Courier is very good value, especially if you need lots of room, but you don’t have to look far to see where Ford has cut the costs of making it. The interior looks dated and the huge areas of scratchy plastics remind you that this was predominantly designed as a van. Much of the switchgear is taken from the previous-generation Fiesta - which made its debut in 2008 - and Zetec cars make do with an LCD radio display, a vast bank of buttons and a smartphone holder.

The Ford Tourneo Courier’s one diesel engine is quite economical

There’s now just the one diesel engine available for the Tourneo Courier, now that the 1.0-litre EcoBoost petrol has been discontinued. The 1.5-litre diesel manages 52.3mpg, although you’ll see fuel economy drop when the engine has to be worked hard. Company-car drivers will be faced with a high Benefit-in-Kind rate, due to the engine’s 141g/km CO2 emissions. 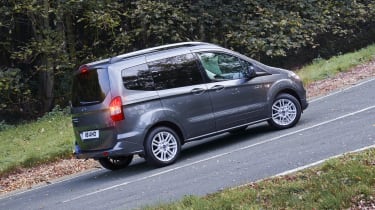 After the first year’s VED - usually included in the car’s price - the Tourneo Courier costs £150 a year in tax. Ford has the largest dealer network in the UK, so you shouldn’t have to travel very far at all for servicing and maintenance, while servicing plans are available to take the guesswork out of the first couple of services. A three-year warranty is included alongside a year’s roadside assistance.

The 99bhp diesel engine provides enough power to haul the Tourneo Courier when full of people and stuff, but acceleration from 0-62mph takes a leisurely 13.4 seconds. That’s a second slower than a diesel Fiesta but at least the 109mph top speed and six-speed gearbox means the Courier can take motorway driving in its stride. 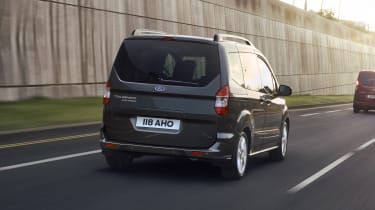 It’s also better to drive than you might expect, as it’s based on the same underpinnings as the agile Fiesta. The steering is pleasingly accurate, if a touch heavy, while body roll isn’t too bad given the tall body. We found the engine to be a little loud but it settles down at a cruise.

Ford is giving most of its cars a free-standing eight-inch touchscreen, but it hasn’t treated the Tourneo Courier to this yet. Titanium models are equipped with a six-inch version of the SYNC 3 system but it’s surrounded by a bulbous shroud, while Zetec cars get a huge number of buttons on the centre console by the latest standards. Both specifications miss out on some of the chrome trim and soft-touch materials you’ll find in the Fiesta, which isn’t surprising given that the interior needs to be hard-wearing as it’s shared with the Transit Courier van. 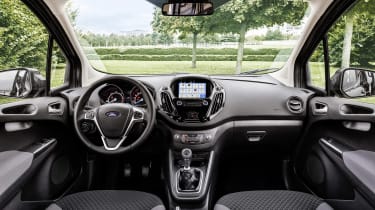 The entry-level Zetec comes with electric front windows, fog lights, air conditioning, cruise control and a heated windscreen. Not only does Titanium add the touchscreen with sat nav, but you also get alloy wheels, privacy glass, roof rails, auto lights and wipers and ‘one-touch’ control for both front windows. We’d recommend private buyers opting for this spec if you can afford it.

A few desirable features have been relegated to the options list. Parking sensors are £180 (but an entertainment pack must be specified too), while you might also fancy the front heated seats (£120), rear-view camera (£240 - both Titanium only) or the spare wheel (£126). An alarm is optional, too, and speccing this could reduce your insurance premium.

The Ford Tourneo Courier is incredibly practical for its size 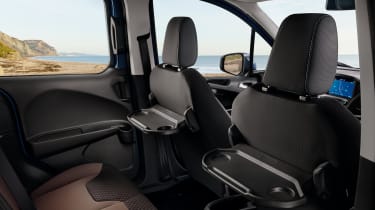 It may not take up much space on the road but because it’s a van, the Tourneo Courier is one of the most practical small cars on sale. There’s a lot of headroom in both seat rows, and the twin sliding rear doors make it easy to get in and out, or put children in car seats. Storage space is impressive too; you’ll find an overhead shelf in the front, a stowage drawer under the passenger seat and a centre console that’s big enough for a laptop.

Even with all seats in place, the boot offers 708 litres of space. It’s more than double the amount of space in a Fiesta’s boot, and moving the seats out of the way frees up 1,656 litres of luggage capacity. The seats fold down and also can be flipped forward. Ford has also included a clever touch in the variable-height parcel shelf, which can cover the boot or can separate two layers of luggage. Practical accessories like roof boxes, bike carriers and a tow bar can be ordered from the options list - although the Tourneo Courier has a very small towing limit. It can manage a small trailer weighing no more than 600kg.

The Tourneo Courier has a four-star safety score 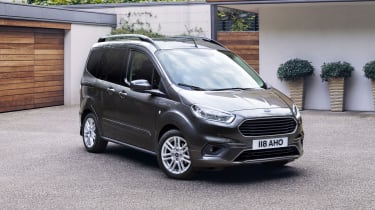 The Ford Tourneo Courier was tested by Euro NCAP in 2014 and received a four-star rating, with an 84% score for adult and child protection. It’s worth noting that the test gets tougher every year, so it’s hard to compare it with a car rated more recently. Auto emergency braking is standard, alongside hill-start assist.

Ford is one of the biggest-selling brands in the UK, but not all owners are content. The brand finished 24th out of 30 in our 2020 Driver Power survey. Exterior quality and acceleration were criticised, but the SYNC 3 infotainment system and handling were praised.