"The BMW 4 Series is the best car to drive in its class, regardless of the rather contentious nose" 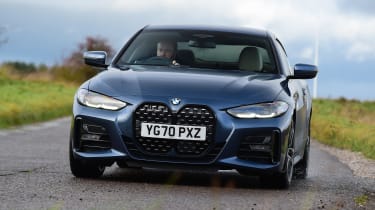 It had already achieved some notoriety thanks to its rather divisive grilles, but now that the BMW 4 Series coupe has actually launched, it needs to prove itself as the best executive coupe to drive. It's pitted against the Audi A5 and Mercedes C-Class Coupe and features a rear- or four-wheel drive chassis based on that of the talented BMW 3 Series.

It’s a great starting point, and the lower, wider 4 Series is even more impressive along a challenging stretch of road. BMW models in M Sport trim could often be uncomfortably firm but that’s certainly not the case here; the 4 Series' breathes with the road, soaking up most bumps for a luxurious feel. That doesn’t come at the cost of a slack feel in corners, as the car feels just as entertaining as you'd hope. Even with four-wheel drive, power is only sent to the front wheels when necessary, so it still feels like a balanced sports coupe from behind the wheel.

All six engines in the range are good performers. The entry-level 181bhp 2.0-litre four-cylinder 420i is involving and fun to drive, with a secure feel on the road and agile handling. It’s also refined, thanks to an excellent adaptive suspension setup, and won’t cost a fortune to run either, with a slick eight-speed automatic gearbox helping it achieve over 40mpg.

The remainder of the petrol range consists of the 430i and the high-performance M440i xDrive, which is the fastest version until the next M4 arrives. Offering 255bhp, the 430i comes with an eight-speed automatic as standard and can manage 40mpg.

Treading a similar path, diesels include the 420d, 430d and M440d xDrive but, somewhat oddly, the first two are faster than the equivalent petrol engines thanks to an abundance of pulling power. They can also top 60mpg, so high-mileage motorway drivers are likely to seek them out. 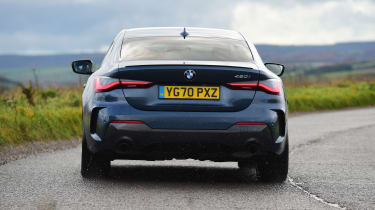 A plug-in hybrid 4 Series hasn't been confirmed as yet but a new all-electric model called the BMW i4 is planned. This is based on the same underpinnings as the 4 Series but with a unique design, and it's set to rival the Tesla Model 3 and Polestar 2.

Inside, the dashboard and features almost entirely mimic the 3 Series, but the coupe is only offered in M Sport trim. It's still possible to upgrade though, with packs to give it bigger wheels, improved infotainment and semi-autonomous driver aids.