The latest GLE is a step forwards in economy over its predecessor, but will still be costly to run

Charged with representing Mercedes in the large SUV sector until well into this decade, the GLE has to represent a considerable step forward from its predecessor when it comes to economy and emissions. However, while incremental fuel economy improvements have been made, no Mercedes GLE stands out as being particularly inexpensive to run or maintain. The GLE 350 de plug-in hybrid is the exception, with an official figure of 403.6mpg, but this figure is largely academic unless you regularly keep the battery topped up and only drive short distances. Once the battery is depleted, the fuel consumption figure tumbles.

Besides the PHEV, the most economical model in the range is the 2.0-litre, four-cylinder diesel GLE 300 d. Mercedes claims it'll return up to 37.2mpg but also emits more than 200g/km of CO2 when 20-inch alloy wheels are fitted, putting it in the highest BiK band. The GLE 350 d and GLE 400 d use a 3.0-litre, six-cylinder in two different states of tune, which are good for up to 37mpg and 34mpg respectively. 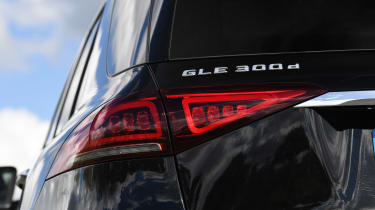 The powerful GLE 450 petrol may have mild-hybrid assistance, but shouldn't be mistaken for any environmental champion. It manages up to 28mpg and emits 229g/km of CO2, while the high-powered AMG 53 is even more thirsty at 26mpg - although this is competitive with performance SUV rivals. Those who can claim a Mercedes GLE as a company car will face a Benefit-in-Kind (BiK) rated in the highest 37% band.

With prices that start considerably in excess of £40,000, every GLE will cost £475 per year in road tax until the sixth occasion that your annual road fund license needs renewal, whereupon it will drop to £150 per year.

As a big, expensive and relatively powerful SUV, no GLE is likely to have you celebrating cheap insurance quotes. Even the entry-level GLE 300 d diesel has been rated group 44 for insurance by the Association of British Insurers (ABI). The petrol-fuelled GLE 450, meanwhile, is rated in group 47. The six-cylinder diesels occupy groups 47 and 48, but we always recommend you seek a quote before buying a new car.

Mercedes maintenance doesn't come cheap, but at least the company's fixed-price system makes it easy to know just how big your next service will set you back. Service contracts are available, which will cover you for two, three or four services; intervals are yearly or at every 15,500 miles, whichever occurs first. It's worth noting that Mercedes' ‘Emergency Service’ recovery is provided for as long as your car is maintained by the Mercedes dealer network.

While a 'minor' oil change service isn't hugely expensive, beware that wear-and-tear items such as tyres and brakes will be very costly on a large SUV like the Mercedes GLE.

Every Mercedes sold in the UK comes with a three-year/unlimited mileage warranty. When it expires, you can pay for an extended warranty, but beware that it carries certain exclusions, such as failure of seals or electrical wiring.