The Mercedes GLE has no shortage of power, but fails to overcome its bulk

The Mercedes GLE is fractionally taller and around 50mm longer than its predecessor, and both are closely matched on weight. Like the previous model, and despite clever technology that aims to create a more precise driving experience, the GLE is far more adept at effortless high-speed cruising than determined back-road sprints.

The 2.0-litre GLE 300 d comes as standard with conventional steel spring suspension, but all six-cylinder models are equipped with the brand's Airmatic air suspension system. This provides a consistently smooth ride when the standard 20-inch alloy wheels are fitted, but we have yet to test it on the larger 22-inch wheels you can choose as an option.

Enthusiastic drivers may be given hope by the optional 'Curve' setting that joins the GLE's list of Dynamic Select driving modes. It aims to improve cornering agility and passenger comfort by leaning the car into bends, cancelling out the natural body lean that such a big, heavy SUV might ordinarily be affected by. You can choose from three levels of effectiveness, and it certainly makes a difference – the GLE stays impressively level through fast motorway curves – but it does little to increase your confidence on a twisty road. 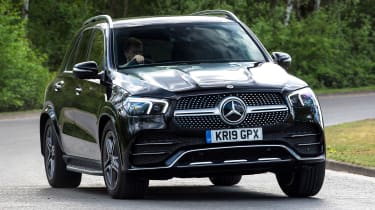 The GLE always feels the big, heavy car it is, and though the system effectively disguises the SUV's bulk, it can't do anything to increase the amount of grip on offer. In fact, by concealing the roll that would naturally dissuade you from pushing too hard in a corner, the 'Curve' setting leaves you wondering how much longer your tyres can retain their grip on the road – there's precious little sensation through the steering wheel, after all. The system is likely to be optional on UK cars, and it's a box we'd leave unticked on the price list.

E-Active Body Control has more tangible benefit, particularly if you often find yourself on tricky terrain or facing snowy conditions. Here, the system can perform its party trick of bouncing the car repeatedly on its suspension in an effort to regain traction. It's a clever idea, but one we have yet to put to the test. Mercedes' 4MATIC permanent four-wheel drive system is standard across the range.

While steering feel isn't exactly transformed, the GLE 53 does acquit itself better on a country lane than the regular model. Grip is impressive, which is hardly surprising considering its rear tyres are the same width as those fitted to the fastest Porsche 911, and the air suspension helps keep the 53's weight in check in its sportier driving modes.

The entry-level 300 d is likely to win the lion's share of GLE sales in the UK; its 2.0-litre, 242bhp diesel engine will prove more than sufficient for most. Mercedes says it can manage 0-62mph in just 7.2 seconds, and while it proves a little noisy when pulling away, it settles to a background hum once cruising speed is reached. Smoothness is helped by the standard nine-speed automatic gearbox, which responds quickly and renders gearchanges imperceptible.

The ‘450’ petrol engine offered in the latest GLE is a 3.0-litre, six-cylinder mild-hybrid that produces 362bhp. Acceleration from 0-62mph takes just 5.7 seconds, matching the 400d, but the petrol’s top speed is slightly higher at 155mph. Above that is the Mercedes-AMG GLE 53, which also comes with electrical assistance, and this range-topper produces 429bhp. The 0-62mph time is reduced to 5.3 seconds, which is quick enough to embarrass hot hatches off the line. The GLE's weight can still be felt, though, and you'll need to work the engine to make the most of its performance. Happily, the six-cylinder engine sounds surprisingly tuneful when you do, adding to the experience.

In 2020, Mercedes introduced the GLE 350 de plug-in hybrid. Most hybrids use a petrol engine and an electric motor to give diesel-like fuel efficiency, but Mercedes has combined a diesel engine with the electric motor. Together the system produces 316bhp, which is enough for a 0-62mph time of 6.8 seconds. The 23.4kWh battery allows an impressive electric range of 66 miles, and recharging takes three-and-a-quarter hours from a 7.2kW wallbox.