GLE offers seven-seat versatility in most models, but third row is really for occasional use

The outgoing Mercedes GLE was the first to bring a seven-seat option, and the latest has a choice of five or seven seats on most versions. It makes the Mercedes SUV an honest rival to the Land Rover Discovery and Volvo XC90, while matching the flexibility of cheaper alternatives such as the Kia Sorento and Skoda Kodiaq.

However, the sixth and seventh seats should be regarded as a bonus, rather than being core to the car's overall appeal. This is still a car best suited to four or five adults travelling in comfort, with overflow seating when it's required. If you’re going to be making regular use of the rearmost seats, the bigger Mercedes GLS will be more suitable. 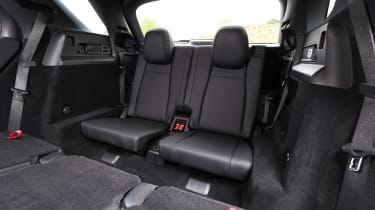 Those sitting in the front of the GLE can stretch out in comfort. There's ample adjustment to allow the driver to find an ideal position behind the wheel, plus a good view out thanks to the large expanse of glass and tall ride height.

Growing 50mm longer than its predecessor, the latest GLE offers greater legroom for those in the second seating row. Here, legroom is as generous as headroom, and there's enough interior width to allow three adults to travel without clashing shoulders.

The third row of seats is far less accommodating. It provides space for two passengers, but they'll need to be short in stature to feel really comfortable. The sixth and seventh seats are really best suited to children. It's unfair to single the GLE out for criticism in this regard, though – the Volvo XC90 and Land Rover Discovery only have a small advantage where it comes to third row space. It's also worth noting the GLE 53 is one of the only high-performance SUVs with seven seats on offer. 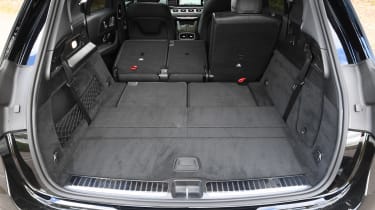 One area the latest GLE certainly doesn't come up short is on luggage capacity. It's 125 litres bigger than before, with 630 litres available in five-seat mode, which expands to 2,055 litres when the second row is folded away. Mercedes doesn't state a figure for when all seven seats are in play, though – at this point boot space dwindles markedly. It's not a car in which seven passengers and their belongings can travel together. If you’re looking at the five-seat-only plug-in hybrid model, it’s worth noting that the battery robs 140 litres of boot space.

As standard, the Mercedes GLE can tow a 2,700kg braked trailer or an unbraked trailer of up to 750kg. Models with six-cylinder engines can also benefit from a Towing Package, increasing the car’s braked trailer towing limit to 3,500kg.