The MINI Hatch has been improved here, but the boot is still too small and the rear seats too cramped

Practicality is certainly still the MINI Hatchback’s weakest attribute, despite the brand going some way towards addressing the cramped cabin of the old model.

Getting into the back seats isn't too much of a problem, because the front seats fold quite a long way forwards, but there's not much room once you're actually in them. Squeezing in tall adults is possible, but not recommended for long distances. Families with young children probably won’t find it's such an issue, but the five-door hatchback is probably still a better fit if you’ve got children (and their seats) to consider. 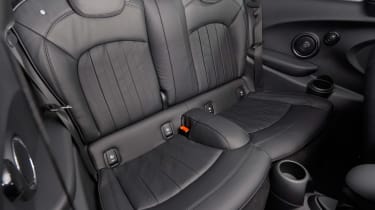 On the plus side, the MINI Hatch has quite a lot of storage areas dotted around the cabin. The dashboard doesn't just get a traditional glovebox – there's also a hidden cubbyhole above it, cup-holders in front of the gearstick and reasonably sized door bins.

Being a small car, the MINI is pretty easy to park, but you can get front and rear parking sensors as an option to help make things easier still. With good all-round visibility and a nice view from all the mirrors, it feels easy to drive around tight, busy city streets. 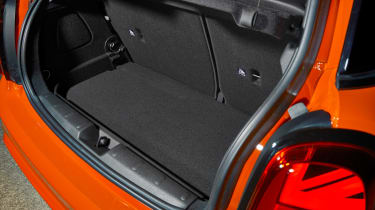 As a result of MINI's hard work, this latest Hatch is longer between the front and rear wheels and has a bigger boot than the old car, but 211 litres still simply isn't enough luggage space, especially when compared to the 292 litres of the Ford Fiesta, and the 351 litres in the Volkswagen Polo. Even the Volkswagen up! – technically a class smaller than the MINI – has a bigger boot.

Yes, you can fold the rear seats down to make more space, but you really shouldn't have to. When you do need to fold those seats, though, it's a fairly simple affair – the seats split 60:40 and drop to create a flat floor. If you want to carry people in the rear at all often, you’d be wise to investigate the five-door variant version which we’ve reviewed separately, or the MINI Clubman, which are both likely to be a better option.