As fun as ever to drive, but also comfortable and refined on long journeys. MINI Cooper S offers serious thrills

To sum up how this new MINI Hatch feels from behind the wheel, it offers a lot of the driving fun of the old car, but with a slightly more grown-up personality. It’s more usable every day, too, as MINI has softened the suspension and cut down on the amount of noise that gets into the cabin on the motorway.

Though all models can put a grin on the driver’s face, the fun really starts on Cooper S models and above thanks to the extra power on tap. Every MINI feels small and nimble and there’s a huge amount of grip. Even the One has little body roll and feels purposeful to drive, but sadly its 101bhp engine can’t really deliver enough performance for you to properly enjoy the chassis.

Some people find that the immediate response from the steering – a traditional MINI characteristic – is too much to deal with and turn instead to rivals such as the excellent Ford Fiesta, which in ST form is even more fun to drive than the Cooper S. In fact, some would say the Fiesta manages to eclipse the MINI for driving fun, while costing markedly less to buy. However, if you really enjoy driving, then chances are you’ll love driving the MINI.

Besides the JCW models, the Cooper S is the sharpest of the bunch, turning into bends as soon as you flick the steering wheel. There's loads of grip and unlike some rivals, you can feel exactly what the tyres are doing. The other cars in the range pull this trick off to a lesser extent, but there's certainly enough to keep most drivers interested from the MINI One upwards. All ride with a slightly firmer edge, but the MINI never feels that uncomfortable, even on models with larger alloy wheels. The MINI hatchback is refined at motorway cruising speeds, too, making it a great all-rounder.

We like the manual gearbox, as it always feels quick and easy to use, but the new seven-speed automatic is also a pretty good choice, shifting more precisely than the old automatic and bringing grin-inducing pops and bangs when you change gear during spirited drives.

Even the basic MINI One feels reasonably brisk, with a 0-62mph time of 10.3 seconds. The pick of the line-up is probably the petrol Cooper (it drops the acceleration down to a nippy 8.0 seconds) but real performance hatchback fans can go for the Cooper S. The petrol-powered S can go from 0-62mph in 6.8 seconds, with pops and bangs from the noisy exhaust along the way.

Above that is the John Cooper Works (JCW) version, which has 228bhp and slashes the 0-62mph time to 6.3 seconds, or 6.1 seconds for the automatic - faster than some more powerful hot hatchbacks. If that’s still not enough, you may be interested in the super-exclusive 302bhp JCW GP version due later in 2020. 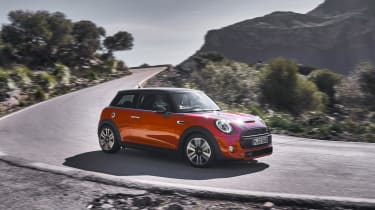 There are four petrols to choose from. The entry-level MINI One has a 101bhp 1.5-litre three-cylinder turbo, while the Cooper is powered by a 134bhp version of the same engine. The Cooper S has a 2.0-litre four-cylinder engine with 189bhp that’s very willing to rev and has lots of power available even from a light touch of the accelerator, making it smooth to drive around town. Given the opportunity, it can sprint from 0-62mph in 6.8 seconds which is plenty quick enough to be a lot of fun.

The MINI Electric is now on sale. It swaps a petrol engine for a 32.5kWh battery pack and an electric motor, and manages 0-62mph in a zippy 7.3 seconds. You’ll manage up to 145 miles on a full charge.