A range of great small engines means the MINI Hatch is seriously cheap to run. There are great servicing deals, too

Petrol engines don’t tend to be as economical as diesels, but they’ve come a long way, and the turbocharged 1.5-litre petrol in the MINI One is claimed to achieve nearly 50mpg (47.9mpg for the automatic) depending on the equipment fitted. CO2 emissions are 114-123g/km for the manual and 109-117g/km for the automatic version. The One makes a lot of sense if you make a lot of stop-start urban journeys. For company-car drivers, the MINI One has a very appealing Benefit-in-Kind (BiK) rating.

There's no real fuel-economy penalty for choosing the 134bhp Cooper – it uses a more powerful version of the same 1.5-litre petrol engine as the One and returns a similar 48.7mpg, producing 109-122g/km of CO2. Bear in mind, though, that choosing bigger alloy wheels will cause fuel economy to drop slightly.

The 189bhp, 2.0-litre Cooper S isn't quite so frugal, with a quoted 44.8mpg figure combined with CO2 emissions of up to 145g/km. That means a much higher BiK rating, but its more expensive running costs are a consequence of the extra performance on offer. 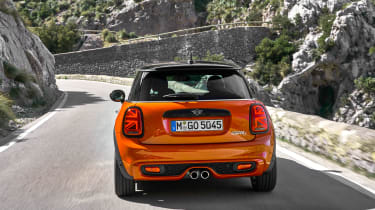 Road tax for all petrol MINI hatchbacks is £145 a year and the first year’s payment is usually included in the on-the-road price. The MINI Electric has free road tax and, from April 2020, will be free to tax for company-car drivers too.

The MINI is a relatively small car, but it actually sits in fairly high insurance groups. The lowest rating (13) is held by the MINI One, the Cooper sits in group 20 while the Cooper S falls into group 28 or 29, depending on trim level.

MINI does offer a scheme called MINI FlexiMile Insurance, which involves your car's mileage being monitored throughout ownership. Drivers who cover less than 6,000 miles per year will qualify for a discount on their insurance if they use MINI Financial Services as the provider.

The warranty on all new MINIs is a generous three-year, unlimited-mileage offer. But if you want something that lasts longer, you can look at Hyundai's five-year cover or Kia's seven-year deal.

MINI's Pay Monthly Service Plan means you can spread the cost of two services into monthly installments. An MOT, seasonal health checks and sat-nav map updates are also included in the deal. You’ll need to speak to your MINI dealer for pricing info.