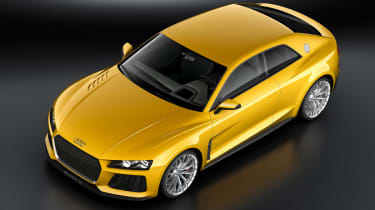 Both the Tokyo and the Los Angeles Motor Shows opened their doors on 20 November, showcasing some of the world’s latest cars, and some of the most important models due in the next 12 months.

Keep reading for our run-down of the best from Japan, with global debuts including the new MINI, Porsche Macan SUV, three concepts from Mitsubishi and the eye-catching Lexus RC coupe.

The big talking point at the Audi stand looks set to be the Audi Quattro Concept. It isn't yet confirmed whether the sports car will make production, but if it is built, the Quattro will become the most expensive car Audi has ever made, with a price of around £125,000. The four-wheel drive, 690bhp model harks back to the original Audi Quattro, which enjoyed huge success in the World Rally Championship during the 1980s.

The Citroen Grand C4 Picasso, a larger version of the standard C4 Picasso MPV, will be one of the firm’s highlights in Tokyo. The larger Grand C4 offers seven seats, a boot that is 69 litres bigger than the outgoing car, and a super-frugal engine capable of 74.3mpg and emissions of only 98g/km. The French firm will also show off an updated version of the C3 hatchback, and a facelifted Citroen DS3 Cabrio convertible, which is set to offer a host of customisable options to help it compete with the new MINI.

While Daihatsu no longer sells cars in the UK, the manufacture is still going strong elsewhere in the world. In Japan, the Daihatsi Copen RMZ concept car is set to be unveiled, and is said to be smaller than a Volkswagen up! city car. It will get an automatic gearbox, a folding hard-top roof and an extremely economical engine. The SUV-inspired Daihatsu Copen XMZ will also be on display, which shares its 600cc engine with the Copen RMZ and features rugged body protection for light off-roading.

Honda will also show off a small economical sports car at the Tokyo Motor Show. The Honda S660 concept car gets a tiny 600cc engine and is and is built to comply with Japan’s strict Kei car rules, which restrict the length, width and engine size of cars. A new small SUV called the Honda Urban SUV, which will be a direct competitor to the Nissan Juke, will also be showcased, as will a plug-in hybrid version of the Honda Accord. The latter will be capable of 138mpg, while the former will feature an engine that can manage sub-100g/km emissions. Meanwhile, a production-ready version of the upcoming Honda NSX supercar will also make its world debut.

Lexus will use the Tokyo motor show to unveil the Lexus RC coupe, which is set to go into competition with cars such as the BMW 4 Series, Audi A5 and Mercedes C-Class coupe. It will likely go on sale in 2014, and will be fitted with a huge 450bhp V8 petrol engine. Smaller-engined models, and a hybrid version, are set to follow later. If fitted with the Lexus IS 300h’s engine, the Hybrid could qualify for sub-100g/km CO2 emission and free road tax. The Lexus LF-NX – a Range Rover Evoque rival that may be priced at around £25,000, will also feature in Tokyo.

The MINI stand will feature one of the Tokyo Motor Show's big highlights – the eagerly anticipated 2014 MINI Cooper. The new car is set to make ‘across the board’ improvements to the model it replaces, with economy, emissions, safety and performance all better than its predecessor. The new MINI will also feature plenty of new equipment such as a head-up display, which projects vital information like navigational instructions, onto the windscreen.

Three new concept cars will feature on Mitsubishi’s Tokyo stand. The Mitsubishi GC-PHEV is a full-size plug-in hybrid SUV that could rival cars such as the Land Rover Discovery, but with much improved economy and emissions figures. It will be joined by a smaller compact SUV called the Mitsubishi XR-PHEV, which will feature the same four-wheel-drive system as the GC-PHEV, but packaged in a sportier body style – similar to the upcoming BMW X4. The third model that will be on display is the Mitsubishi AR (active runabout) concept, which the firm says will "offer both the mobility of an SUV and the occupant space of an MPV". From that description, it is likely that the AR will feature four-wheel drive and a flexible interior, with various seating combinations, and possibly seven seats.

At the Porsche stand, the much-anticipated Porsche Macan SUV will make its world debut. It shares many of its parts with the Audi Q5, but Porsche’s expertise in terms of handling means the Macan is set to become the most fun to drive small SUV on the market. Engines will include a 254bhp 3.0-litre V6 diesel that can return a claimed 46.3mpg and an extremely quick Porsche Macan Turbo version. The car will be priced from around £32,000 and will be joined by the brand-new Porsche Panamera Turbo S at the Tokyo Motor Show.

Subaru will reveal a series of new concept cars in Tokyo. The first is the Subaru Levorg concept, which previews a large estate that is set to go on sale in Japan next year, although it is also likely to come to the UK at a later date. The Subaru Crossover 7 concept will also be on display and is an early attempt at a seven-seat SUV to compete with the Land Rover Discovery.

Like many of the manufacturers appearing in Tokyo, Suzuki’s stand will centre on concept cars, with the firm unveiling a trio of show cars. One of them is the Suzuki Crosshiker concept. It’s a compact crossover, with the dimensions of a city car and raised suspension. It could well point to a replacement for the Suzuki Jimny 4x4, which is starting to feel quite dated alongside more modern competition.

Toyota will be hoping to cause a stir in its home market and to do that it will unveil a handful of concept cars. Most exciting of those is likely to be the Toyota FCV concept. It runs on hydrogen – with the only waste product being water, can travel up to 300 miles, takes three minutes to refill, and is scheduled to go on sale in the UK in 2015 for around £50,000.

Our dedicated team of reporters will be updating the CarBuyer.co.uk website with news from Tokyo as it happens, so keep checking back for all the big stories from Japan.