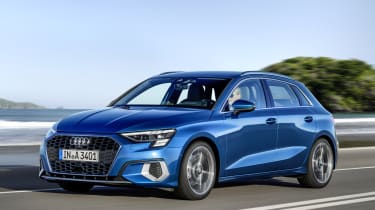 A plug-in hybrid model has joined the new Audi A3 Sportback range. Badged 40 TFSI e, the PHEV joins four petrol and diesel engines in the A3 line-up, and first customers will receive their cars before the end of the year. Prices start at £33,060; this is around £7,000 more than the cheapest A3 model but the PHEV version isn’t offered in entry-level Technik trim.

Audi’s rival to the Mercedes A-Class and BMW 1 Series is once again based on the Volkswagen Golf, just like the SEAT Leon and Skoda Octavia. Besides the five-door hatchback, there’s also a four-door Audi A3 Saloon, which should also be available as a plug-in hybrid soon.

The A3 40 TFSI e pairs a 1.4-litre petrol engine with an 80kW electric motor, giving a total output of 201bhp. Its quoted figures are impressive: 41 miles of electric-only driving, 282mpg and 31g/km in CO2 emissions, with the latter appealing to business users. The PHEV has a tiny 6% Benefit-in-Kind rate (on the smaller wheels), compared to 27% for the cheapest petrol and 29% for the 114bhp diesel.

As with any plug-in hybrid, whether you achieve the claimed economy figures depends on the types of journeys you make and how often you charge the battery. Zero-to-62mph, meanwhile, takes 7.6 seconds, and the top speed is 141mph. This powertrain will also be available in the Leon, Octavia and Golf, and all are likely to cost slightly less than the £33,060 starting price of the A3 40 TFSI e.

Having both an engine and a battery pack does eat into space quite substantially; the A3 plug-in hybrid’s 280-litre boot is 100 litres down on standard petrol and diesel models.

2020 Audi A3 prices and specifications

S line is the first sporty trim level and includes 18-inch wheels, scrolling indicators, privacy glass and sports seats for £29,005. Edition 1 and Vorsprung trims both include even bigger wheels, matrix LED headlights and a black styling pack, and the latter also has a premium sound system and extra driver assistance features. These are noticeably more expensive, though, starting from £34,905 and £40,330 respectively. 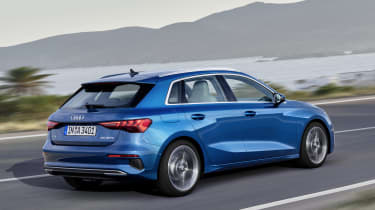 The Audi A3 has never really had dramatic styling changes from one model to the next, but the latest version gets a look that’s inspired by the Audi Q3 SUV. There’s a wider grille at the front, plus redesigned headlight clusters, bonnet grooves and air intakes. It’s a similar story around the back, with Q3-esque tail-lights and a new bumper design. Audi’s designers have given the A3 wider wheel arches than before. Despite being the same height as the current model, the new A3 looks more squat thanks to extra width and length. 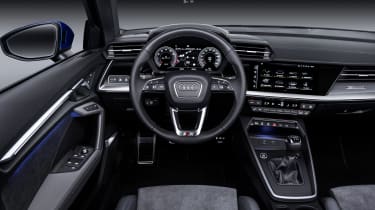 There are almost no similarities between the current A3’s interior and the new one, besides the badge on the steering wheel. Instead of an infotainment screen tacked onto the top of the dashboard, the new A3 gets a screen that’s integrated into the centre console. It’s 10.1 inches and angled towards the driver, who also gets to use a digital instrument cluster that replaces traditional dials. A silver full-width strip lifts the otherwise black cabin, although the driver having air vents at a different height to the passenger seems a little odd.

There’s a new panel for the climate control functions and stylish rocker switches for other features (such as the hazard lights and driving mode selection), and a curious new infotainment dial next to the gear lever that works like an iPod Classic’s scrolling wheel. Like the new Golf and Leon, automatic versions get a small gear selector.

As mentioned above, a digital instrument cluster comes as standard on all models, but the full-size 12.3-inch system is optional, along with a colour head-up display that beams important information onto the lower part of the windscreen.

The infotainment system can switch between six different driver setups, remembering frequent destinations, climate control settings and the seating position for each driver. You can also handwrite letters on the display (handy when inputting a postcode), and Audi says that natural speech can be used to control the voice assistant function.

New technology also includes Car-to-X software, which can communicate with traffic signs, infrastructure and other cars to provide real-time information about vacant parking spaces, nearby traffic jams and if traffic lights are about to turn green. Wireless Apple CarPlay, Android Auto and Amazon Alexa compatibility will all be included, but none of these features nor the Car-to-X will be available from launch. 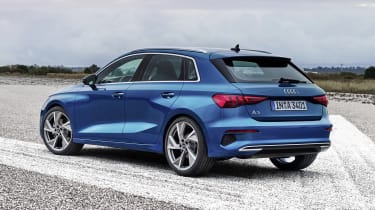 The engine remains relatively unchanged, although mild-hybrid technology arrives on the 148bhp 1.5-litre petrol engine. You’ll also be able to choose from a non-hybrid version of the same engine. Audi claims that the mild-hybrid engine saves almost half a litre of fuel in 62 miles of driving compared to the non-hybrid. Two diesels have so far been confirmed for the UK: a 2.0-litre TDI with either 114 or 148bhp, while the entry-level engine will be a 1.0-litre petrol with 108bhp. A six-speed manual and seven-speed S tronic automatic gearbox will be offered, alongside the option of quattro all-wheel drive with some engines. 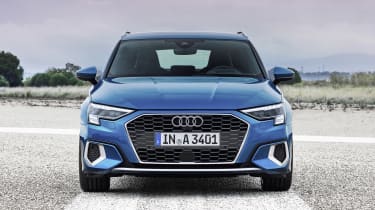 All A3s with 148bhp or more get advanced multi-link rear suspension as standard, while sporty S line cars get firmer suspension that’s 15mm lower. Adaptive dampers will be optional.

The new Audi S3 has already gone on sale, and an even quicker Audi RS3 version will join the range in a year or so. The S3 uses a 2.0-litre petrol engine with 306bhp, shared with the Cupra Leon ST estate, while the RS3 will stick to its 2.5-litre five-cylinder engine with comfortably more than 400bhp. Both versions will only be offered with an automatic gearbox and all-wheel drive.

Take a look at our reviews of the current Audi A3 Sportback, along with the rapid Audi RS3.