How does the Mercedes GLA compare to its premium small SUV rivals? 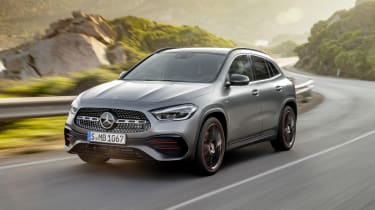 The new Mercedes GLA is now on sale and it aims to tempt customers away from the BMW X2, Volvo XC40 and the Audi Q2. Upmarket SUVs are very popular at the moment, so the GLA also faces up against more practical options that include the BMW X1, Mercedes GLB and Audi Q3, plus the MINI Countryman and Lexus UX. Here, we compare it to its closest rivals.

While the previous GLA looked like a pumped-up hatchback, the new car looks like a proper SUV. As before, it’s based on the Mercedes A-Class, featuring the stunning twin-screen interior and lots of technology. GLA plug-in hybrid and scorchingly fast AMG versions are joining the range too, while the new car has a bigger boot than the A-Class and more rear legroom than before.

The premium badges alone will almost certainly sway some customers, but there’s still a wide choice of cars to choose from within that group. Buyers who favour chunky styling may be drawn to the XC40 and Q2, while the X2 gives a sportier, coupe-ish option - and the GLA finds itself somewhere in the middle. The GLA is instantly recognisable as a Mercedes, and clearly sits between the A-Class and the Mercedes GLC, but we think it’s a little conservative compared with the X2 and XC40. 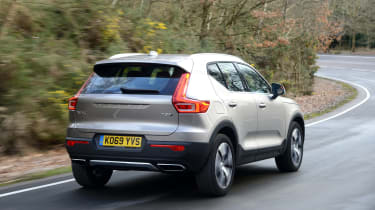 Besides the entry-level Sport trim, the GLA only comes in sporty AMG Line or AMG body kits. The XC40, with its close resemblance to the luxurious Volvo XC90, favours elegance over outright sportiness, although there is an R-Design version to compete against the Q2 S line and X2 M Sport trim levels.

With an interior very similar to the Mercedes A-Class hatchback (and therefore the opulent Mercedes S-Class), the new GLA is a stunning place in which to spend time. The dashboard is dominated by two screens measuring up to 10.25 inches - one replacing analogue dials and one to control the infotainment - but even the air vents are eye-catching. Standard equipment includes heated front seats, two-zone air-con and LED headlights, which is quite impressive even at this price. 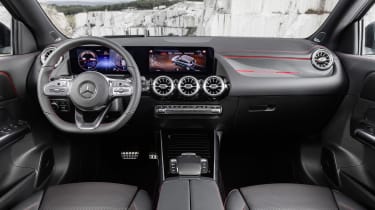 The XC40’s interior feels special, too, as much of it is shared with the company’s more expensive models. There’s a Sensus portrait touchscreen and plenty of high-spec materials, and the former is easy to use once you’ve got the hang of its different functions. Meanwhile, the X2’s cabin is similar to most other BMWs from the last 20 years and, in this company, the Audi Q2’s interior is starting to look a little dated. The impressive Virtual Cockpit system is a pricey option, especially when it’s fitted to nearly every other Audi as standard.

The new Mercedes GLA SUV is noticeably bigger than its predecessor, and that really shows inside. The distance between the front and rear wheels is 116mm longer than before, so there’s much more legroom. Shoulder room is more generous as well, and the driving position is usefully high. Behind the seats are up to 421 litres of boot space, which is slightly more than the last car offered. Should you need seven seats, the boxy, practicality-focused Mercedes GLB SUV will appeal. 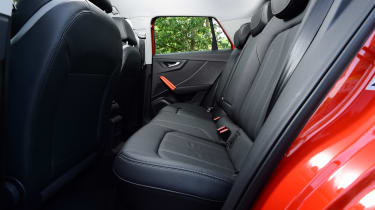 The GLA offers a little more than the 405 litres you get in the Audi but a bit less than the XC40 and X2, which give you 460 and 470 litres respectively. All of these figures are comfortably more than each company’s hatchback equivalents, and the bigger SUV bodywork means all will accommodate four adults with ease. With the seats folded down, all of these cars give you a flattish floor, but the X2 has a slightly higher load lip than the others.

You’ve a choice of two petrol and three diesel engines in the regular GLA range, with petrols offering up to 42.2mpg and diesels returning up to 52.3mpg. These engines, shared with the A-Class, serve up between 148 and 221bhp, and 4MATIC four-wheel drive is optional on the 200d diesel engine and standard on the fast AMG versions. Speaking of which, the Mercedes-AMG GLA 35 and 45 S produce 302 and 415bhp respectively. The AMG 35 hits 0-62mph in 5.1 seconds and the AMG 45 S reduces this to around four seconds, while even the entry-level GLA 200 petrol manages this sprint in 8.7 seconds. A plug-in hybrid GLA is also available, which lets you drive for about 40 miles on electric power, and is also the quickest model in the range. 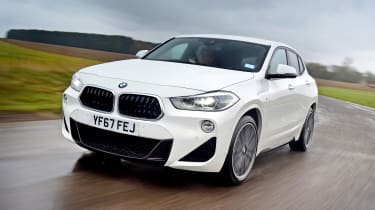 These are easily comparable with those in the BMW X2 range, which also gets a 302bhp M35i performance model. You’d struggle to notice a difference at the pumps between the GLA and X2. The XC40’s MPG figures are slightly lower, and it’s not designed to be sporty so keen drivers will be better off in the X2, GLA or Q2. Thanks to lower-powered options that bring the price down, the petrol Q2s are more economical than the GLA, but diesel Q2s are less economical than equivalent GLAs - blame standard-fit quattro all-wheel drive for that. The X2 xDrive25e and XC40 T5 Recharge are plug-in hybrids (the XC40 gets an electric model too) but we’ve not heard of plans for a Q2 PHEV as yet.

The Mercedes GLA doesn’t do anything groundbreaking and it doesn’t excel in too many areas when compared to its closest rivals; the boot space is average, the styling is neither boxy nor particularly sporty, and the X2 is a little better to drive. But it’s a strong package regardless, and many people will be sold on the interior - which does help to justify the fact that the GLA seems quite expensive. We can see that many customers will like its position in the pack, offering a balance of sportiness, comfort, performance and efficiency. Don’t be surprised if you suddenly see a lot of people driving the new GLA in the coming months.