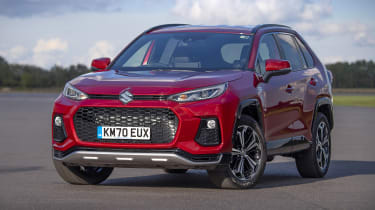 UK prices and specifications have been revealed for the new Suzuki Across plug-in hybrid SUV. It’s essentially a rebadged Toyota RAV4 - which will get the same PHEV powertrain in the next few months - and costs £45,599. You can now order the Across, although Suzuki says there’s a very limited supply of cars in the first year.

Rivals include the Ford Kuga PHEV, the Peugeot 3008 GT Hybrid4 and the MG HS Plug-In, but the Across is far more expensive than we were expecting. It costs more than nearly all its rivals, and is almost the same as the BMW X3 xDrive30e. The Across does feature a powerful engine, four-wheel drive and a class-leading electric range, but it’s hard to consider the car as good value.

Like the Toyota RAV4 plug-in hybrid, the Across uses a 2.5-litre petrol engine and an electric motor on each axle. Suzuki quotes a CO2 emissions figure of 22g/km, which means the Across can enter low-emissions zones without being charged. The low CO2 figure will also appeal to company-car drivers, as it’ll incur a low 6% Benefit-in-Kind (BiK) rating in 2020/21.

Suzuki claims the Across can manage over 46 miles of electric range, compared to 30-35 miles for many of its rivals. Acceleration from 0-62mph, meanwhile, takes just six seconds, and most rivals aren’t as quick. Four driving modes are offered in the Suzuki, so you can choose how the petrol engine and electric power are used. 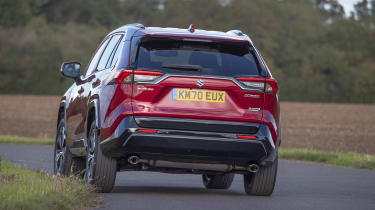 Having an electric motor on each axle means the Suzuki Across SUV has four-wheel drive. The power can be shifted across the axles, so 100% can be sent to the front, or 80% to the back, depending on the situation. There’s an automatic limited-slip differential that manages which individual wheels get power and which are braked, with the aim of maintaining traction off-road.

The Suzuki Across gains a new face with redesigned LED headlights and a slim top grille. Below that is a much bigger grille, a couple of extra air intakes and a new silver skid plate. But while the front bumper and headlights are all-new, every other body panel is shared with the RAV4. Polished 19-inch alloy wheels are fitted and customers get a choice of six paint colours. 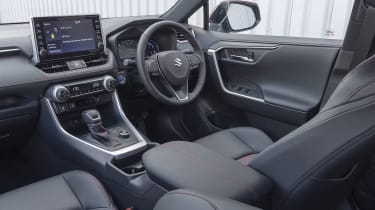 Changes are even harder to spot inside. Besides fewer bits of chrome trim and what looks like a conventional set of dials, the interior has been carried over entirely from the Toyota. It gets the same switchgear, steering wheel and nine-inch infotainment screen, albeit probably with different graphics. The touchscreen comes with Apple CarPlay and Android Auto as standard.

Each front-seat occupant gets a handy storage tray in the dashboard and there’s a smartphone-sized tray in front of the gear lever. Suzuki claims a 490-litre boot, which is bigger than the Renault Kadjar’s but slightly smaller than the RAV4 PHEV’s 520-litre boot.

Safety features are plentiful, with radar cruise control, lane-keeping assist, road sign assist, blind-spot monitoring and a rear cross-traffic alert all fitted. As a result, the Across should share the RAV4’s five-star Euro NCAP rating.

The Suzuki Across’ stats are impressive but the hot hatchback-like performance and four-wheel drive seem unnecessary. It means the price is far higher than it should be, at over £20,000 more than Suzuki’s next costliest SUV, and Toyota’s clunky infotainment system seems incongruous in a car costing £45,000. You can also get electric SUVs for much less than the Across, which seem better options for business buyers (tax is free for EVs) and customers looking to go green.

Read where the Toyota RAV4 features on our list of the most reliable SUVs, or read our other Suzuki reviews.