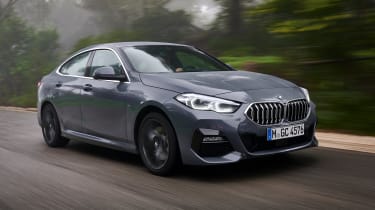 It appears German manufacturers aren't giving up on the saloon segment yet because despite its 'coupe' roofline, the BMW 2 Series Gran Coupe has four doors and a bootlid. Its main rivals are the Mercedes CLA and A-Class saloon, along with the Audi A3 saloon, and BMW promises a more refined and enjoyable driving experience than the one offered by the 1 Series on which the car is based.

The 2 Series GC’s looks are sure to grab attention because BMW's move to a larger kidney grille has been divisive. The nose is pure 1 Series, with a different grille design depending on the trim level you choose, while the rest of the car is somewhat more traditional. There's a curved roofline and a short 'fastback' tail with particularly wide rear LED lights, accentuating its width. A small 'ducktail' spoiler and twin exhausts ensure the car has a sporty appearance.

Inside, the layout of the BMW 1 Series has been used to good effect, with the same clear digital instrument cluster and easy-to-use central screen. Trim levels are simple; Sport has stylish 17-inch alloy wheels and LED headlights, along with convenience features like cruise control and dual-zone climate control. Above it, M Sport adds 18-inch alloys, leather upholstery and a different bodykit. 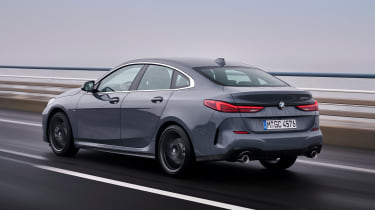 BMW is clearly keen to see how popular the car proves because just three engines are offered at first; one diesel and two petrols. The former is a 187bhp 2.0-litre turbocharged diesel, badged 220d, with front-wheel drive and a standard automatic gearbox. It can get from 0-62mph in a swift 7.5 seconds and return up to 56mpg. The entry-level petrol 218i is fitted with a 138bhp 1.5-litre three-cylinder turbo, getting the Gran Coupe to 62mph in just under nine seconds. It’s the only version with a manual gearbox.

For a much more high-octane experience, the M235i xDrive Gran Coupe is also offered, with 302bhp and four-wheel drive catapulting it from a standing start to 62mph in a Mercedes-AMG CLA 35-rivalling 4.9 seconds.

The 2 Series Gran Coupe is powered by a range of petrol and diesel turbocharged engines, offering a decent blend of performance and reasonable running costs. The petrol range kicks off with the 218i, fitted with a 1.5-litre engine that’s capable of returning up to 45.6mpg with CO2 emissions of 123g/km. This compares to 46mpg for the Mercedes CLA 180, while both sit in a middling BiK band for company-car drivers. 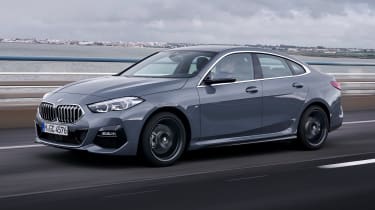 The diesel BMW 220d has a larger 2.0-litre four-cylinder engine, managing up to 56.5mpg with CO2 emissions of 110g/km. This is exactly the same emissions as the Mercedes, while fuel-efficiency is a fraction better at 57.7mpg.

Opt for the high-performance M235i xDrive with twice the power of the 218i, and fuel-efficiency drops to 37.2mpg, with CO2 emissions of just over 150g/km.

Just like the Mercedes CLA that's based on the A-Class hatchback, the 2 Series Gran Coupe shares its underpinnings and most of its parts with the BMW 1 Series hatch. To help separate the two, BMW has softened the suspension settings for the Gran Coupe somewhat, in a bid to improve refinement.

That's exactly how it feels; while it's hardly wallowy, the Gran Coupe does smooth out bumpy roads that would jostle the hatch. Impressively, BMW also seems to have given the steering a touch more feel, and the 2 Series Gran Coupe feels impressively balanced in corners. If you weren't aware, it would be hard to tell power was sent to just the front wheels, such is the car’s composure. The brakes don't disappoint either, with good feel and lots of stopping power. 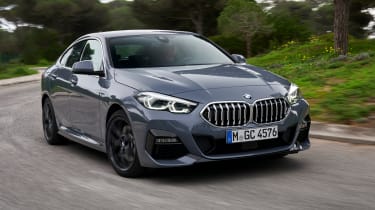 The BMW 220d is fitted with a 2.0-litre turbocharged diesel engine for an impressive 187bhp and 400Nm of torque. Power is sent to the front wheels and acceleration from 0-62mph takes 7.5 seconds, with a top speed of 146mph. A smooth-shifting eight-speed automatic gearbox is fitted to the 220d as standard. 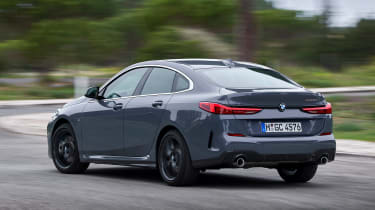 If, like an increasing number of UK buyers, you'd rather stick with petrol instead, the 218i is available. It's fitted with a 1.5-litre three-cylinder turbo (related to the engine found in a MINI Cooper Hatch) making 138bhp. It's not quite as quick as the diesel, taking 8.7 seconds to get from rest to 62mph, and a manual gearbox is standard.

The M235i xDrive Gran Coupe is an entirely different proposition, with a 2.0-litre petrol and large turbo serving up 302bhp. Aided by the traction of its four-wheel-drive system, 0-62mph flashes up in 4.9 seconds, matching the Mercedes-AMG CLA 35.

The interior is almost a carbon-copy of the 1 Series', which is no bad thing. The TFT instrument display is crisp and BMW's iDrive user interface is intuitive, and the dashboard is more driver-focused than in the CLA. Quality is up there with the best cars in the class, and the M Sport version with Dakota leather seats is especially premium. 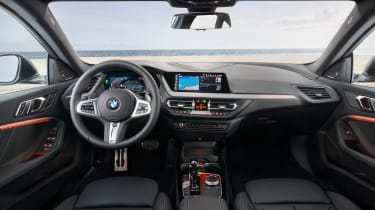 Upgrade to M Sport and a 10.25-inch screen is included, along with the aforementioned leather upholstery, ambient lighting, and anthracite headlining, heated seats and M Sport steering wheel.

As you'd expect, there are also plenty of options to boost convenience and personalise the Gran Coupe, if you so desire. A £1,500 Tech Pack adds adaptive LED headlights, autonomous parking, a head-up display and a wireless charging pad for smartphones. There's also two levels of BMW's Comfort Pack offering LED exterior lighting, heated front seats and 'anti-dazzle' mirrors. The next level adds a heated steering wheel, electric seat adjustment and unlocking via your smartphone.

While saloons have steadily fallen in popularity, there's been a surge in the four-door coupes offered by manufacturers of late. One reason to pick the 2 Series Gran Coupe over the 1 Series could well be space because boot space is improved over the hatchback. There's 430 litres of space, soundly beating the 380 litres of the five-door and just 50 litres off the size of the BMW 3 Series. The CLA is even bigger though, beating the Gran Coupe by 30 litres, and for some, the 1 Series will still be more usable because of its taller hatchback. 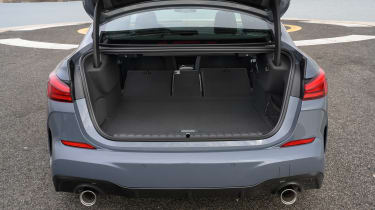 The 2 Series Gran Coupe’s practicality is boosted further by 40:20:40 rear seats. Rear legroom in the Gran Coupe is pretty good too; two six-foot tall adults can comfortably sit in tandem.

The 2 Series Gran Coupe is a new model based on a relatively new platform, so the jury is still out on reliability. BMW as a brand has been performing below expectations recently, coming just 25th out of 30 manufacturers in our 2019 Driver Power satisfaction survey. 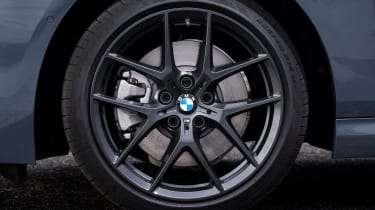 Just over 22% of respondents told us their car had one or more faults in the first year, while running costs and servicing bills were reportedly high. Owners praised build quality, acceleration and infotainment.

Safety is less up for debate because the closely related 1 Series achieved a full five-star rating from Euro NCAP in 2019. Considering the 2 Series is virtually identical, a similar score should apply. The 1 Series was awarded 83% and 87% in the adult and child occupant safety categories respectively, along with a high 76% score in the 'Vulnerable Road Users' section that assesses the safety of cyclists and pedestrians.