Although bigger than before, the Mercedes A-Class doesn’t quite measure up against some more practical rivals 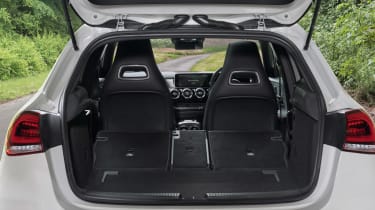 While sitting and travelling in the front seats of the Mercedes A-Class is a joy, rear-seat passengers may find themselves a little cramped. There’s a big boot on offer – 29 litres larger than the old model's – but the A-Class is still outclassed on this front by some much cheaper cars. And while the BMW 1 Series, Audi A3 and Volkswagen Golf are all offered in a range of bodystyles, the Mercedes A-Class is only available as a five-door hatchback.

There’s more space inside this Mercedes A-Class than there was in the old car, but not by much. 30mm has been added to the wheelbase (the space between the wheels), but it’s hard to notice as much on the inside.

Rear-seat passengers suffer the most; headroom has improved over the old car, but there’s a high floor to content with, meaning knees sit high. If you plan to regularly carry adults in the rear – especially over long distances – you’d be better served by a Volkswagen Golf or similarly family-orientated (and cheaper) alternative.

The A-Class has a 370-litre boot with the seats up, or 1,210 with the standard 40:20:40 split rear seats folded – 10 litres more than a five-door BMW 1 Series on both counts, but 10 litres smaller than an Audi A3 Sportback in either case. The good news is that the Mercedes’ boot is better-shaped than before, with a wider opening that makes loading and unloading large items easier. There’s now space for a set of golf clubs, too.

While very few examples will be used for towing, Mercedes has provided towing weights for each of the A-Class’ engines. The A 250 petrol wins the tug-o-war, managing an unbraked trailer of 725kg or a braked one weighing 1,600kg. A180d models can manage 720kg and 1,400kg of unbraked and braked trailer respectively, while the A200 petrol manages 685kg unbraked or 1,600kg braked.