The Mercedes A-Class offers decent economy and emissions figures, but insurance and servicing could be pricey 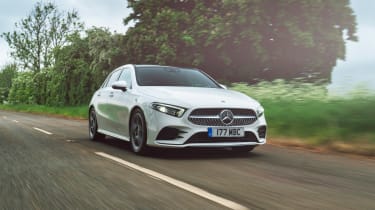 With its lighter construction, improved aerodynamics and up-to-date engines, this A-Class is more economical and emits less CO2 than the previous model. There are eight engines to choose from, all of which return figures that stack up fairly well against premium rivals. The Mercedes A 180 d with an automatic gearbox is the most frugal diesel engine, producing 62.8mpg on average – the Audi A3 2.0-litre TDI Sportback with an automatic gearbox returns 62.8mpg and the BMW 116d automatic manages 60.1mpg. Petrol Mercedes A-Class models offer relatively attractive economy and emissions figures, too, thanks to new technology introduced for the latest model.

For the first time, the A-Class is available as a plug-in hybrid, putting Mercedes a step ahead of its rivals. No other car in this class offers a useable all-electric range that can match the 42 miles claimed by the A 250 e, with only the discontinued Volkswagen Golf GTE getting close. BMW will launch a PHEV version of the 1 Series in the near future, with Audi waiting until the A3 is replaced before launching a plug-in variant.

Currently the smallest diesel engine on offer, the 114bhp, 1.5-litre A 180 d, is the most frugal choice; economy is a claimed 62.8mpg on average (with 16-inch wheels) – a figure that’s similar to what Audi and BMW manage. Emissions range from 120 to 122g/km of CO2, depending which size of alloy wheel is specified. We recommend sticking with the standard 16-inch alloys on the entry-level SE for a lower road tax amount in the first year, as speccing larger 17- and 18-inch alloy wheels increases the amount due. Sticking with smaller wheels (and therefore larger-sidewalled tyres) also has the happy side-effect of better ride comfort. The A 200 d and A 220 d return up to 57.7mpg and 55.4mpg respectively, and all diesels occupy the upper echelons of the Benefit-in-Kind (BiK) bands for company car drivers.

Of the petrol options, the 160bhp, 1.3-litre A 200 offers the best blend of performance, economy and emissions. An official figure of 47.9mpg takes into account the 17-inch wheels on the Sport model, as does the CO2 figure of 135-138g/km. Opting for 18-wheels doesn't adversely affect the economy or emissions figures.

Higher in the range, there's the A 250 2.0-litre with front-wheel drive. Fuel economy and CO2 emissions are a reasonable 41.5mpg and 156g/km. As the most powerful A-Class in the standard range, the A 250 sits towards the top of the BiK bandings.

The A 250 e plug-in hybrid uses a turbocharged 1.3-litre petrol engine in combination with a 75kW electric motor to give this model 215bhp. With a claimed 42 miles of pure-electric driving range, the A 250 e is the most efficient model in the range with a claimed official economy figure of up to 282.5mpg. It's also the greenest, emitting 24g/km of CO2, placing it in the lowest BiK banding for company-car drivers. 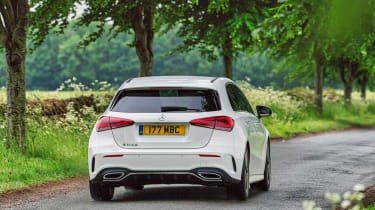 The most powerful engine in the standard range is also the least economical, but not by a huge margin. The 302bhp, 2.0-litre A 35 AMG returns a claimed 35.8mpg on average and emits 184-193g/km of CO2. The result is a high first-year tax payment, although this will be included in the car’s on the road price. The A 35 and A 45 S also hit the top BiK rate for company-car users but the extra performance should be worth the additional tax if you value a sportier drive.

Road tax for all models (after the first year's CO2-weighted payment at purchase time) is £150 a year. You could spec an A-Class to over £40,000 with a few options, so models over this threshold are subject to the £325 surcharge in years two to six.

The A 250 e plug-in hybrid is the only A-Class that is compliant with low emissions zones, with its CO2 output of 24g/km meaning it can be driven in the London Congestion Charge zone without incurring a charge.

All models have a 43-litre fuel tank – taking claimed figures into account, that means the A180d should manage a theoretical range of around 650 miles – although this’d probably be closer to around 550 to 600 miles in real-world driving. The A 200 has a theoretical range of around 485 miles, while the A 250’s drops to around 430; we’d wager on real-world ranges of 450 and 400 miles respectively.

As with all Mercedes cars, the A-Class is covered by an unlimited-mileage/three-year warranty, including ‘Mercedes Roadside Assistance’ for the duration. This is matched by the warranty offered on new BMWs, but better than Audi's 60,000-mile/three-year guarantee with roadside assistance.

Mercedes offers a flexible servicing plan called ServiceCare, which allows buyers to spread the cost of servicing across a series of payments, or simply make a one-off payment. Mercedes guarantees its parts and labour for "up to three years".