The Mercedes A-Class is the class leader on the interior front: design, quality and technology are all excellent 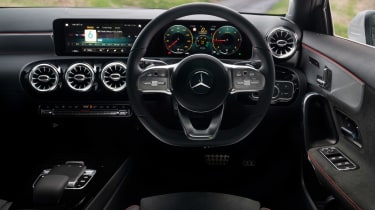 Mercedes went back to the drawing board for its latest A-Class, not least on the inside. You won’t find a better interior in the class – or even in the class above. Quality is excellent, the design is futuristic yet understated and the levels of comfort on offer are exactly as you’d expect from any Mercedes, never mind one intended to serve as a family hatchback. Exemplary, up-to-date infotainment makes the A-Class feel far more modern than the competition.

However, considering the Mercedes A-Class seems intended to be comfortable and luxurious above all else, its ride quality is a little disappointing at lower speeds. The ride quality of the A-Class is no better than that of a Volkswagen Golf, and it feels more unsettled by the biggest optional alloy wheels. For the best ride quality, the A 250 is the model to go for, as its multi-link rear suspension is more sophisticated than the torsion beam setup on lesser models. In this guise, the A-Class deals with broken tarmac and bumps much more competently and consistently.

Weighing in at 150kg more than a standard A-Class, the A 250 e offers a mixed ride compared with its conventional petrol and diesel counterparts. While not harsh, it can lack the same level of composure on rough roads.

The star of the show in the A-Class’ interior is its dashboard. All models benefit from a pair of seven-inch infotainment screens as standard, one of which sits behind the steering wheel in place of traditional analogue dials. One or both of these screens can be increased in size to 10.25 inches apiece as an option, offering an immersive and thoroughly modern take on infotainment. The comprehensive functionality of these screens means a simplified layout for the rest of dashboard, which is relatively free of buttons and trimmed in great-quality materials. While the smaller screens are still far better than in the old A-Class, they miss out on the 3D mapping and myriad of customisation options of the larger items, so it’s worth upgrading if your budget can stretch.

The current A-Class range is relatively simple: there are three engines to choose from and three core trim levels with SE, Sport and AMG Line. Buyers can also opt for expanded versions of the two higher spec trim models, with Sport Executive and AMG Line with either Executive, Premium or Premium Plus packs.

SE can be specified with the A 180 and A 180 d engines only and brings a good level of standard equipment. Two seven-inch infotainment screens are standard, along with ‘MBUX voice activation’ – a voice-command system for controlling basic functions – DAB radio and sat nav with three years of free live traffic information updates included. Cruise control with a speed limiter, keyless go, a multifunction leather steering wheel and fabric/man-made leather seats are also included, along with exterior details like 16-inch alloys and LED daytime running lights. A comprehensive pack of active safety equipment is also standard, while automatic headlights and wipers are fitted to all models.

Both the A 180 d and A 200 models can also be specified in Sport and Sport Executive trim, which to the SE’s standard equipment adds 17-inch wheels, chrome trim and LED headlights to the exterior, along with carbon-fibre-look trim and a different combination of fabric/man-made leather upholstery inside. Two-zone climate control is the biggest technological addition to the interior. For now, it’s the trim level we’d recommend.

Top-spec AMG Line trim is available with all three engines and is the only option if you want the top-of-the-line A 250 petrol and the A 250 e plug-in hybrid. Its features over the Sport include 18-inch alloy wheels and sportier body styling, including unique trim for the front bumper, rear bumper and side skirts, along with visible exhaust pipes. The grille also gets a bespoke design. Inside, microfibre/man-made leather upholstery with red stitching features, alongside a Nappa leather multifunction steering wheel and optional aluminium trim. However, it's disappointing that parking sensors are only available on the options list or by upgrading to a high-spec trim. 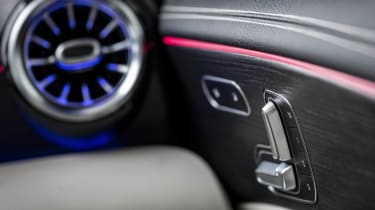 The standard equipment list might be good but Apple CarPlay and Android Auto are optional on the A-Class, costing £495, which feels a bit miserly when it comes as standard on some less expensive cars.

Mercedes options lists are notoriously in-depth and often pricey, and the A-Class’ follows suit. The most useful to consider are divided into easily-digested packs that Mercedes calls ‘equipment lines’. The cheapest of these is the Executive equipment line, which adds power-folding door mirrors, an auto-dimming interior mirror, a central 10.25-inch infotainment display, Parktronic and heated front seats for around £1,400 as an addition to all models.

The Premium equipment line costs around £2,400 and brings the two largest-possible infotainment screens, 64-colour ambient interior lighting, illuminated door sills, keyless entry, a ‘mid-range’ stereo and a rear armrest. We recommend it if you can spare the extra when ordering your Sport or AMG Line A-Class and want its interior to seriously impress and for the sophisticated infotainment to be optimised – although it’s worth noting that full leather seats are not currently offered on the options list.

Step up to Premium Plus for around £3,600 and memory-function front seats, adaptive LED headlights and a panoramic sunroof are added to the mix. 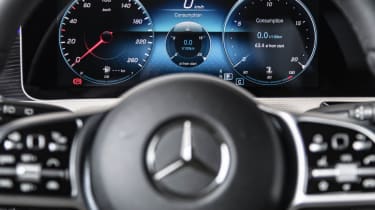 A real selling point for the Mercedes A-Class is its MBUX infotainment system, which not only leads the class but also betters the system currently offered in most other, more expensive, Mercedes cars. In fact, the system has more processing power than that in the range-topping Mercedes S-Class saloon. There’s a screen behind the steering wheel that replaces traditional dials, showing the usual range of speed and engine information alongside sat-nav directions or other infotainment features; the central screen, meanwhile, offers control over most major functions in an intuitive fashion.

Making sure you’ve specced a larger central screen will mean you can make the most of all this cutting-edge infotainment. The optional ‘Advanced Navigation Pack’ adds a clever augmented reality sat-nav system that uses the car’s front-mounted camera to show images of the road ahead overlaid with direction information. It works well and should make sure you don’t miss a turn.

Less successful is the standard ‘MBUX’ voice recognition system, which can be activated simply by saying ‘Hey Mercedes’ and allows you to operate the climate control, ambient lighting and other parameters – or even to ask about sat-nav information or the weather. However, we found that only around 20% of our commands were successfully recognised and translated into actions.

It’s also worth noting that Mercedes has fitted the A-Class with up-to-date USB-C ports in place of standard items – good news for modern smartphone owners, but those of us with older devices will need to invest in an adaptor.