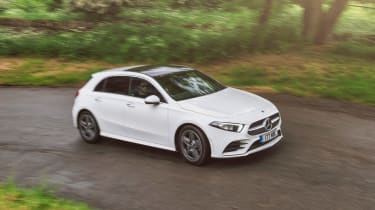 While its main rivals offer a more overtly sporty take on the compact premium car, the Mercedes A-Class puts relaxation first. All versions besides the A 35 AMG feel rather less powerful than their official power and performance figures suggest, possibly because it’s so refined. Rather than being a fun-to-drive hot hatch, the A-Class drives more like a smaller version of Mercedes’ larger cars – the steering is slow to respond, but it’s accurate, grip is good and the car is easy to drive. Responses and feedback aren't on par with those offered by the BMW 1 Series or Audi A3, though – at least not for enthusiastic drivers.

For everyone else, the A-Class is perfectly suited to everyday driving – it comes into its own on the motorway, where it’s refined, comfortable and happy to settle into a relaxed cruise. More versions will be introduced in time and electrification is also on the cards, with an all-electric variant following the plug-in hybrid A 250 e model.

The least powerful petrol engine in the range is all-new for the latest A-Class. It's quite small at 1.3 litres, but is turbocharged to achieve a mix of performance with competitive emissions and economy figures. It’s not the option for enthusiastic drivers because although its 9.2-second 0-62mph time is reasonable on paper, it feels a little strained and harsh under hard acceleration. However, treated with a lighter touch, the A 180 settles nicely into a cruise and the standard seven-speed DCT gearbox provides smooth changes. Top speed is 134mph. The A 200 also uses this engine but, with power bumped up to 160bhp, 0-62mph is completed a second quicker and the top speed rises to 140mph.

The A 250 benefits from a more powerful 2.0-litre engine, offering 221bhp, which provides acceleration more akin to that of a hot hatch – 0-62mph takes 6.2 seconds in the A 250, while top speed is 155mph. However, it doesn’t feel as punchy as a sportier rival like the Volkswagen Golf GTI, so don’t expect an electrifying drive. Instead, the A 250 is competent, controlled and covers big distances effortlessly. It's also worth knowing that the A 250 has an upgraded rear suspension, so handles better and is more comfortable than lesser models in the A-Class range. 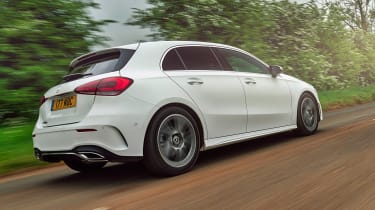 The single plug-in hybrid model of the A-Class range, the A 250 e, offers 215bhp from a turbocharged 1.3-litre petrol engine mated to a 75kW electric motor. Mercedes claims a pure-electric driving range of 42 miles, with enough instant torque to give it a hot hatch like 0-62mph time of 6.6 seconds. On the road, the A 250 e is quiet and refined when running on pure-electric power at speeds of up to 87mph. The 1.3-litre petrol engine can sound a little coarse when it’s in use and you work it hard. The car’s top speed is 146mph.

Despite being the most frugal engine in the current line-up, the 1.5-litre A 180 d isn’t a complete slouch – its in-gear punch means it feels faster than its 10.5-second 0-62mph time suggests. Don’t feel you’ve missed out on extra performance by picking the diesel: chances are it’ll feel faster in real-world situations like overtaking and accelerating on motorway slip roads. Top speed is 126mph.

The small diesel is also impressively smooth and refined – more so than the larger four-cylinder diesels found in many more expensive Mercedes – and works well with the seven-speed automatic gearbox. This is slick and responsive to change gears, so much so that we doubt the six-speed manual will be as well suited to the car.