Surprisingly for such a big car, the Mercedes S-Class won’t cost the earth to run

Unless you go for one of the AMG or large-capacity petrol models, the Mercedes S-Class actually has fairly reasonable running costs. Granted, it’s not at all cheap to buy in the first place – the cheapest (well, least expensive) model costs over £76,000, while at the top end, you can spend as much as £183,000 before options.

In pure numerical terms, the cheapest S-Class to run is the plug-in hybrid S560e, which we’ve reviewed separately, thanks to its claimed 128.4mpg fuel economy. It also emits just 59g/km of CO2 and is consequently exempt from the London Congestion Charge, and the London Ultra Low Emission Zone charge, while sitting in the lowest Benefit-in-Kind (BiK) company-car tax bracket. These are astonishing figures for a car that weighs the thick end of 2.5 tonnes.

However, the S560e will set you back over £97,000, so you’ll have to do an awful lot of miles to get your money back – which will in turn increase depreciation. So, unless you’re doing most of your driving in town (it’ll do up to 27 miles in all-electric, zero-emission mode) then you’re probably better off with a diesel model. 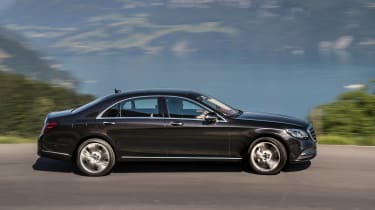 The S350d 3.0-litre straight-six diesel is the cheapest model in the range to buy and impressively economical, too. Mercedes claims this engine will return 44.1mpg and emits 160g/km of CO2 earning it a middle-rate BiK tax contribution banding.

Beyond these versions, running costs get pricey. The S500 manages around up to 36.2mpg thanks to a new straight-six petrol engine producing CO2 emissions of 171g/km. Frankly, you shouldn’t even contemplate more powerful models as company cars, as they’ll cost a fortune. The worst offenders are, unsurprisingly, the high-performance AMG models.

The 4.0-litre Mercedes-AMG S63 is a little more economical than the previous 5.5-litre model, but at 24.4mpg overall it won’t win any friends at Greenpeace. The same is true of its CO2 emissions which tops the range at 231g/km. If you can afford the purchase price, you can probably afford the tax bill, though.

All petrol and diesel S-Class cost £145 per year to tax after the CO2-weighted first year payment included in the on-the-road price, while the hybrid S560e costs £135. The S-Class has a list price far beyond £40,000 and so qualifies for the surcharge of £320 per year for the five years following the first year's payment at registration time. That'll bring your total bill to £465 for petrol and diesel models, or £455 for hybrids.

Unsurprisingly, given the S-Class’ high purchase price and desirability, it sits in the higher echelons of the insurance group table. Even the cheapest models are in group 44, while at the top end of the range, group 50 is the norm.

Mercedes says that you should get your S-Class serviced every 15,500 miles or once a year – whichever comes first. There are two different services, which alternate. The ‘A’ service is much smaller and includes an oil change, oil filter change, fluid level checks and making sure all the electrics are working properly. The ‘B’ service is much more comprehensive.