A gorgeous interior, groundbreaking technology and fantastic ride quality make the Mercedes S-Class a great car to spend time in

The S-Class has always been well known for its impeccable comfort and refinement and this latest model is the best yet. At 70mph, you can't hear any wind rushing past, or even the engine. There's a tiny bit of noise from the tyres, but it's all so quiet that you can actually whisper to your passengers.

Replacing the usual instrument cluster and infotainment screens are two 12.3-inch TFT screens placed side-by-side and behind a one-piece glass screen for a seamless look. The one in front of the driver houses the dials you’d usually find in the instrument cluster and also shows relevant information, such as sat-nav directions.

The central screen houses the interface for the COMAND infotainment system, which is operated by a rotary controller in the centre console, although there’s also a touchpad that you can use like a laptop track pad, or to draw out letters and numbers. Smartphone integration is standard too, with both Apple CarPlay and Android Auto included along with a wireless charging pad. 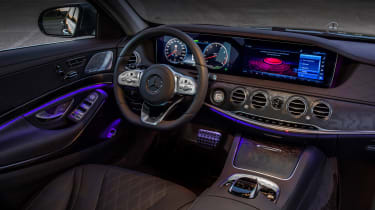 Naturally, this system also comes with voice control and will also read out your text messages. It’s easy to use, while what few buttons and switches remain are well placed and easy to use.

As you might expect from a car costing the thick end of £75,000 (at the very least) the quality of the materials on show is first-class. The leather upholstery is soft, while the trim pieces – be they wood veneer or brushed aluminium – feel absolutely top-class and the soft, thick carpets ooze quality, too. Everything feels brilliantly put together.

The single trim level for the standard Mercedes S-Class models is now called Grand Edition. You can also go for a high-performance AMG version or the standalone uber-luxurious Mercedes-Maybach model.

Grand Edition specification cars get leather upholstery and wood veneer trim, while 20-inch alloy wheels are also standard. You also get two-zone climate control, Parktronic with a reversing camera, an electrically adjustable steering wheel, as well as all-LED headlights and taillights. Electrically adjustable heated front seats are standard, too, as is a CD/DVD player. You also get the choice of seven different shades of ambient interior lighting. 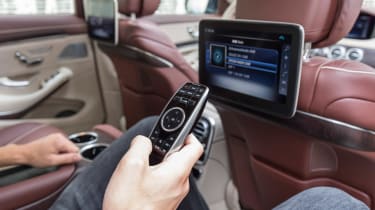 As you go up the trim levels, you get more and more luxurious equipment available – some of which is limited to certain engines – and are too numerous to go into too much detail here. Top-spec models offer a split front screen – which shows the driver something relevant to them (sat nav, for example) while the passenger watches TV on the same screen.

If you go for the optional Executive Seat package you can recline with your legs fully stretched out in the rear seats, even if you're six feet tall. The Mercedes-Maybach model is so long that you can specify four seats in the rear – two facing two. You can also choose a heated and cooled massage function for all seats, including one that supposedly mimics a hot stone massage. Built-in screens for watching TV or accessing the internet are available, along with a wi-fi hotspot and an incredible 24-speaker stereo.

As well as all the luxuries, you get an incredibly comfortable suspension setup that cushions you from every single bump in the road. Only cars like the Rolls-Royce Ghost can match the S-Class for comfort. Amazingly, you can also specify your S-Class to come with a specific fragrance diffused through the air-conditioning system.

As of April 2018, the top-of-the-range Mercedes-Maybach S-Class will be available with a choice of nine exclusive and rather expensive-looking two-tone paintjobs (with a hand-applied clear coat), two new exclusive interior trim colour combinations and unique 20-inch alloys. The Maybach model also gets a new grille to set it apart, with thin vanes inspired by a pinstripe suit.

Much like the latest BMW 7 Series it's up against, the Mercedes S-Class comes packed with a huge amount of modern technology – some of it already mentioned. For music fans, the 13-speaker Burmester stereo system is one of the most impressive we've ever tried. It was highly commended in the Best Audio System award category at our 2016 Car Tech Awards, and only lost out to the Bowers & Wilkins system in the Volvo XC90 because it's around twice the price. There are various options for playing music, including SD card slots, a 10GB Music Register (a hard drive) and the possibility to play videos through the car's large display screen. 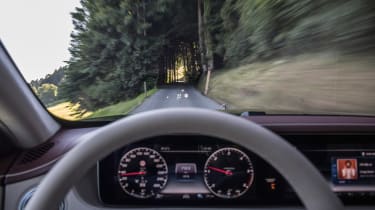 Rear-seat passengers aren't left out, though. In fact, they're very well catered for if you opt for the two individual 10-inch screens mounted on the back of the front seats, although they have the same issue as the two 12.3-inch screens in the front - the graphics and overall design are looking a little dated, and aren't quite as intuitive to use as BMW's iDrive system or Audi's MMI.

In terms of safety technology, the S-Class has plenty - both as standard and on the options list. There's the usual features like adaptive cruise control, autonomous emergency braking and blind-spot monitoring, but you can also add a lane-departure warning system and a semi-autonomous driving package that will slow the car down and speed up again in stop-start traffic. This is even more advanced in the updated S-Class, using not only road-scanning sensors, but also sat-nav data, to adjust the car’s speed for corners, junctions and toll booths. At speeds from 35 to 120mph, just indicating left or right will prompt the S-Class to change lanes automatically when there’s a gap in traffic. 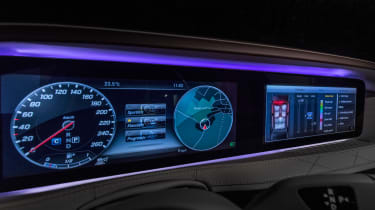 There's theParktronic system to help with parking the long S-Class, plus cameras all around, and the car will perform a parallel park or bay park manoeuvre. We found it struggled with the bay park, but it's still impressive that a car of this size can do these things on its own. Mercedes is also introducing a feature similar to one available on the Audi A8 and BMW 7 Series, whereby you can park the car remotely using a smartphone app.