Smoothness, refinement and comfort are the watchwords for the Mercedes S-Class here

As a luxury saloon, the S-Class is all about delivering a comfortable, refined and above all relaxing experience – whether you’re sitting in the front or the back. However, the split personality of the Mercedes-AMG badged versions is really quite something.

Serene relaxation has always been one of the S-Class’ strengths and this generation is no different. If you want something to whisk you along comfortably and quietly without any fuss in the lap of high-tech luxury, then the S-Class is definitely the car for you. True, it’s not the most entertaining car in corners, but that’s not what it was designed to be. 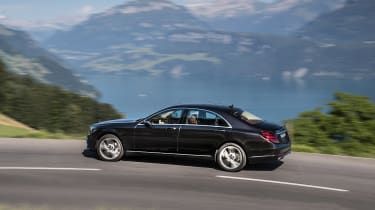 That said, it grips very well and body lean is well controlled if you corner vigorously (although if this is the case, then you may want to make sure your chauffeur is trying to save you from some impending danger, rather than just driving too quickly).

Thanks to what Mercedes calls ‘Magic Body Control’, all versions of the S-Class have ride comfort that is unparalleled by anything this side of a Rolls-Royce. This system scans the road ahead using a variety of sensors, radars, cameras and scanners, looking for any lumps and bumps. It then sets the suspension up accordingly to best deal with what’s coming up. Even without this system installed (it’s a cost option) the standard air-suspension copes with bumps very well. A new feature called ‘curve tilting’ will arrive after making its debut in the Mercedes S-Class Coupe; it allows the suspension to subtly lean the car into corners like a Pendolino train.

Mercedes-AMG models are quite an experience to travel in. With the exception of a little more noise from the huge tyres, an S500 or S63 can cruise just as smoothly as other versions, but if you exercise a little more vigour with the accelerator, they turn into very serious sports saloons. Not only are they astonishingly fast in a straight line, but their enthusiasm for corners belies their imposing bulk.

You can forgive such a heavy car for having steering that feels a little over-assisted, and it does gain a little feel and a sense of precision when you begin to attack a twisty road. In fact, you soon forget you’re in a huge luxury saloon – you can confidently drive this Mercedes quickly. The Jaguar XJR arguably flows in a more natural way, but the S63 and S65 feel every bit the four-door supercar.

The S-Class petrol engine line-up is impressive and ranges from the sensible to the sublime. In the former category is the S560e plug-in hybrid, with its 3.0-litre petrol engine boosted by an electric motor. It has a claimed 27-mile all-electric operating range and an impressive turn of speed. We’ve reviewed it separately.

Then comes the Mercedes-AMG models. The S63 previously used a 5.5-litre twin-turbo V8, but in the interests of economy and emissions, it’s now shrunk to just 4.0 litres. However, power junkies can be reassured that there’s been no toning-down here; in fact, this more efficient engine produces 604bhp compared to 577 of the previous one.

It uses a nine-speed dual-clutch automatic gearbox, which changes gear with lightning speed. There’s a Sports+ mode with even quicker responses that opens an exhaust valve so the V8’s battle cry is no longer smothered. If you’re looking for a restrained, subtle saloon with a race-car roar, look no further.

The latest S63 can dispatch the 0-62mph sprint a tenth of a second quicker than the previous version, in 4.3 seconds. The long-wheelbase S650 Maybach offers the same power, but its extra weight increases the 0-62mph time to a still-impressive 4.7 seconds.

Every petrol-engined S-Class is electronically limited to 155mph. The cruise control has a speed-limiter function, which is fortunate, because you’ll often find yourself going alarmingly fast without really noticing it – such is the refined nature of the performance. 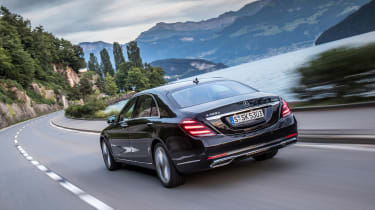 The previous V6 diesel was pensioned off in 2017 in favour of a new straight-six 3.0-litre with 282bhp in the S350d or 335bhp in the S400d. We’ve tried both and it’s noticeably smoother than the previous engine, with sharp responses and a quiet growl when you accelerate. The S350d will be all most will ever need, with so much acceleration on tap it makes the large S-Class genuinely fast. With a sizeable reservoir of torque from just above idle, overtaking slower cars is the work of a moment, with almost no fuss. It’s hard to see why you’d need to spend the equivalent of a city car to upgrade to the S500 petrol.