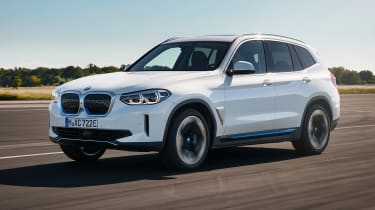 The new BMW iX3 will start at £61,900 in Premier Edition trim. BMW’s electric SUV is available to pre-order now, with the first customer cars slated for delivery in summer 2021.

The BMW iX3 is the German manufacturer’s first fully electric SUV, and will rival the Audi e-tron, Jaguar I-Pace, Mercedes EQC and Tesla Model Y. The X3 becomes the first BMW model to be available with a choice of petrol, diesel, plug-in hybrid and fully electric power. 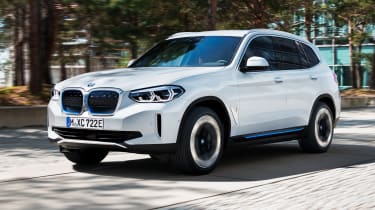 The iX3 can be had in one of four paint colours called Carbon Black, Mineral White, Phytonic Blue and Sophisto Grey. Two contrasting exterior trim packages are also available, with a choice of brushed aluminium or gloss black.

The flagship model also features BMW’s IconicSounds Electric, an acoustic feedback system which emits unique sound patterns in the interior that change depending on how the car is driven. This also includes a short sound composition that can be heard when the driver starts the car, which is the result of a collaboration between BMW’s sound engineers and composer Hans Zimmer.

The styling of the iX3 bears a strong resemblance to the standard petrol and diesel-powered BMW X3 but it also has aerodynamic alloy wheels, blue accents and a fared-in grille. The decision not to create a radical design was entirely deliberate and distances the iX3 and its future SUV companions from BMW's less traditional i3 and i8 models.

BMW claims future 'i' models will be distinguished by 'signature looks', by which it means subtle design touches to easily restyled parts such as the bumpers and side skirts, rather than big sheet-metal alterations. The iX3 bears testament to this – its front bumper incorporates slimmer ventilation intakes and smoother contours than the more aggressively surfaced regular X3, and the side skirts and rear bumper are reprofiled, too – the latter incorporating a distinctive diffuser section. 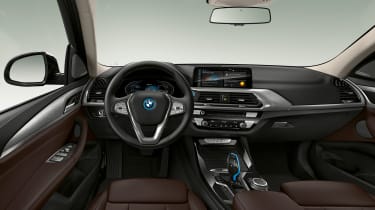 Just as with the exterior styling, the iX3’s interior is familiar. Most of it is shared with petrol and diesel-powered X3s, like the 10.25-inch iDrive infotainment touchscreen and much of the switchgear. In the iX3, the 12.3-inch digital instrument display is fitted as standard, while there are a few touches specific to the electric model, including a new steering wheel with silver buttons and a blue-ringed BMW badge, and a blue flash on the gear lever.

A 282bhp motor provides the power, which gives the iX3 a 0-62mph time of 6.8 seconds and a limited top speed of 112mph. It’s quicker than the xDrive20i petrol engine and the xDrive20d diesel, which hit 0-62mph in 8.3 and 7.9 seconds respectively, but the 282bhp xDrive30d diesel is the fastest-accelerating model in the standard X3 range. Most electric SUVs have a motor on each axle for four-wheel drive but the iX3 is rear-wheel drive, which is perhaps why it’s not quite as quick as the xDrive diesel model. 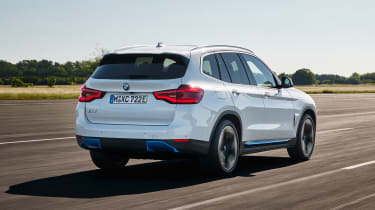 When the 80kWh battery is fully charged, you’ll be able to travel up to 285 miles, according to WLTP testing. Plugging into a 150kW public DC charger allows 80% battery capacity to be achieved in 34 minutes, while AC charging at up to 11kW is also included. Fast chargers are more likely to be found on the motorway, while the AC chargers are more suited for use at home or work.

BMW says its latest battery is lighter and more energy-dense than before, which should result in greater efficiency and a more accurate range during motorway driving. The iX3’s advanced energy recuperation system also works with sat nav data to automatically adjust the level of brake regeneration according to the road ahead. 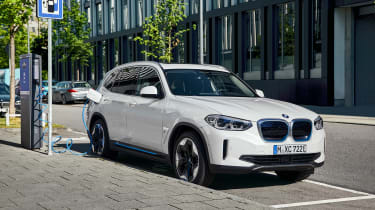 Buyers of the iX3 get 510 litres of boot space to fill, which is only 40 litres fewer than petrol and diesel models. Rear passenger space is said to be unaffected by the electric powertrain.

The iX3 will be the first of many electric BMW SUVs and will share its electric drivetrain with the forthcoming BMW iNEXT SUV.

It also seems that the iX3 will be the first of many electric variants of models in the BMW range – the company has trademarked every combination from iX1 to iX9, which hints that a wide electric SUV range will eventually arrive. It represents the next step in BMW's electric-car strategy, which sees BMW complementing today's i3, forthcoming BMW i4 and sporty i8 coupe with a range of fully electric versions of its core models. 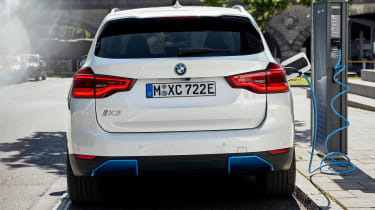 BMW says that future vehicles will be developed with electric power in mind from the outset, and that its architecture will cater for front, rear and all-wheel-drive layouts. This means that any newly launched model could be offered in conventionally fuelled, hybrid and electric form. The company also promises progress in automated driving, connectivity and digital services, which are being developed under the umbrella banner 'iNEXT'.

Read about the best electric SUVs to buy this year.