The new Porsche 911 isn’t cheap to run, but it compares favorably with its closest rivals 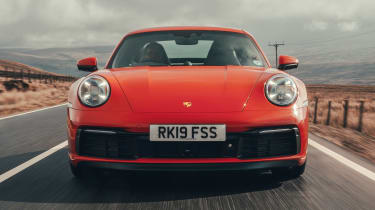 The Porsche 911 is the traditional benchmark for usability in the luxury sports car market and the latest iteration lives up to its reputation. Its claimed economy and emissions figures are better than some lesser performance cars, and while servicing and consumables may be expensive, this is par for the course in the class.

The 911 is more efficient than the Audi R8, with its 5.2-litre V10 petrol engine and economy of 25mpg. The 3.5-litre V6 hybrid version of the Lexus LC coupe (boasting claimed figures of 44mpg and 149g/km of CO2) beats the 911 on this front but the V8 version is more of a match for the 911 in performance terms but can only manage around 25mpg.

Across the 911 line-up, the model designations are separated by ever higher power outputs, with the option of four-wheel drive for the Carrera and Carrera S models. The Turbo S is the fastest and most powerful 911 you can buy until the latest generation of ‘GT’ monikered cars arrives. Unlike the 911s of old, turbocharging has now been adopted across every model in the line-up, making them more efficient than their predecessors.

The entry-level 911 Carrera coupe is capable of 26.2-27.4mpg depending on specification, with the four-wheel drive Carrera 4 model returning a similarly decent 25.9-27.9mpg. Emissions range from 233g/km to 247g/km for both versions of the Carrera.

The Carrera S returns a claimed 25.4-28mpg on average, making it very slightly more economical than the standard Carrera, while the Carrera 4S returns 25.4-27.7mpg. The Carrera S emits 229-251g/km of CO2 and the Carrera 4S 231-253g/km; these figures both slot the 911 into the highest possible Benefit-in-Kind (BiK) bracket for company-car tax.

Stepping up to the flagship Turbo S, which is the both the most powerful and thirstiest version of the 911, you can expect economy of 23-23.5mpg. Unsurprisingly, it also has the highest emissions of the range, emitting 271-278g/km of CO2.

Road tax for all models is £150 per year, plus £325 per year for years two to five of ownership thanks to the 911’s high list price. First-year road tax is rolled into the on-the-road price, but thereafter your annual bill will be £475 for five years. 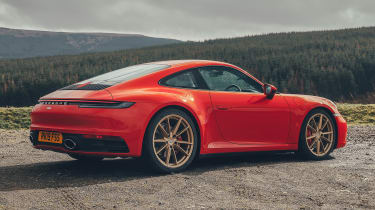 No Porsche 911 is exempt from the London Congestion Charge, though plug-in hybrid and all-electric version are tipped to arrive in a few years’ time.

The Porsche 911 Carrera S slots into group 50 – the highest insurance group possible. Most of the 911’s major rivals are also in this group.

The Porsche 911 requires a service every 20,000 miles. Prices for servicing for the 992-generation car are yet to be released at the time of writing, but those for the previous model were £675 for a 20,000-mile service and £120 for a brake fluid change. A 111-point check (at £216) is required if you want to take out a Porsche Approved Warranty.