The ‘premium’ hatchback class is now well established, but the Audi A3 created it in the first place. When the first-generation A3 launched in the nineties, nobody had thought to give a family hatchback the build quality and luxurious interior of an executive saloon.

Today, as well as the A3, upmarket hatchbacks like the Alfa Romeo Giulietta, BMW 1 Series, Mercedes A-Class, Lexus CT and Infiniti Q30 offer numerous choices, with their own quirks.

The Audi A3 range has grown quite a bit, too, with the five-door Audi A3 Sportback, four-door Audi A3 Saloon and convertible Audi A3 Cabriolet all offering a different twist – with each getting its own full review on Carbuyer. The most extreme version is the Audi RS3 (available as both Sportback and saloon), with four-wheel drive and a potent engine. 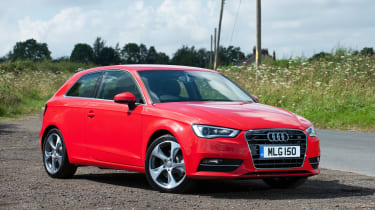 Audi has clearly gone to significant lengths to keep the A3 unique and protect its image, despite the fact it shares most of its hidden parts with the Volkswagen Golf, SEAT Leon and Skoda Octavia. Its styling is anything but shouty though, with a subtle design that relies on sharp creases and assertive features like its unmistakable grille and intricate headlights.

Technology impresses inside, so much so that the Audi A3 won the Best In-Car Connectivity award for cars under £25,000 at our Car Tech Awards in 2016. Smartphone users will love the fact Apple CarPlay and Android Auto are standard, so you can use Google or Apple Maps with the central infotainment display and controls. Choose the wireless charging pad and compatible phones will also be topped up without trailing any wires near the gearlever. The A3 also took home the prize for the Most User-Friendly Tech in its price bracket.

The A3 range offers a petrol or diesel engine to suit most drive’s needs. The petrol engines, which range from 1.0 to 2.0 litres in size, will suit enthusiastic drivers and those who don’t cover huge yearly mileages. None are slow – even the entry-level 113bhp 1.0-litre is a very appealing engine to use, while the 187bhp 2.0-litre is very quick and can still approach 50mpg. There’s also an extremely fast S3 model with 306bhp – but look beyond the 40mpg economy and its running costs are rather on the high side.

Business users and those who cover over 12,000 miles a year might find the added economy of the diesel engines of interest. The least powerful 114bhp 1.6-litre TDI can exceed 70mpg and has low CO2 emissions, which is good news for company-car Benefit in Kind (BiK) tax and Vehicle Excise Duty (VED) bills alike. Those who need more power will still find the 2.0-litre 148bhp version reasonably economical – versions with 16-inch wheels can exceed 65mpg.

Six-speed manual or a dual-clutch automatic transmission can be chosen – the latter with seven gears. The dual-clutch (known as ‘S tronic’ by Audi) is a very good gearbox and actually improves fuel economy on some versions. It’s also a sought-after on the secondhand market, so can boost your car’s resale value.

The Audi A3 is a predominantly front-wheel-drive car, but Audi’s quattro four-wheel-drive system can be ordered on certain models. Most drivers are unlikely to find it an advantage, though – its increased grip on damp and greasy roads comes at the cost of a higher purchase price and reduced fuel economy.

On the road, the A3 is an enjoyable car to drive, with responsive engines and good grip, but it doesn’t quite match the sheer driver appeal of the sharp, responsive BMW 1 Series. It used to be that the A3 had a rather stiff, uncomfortable ride, but this is now much improved, making long motorway journeys a pleasure. 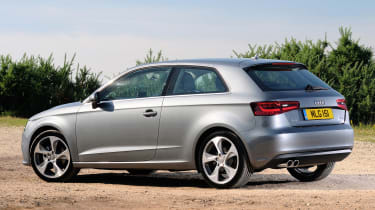 The Audi A3 range finished 35 out of the 75 cars ranked in our 2017 Driver Power owner satisfaction survey of cars currently on sale in the UK. There are no doubts over safety – the A3 was granted a full five-star rating when it was tested by Euro NCAP.

With safety and solidity, style and speed, the Audi A3 has a lot going for it and deserves the attention of anybody shopping for a premium hatchback.