There are a number of different ways to charge your electric car’s battery pack. Here’s our comprehensive guide 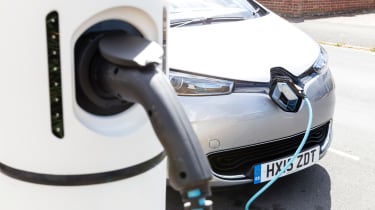 Charging an electric car battery is a big issue for those who own an electric car. Without enough charge, you may not be able to complete your planned journey. So how and where do you do your charging?

Essentially, you have two options when it comes to charging your electric car’s batteries: you can either charge it at home using your own domestic mains electricity supply, or you can make use of public charging points. There are, however, a number of different issues that you need to take into account, such as how long it’ll take to charge your car, how much it will cost and whether there are any Government schemes to help you out.

Keep reading for an in-depth guide to charging your electric car.

When it comes to charging at home, you have a couple of choices. You can either plug it in to a standard UK three-pin socket, or you can get a special home fast-charging point installed. 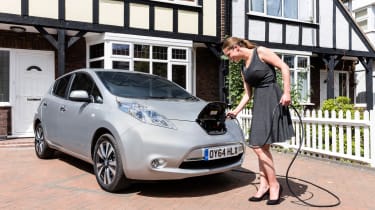 Go for the former and it’s easy and convenient, but it’s also the slowest option. Charging using this method can take many hours, depending on the size of the battery. Meanwhile, if you go for a home fast-charging point, then you have to arrange to have it installed, but you get much faster charging times as a result.

This grant is available to anyone who owns or uses an eligible electric or plug-in car, including company car drivers. A full list of eligible cars can be found here. Bear in mind that fast-charging points can only be installed by an approved contractor.

However, you don’t have to apply for the grant. Some car manufacturers will supply you with a complimentary home fast-charging point with your electric car.

How long will it take to charge my electric car?

How long it takes to charge an electric vehicle (EV) at home depends on a number of different factors, including which car you have, its battery capacity and what sort of charging system you’re using. 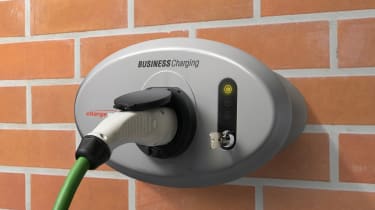 The charger’s speed will depend on how many kilowatts (kW) it can provide, and how many your car can accept: the higher the number of watts the car can handle, the faster the car will charge. At home, you get a choice of two speeds:

It’s important to remember that not all cars are compatible with fast charging, either because their wattage is too low or because their connector doesn’t fit with the fast-charging unit. For example, the entry-level Nissan Leaf can only be charged at a maximum of 3.7kW, which means it’ll take up to 8 hours to fully charge.

Also, slow and fast charging can come with different plug connectors. Most slow chargers will use the Type 1 connector. This can be plugged into either a fast-charging point or directly into the domestic electricity supply via a regular wall socket. The other main type of connector is the Type 2 seven-pin connector that can be plugged only into a proper EV charging point. This is more common on fast-charging cars, but you will find it on some slow-charging models.

How much will it cost to charge my car at home?

Again, this is entirely dependent on exactly what sort of electric car you’ve got. Some – especially those with short electric ranges – won’t need as much electricity to fully charge the batteries, so they’ll cost you less, but you may have to charge your car more frequently than other models. The principle is the same in a car with a small petrol tank – it’ll cost less to fill up, but you won’t be able to cover as many miles as a car with a far larger tank.

One thing is for certain, however, and that’s that it will cost you considerably less to charge an electric car that it would to fill a car’s fuel tank with petrol or diesel. We suggest that you get yourself on an Economy 7 electricity tariff as this means that electricity will be much cheaper in the dead of night, significantly reducing the cost of charging your car. Even fully charging your car from ‘empty’ should cost you no more than a few pounds if you charge it overnight on this sort of tariff.

There will be occasions when the charge you get at home won’t be enough for you to reach your destination, or for you to get back home again. Under these circumstances, you’ll need to make use of the rapidly expanding network of public charging points. 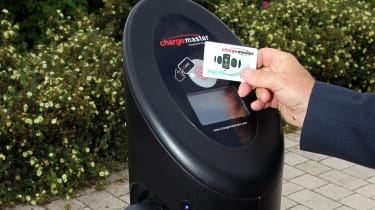 How do I find a public charging point?

A lot of new electric cars come with a sat nav system that will direct you to the nearest charging point. Alternatively, there are websites that list the position of charging points and can even show whether or not they are in use or not. These include Zap-Map, which shows the charging points nearest to where you searching from, what sort of connector they are compatible with and how fast they’ll charge your car.

Nationwide, there are around 6,800 locations offering over 11,100 individual charging stations (as of January 2019). Around 200 are now being added every month, so the number of car charging points is on course to overtake the UK’s 8,500 fuel stations within the next couple of years. Of course, a fuel station tends to have many pumps, whereas electric vehicle charging points may only have a couple of chargers. You won’t be surprised to learn that the vast majority of charging points are found in cities and urban areas, and are much more sparse elsewhere.

How do I use a public charging point?

Often, the charging point will include a lock around its cable to stop it from being disconnected (either maliciously or accidentally). You’ll usually need to use the swipecard or app again to disconnect the electricity supply and unlock the cable.

Be aware, however, that different providers may have different ways of doing operating their charging points, so it’s worth doing specific research into how each company works. This will avoid or reduce the amount of time spent in the pouring rain trying to work out how on earth you work that particular charging point.

Which charging points can I use?

You’re limited by a number of factors when choosing which public points you can use. Firstly, there are a number of different operators that own the charging points. Companies like Chargemaster, Polar and Ecotricity are some of the biggest, but there are also a variety of regional ones.

To use these, you’ll often have to become a member, which means you pay a flat fee each month for unlimited use of that company’s charging stations. As different operators often dominate different regions, it’s wise to join a number of schemes. 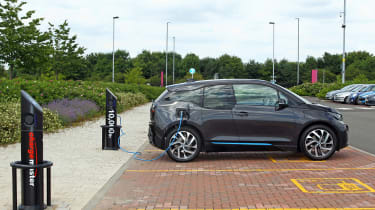 Joining Polar, the biggest company, costs around £8 a month, but some providers don’t charge at all. For example, Zero Carbon World doesn’t ask you to subscribe and there’s no charge to use its stations, either, while Nissan allows Leaf owners to use the charging points at its dealerships.

It’s Tesla that’s forging ahead with charging, however. It provides a UK network of around 300 ‘Supercharger’ charging points for owners of its Model S and Model X electric cars, plus another 500 or so ‘destination chargers’ at hotels, restaurants and landmarks. Use of the Superchargers is no longer free, as the number of owners increases and the company looks to become more profitable. Tesla’s Superchargers now cost about 24 pence per kW/h to use.

The points provide what’s known as rapid charging and can give you as much as an 80% charge in just 30 minutes, meaning you can stop for a coffee and be on your way again with the best part of the car’s full range. If you’re going to buy the smaller Tesla Model 3 saloon electric car, however, it’s worth noting that you also won’t have free use of the Supercharger network.

Charging on the motorway

Only Ecotricity provides charging stations on the motorway, with about 50 charging stations offering around 300 individual chargers. Not so long ago, these were free to use, but the company has recently introduced a £6 charge for 30 minutes of use. If, however, you also get your electricity from Ecotricity, then you’re eligible for 52 free charges per year.

The company was criticised for this move, but it defended itself by saying that the charge was introduced to stop plug-in hybrid (PHEV) owners from ‘hogging’ the charging points when ‘pure’ electric cars have more need. This is because, unlike PHEV owners, pure electric vehicles rely on their battery packs alone, a PHEVs has small petrol or diesel engines that will top up its battery pack if necessary. Some manufacturers, like Tesla, have introduced ‘idle fees’ that penalise drivers who stay parked in electric car spaces after their battery has finished charging. 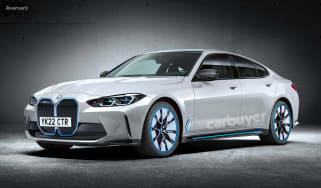 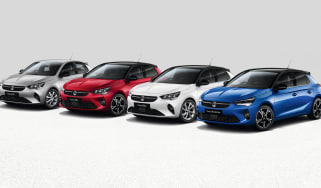