UK car registrations at highest since 2004, according to official industry figures 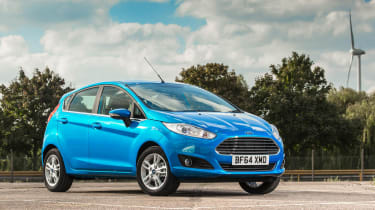 Last year was the best year for new car registrations in ten years, according to official figures. The Society of Motor Manufacturers and Traders said that more than 2.47m new cars were registered during 2014.

The Ford Fiesta was once again Britain’s best-selling car, with more than 131,000 models registered. It was followed by the Ford Focus, Vauxhall Corsa and Volkswagen Golf.

A wide range of attractive finance deals are among the reasons for the growth in sales. Around 75% of buyers use some sort of finance package. The most popular type is a Personal Contract Plan (PCP).

The figures showed that superminis, such as the Fiesta and Corsa, and crossovers, like the Qashqai and Juke, continue to grow in popularity. There has been a shift to more upmarket brands like Audi, and sales of low emission models continue to grow, though the 14,500 registrations are still a small fraction of the market.

The SMMT’s chief executive, Mike Hawes, said: “The year was incredibly strong – stronger than we expected,” but he was still “cautiously optimistic” about continued growth this year.

He said registrations are likely to slow to around 1%-2% in 2015, but the market could still achieve 2.5m sales.

The report showed that Britain produced 1.5m cars in 2014 – around the same number as 2013, which Hawes said was “slightly disappointing”. Around 80% of UK-built cars are exported and a disappointing economic performance in European markets has hampered growth.

However, 2015 should be a strong year for British manufacturing, with MINI and Nissan Qashqai sales being bolstered by the Land Rover Discovery Sport and the launch of the Jaguar XE.

UK car manufacturing is expected to reach an all-time high in 2017.