"The Audi Q3 is a small SUV with an upmarket design and interior, which goes head-to-head with the BMW X1 and Mercedes GLA"

The Audi Q3 gave the German company a presence in the fiercely contested compact SUV market for the first time. The success of its bigger Audi Q7 and Audi Q5 stablemates gave it a ready audience, with many keen to be seen in an Audi SUV, but neither needing or wanting to pay for anything bigger.

It was an immediate hit and recaptured many buyers who'd strayed from the Audi A3 hatchback in favour of rival SUVs, and now competes directly with the Range Rover Evoque, BMW X1 and Mercedes GLA, as well as offering an alternative to high-spec versions of the Kia Sportage, Volkswagen Tiguan, Nissan Qashqai and Renault Kadjar. 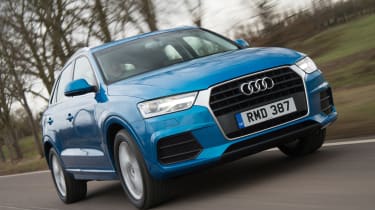 Relatively little under the surface of the Q3 was all-new on its launch – its mechanical platform is shared with the Volkswagen Golf and Volkswagen Tiguan and its wide range of petrol and diesel engines appear in many other cars with VW, Audi, SEAT and Skoda badges. This means they're well proven, though, and most buyers will find a happy compromise between power and fuel economy.

A 148bhp 1.4-litre and 178bhp 2.0-litre engine fulfil the demands of petrol fans, while diesel devotees can choose 148 or 182bhp versions of a 2.0-litre TDI. The two less powerful engines come with front-wheel drive as standard, or can optionally be teamed with Audi's quattro four-wheel-drive system. This is likely to be more of interest for those who live in rural areas with frequent poor weather and broken road surfaces than for those with serious off-road intentions, though – the Q3 is very much designed for life on the tarmac. Four-wheel drive noticeably saps fuel economy, too, although the S tronic automatic gearbox it comes with is one of the best around.

With an appeal all of its own, though, is the 335bhp Audi RS Q3. It shares its 2.5-litre turbocharged engine with the Audi RS3 and is one of the fastest compact SUVs you can buy – but if its 4.8-second 0-62mph time is too slow for you, a still more powerful RS Q3 Performance version reduces that time by half a second, putting 362bhp at your disposal. It's a real alternative to the Mercedes-AMG GLA 45.

The RS Q3 is expensive, though – both to own and run – so it's good news that the regular Q3 can be bought in S line trim, which has a good deal of the RS' visual appeal. This includes sporty 18-inch alloy wheels and lower suspension, while sports seats introduce a racy feel to the interior. LED headlamps and rear light clusters are also standard, as are a powered tailgate, all-round parking sensors and cruise control.

The range-topping Black Edition is even more distinctive, with its 19-inch wheels and gloss-black exterior features. The lesser models – while rather more down-to-earth – are far from barren when it comes to standard equipment. The entry-level Sport still has a 6.5-inch infotainment display, Bluetooth, DAB digital radio, climate control and rear parking sensors as standard. With front-wheel drive and a manual gearbox, the 148bhp Q3 Sport diesel can manage over 60mpg. 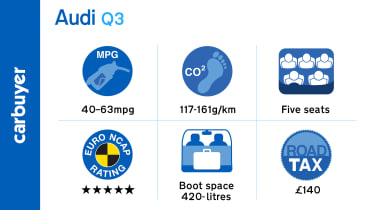 Regardless of trim level, the interior feels solid and well finished, although the Q3 is starting to lag behind newer models in the Audi range like the Q5 and Q7, which get ‘Virtual Cockpit’ instrument clusters and a more up-to-date infotainment system.

Despite the raised height of the Q3, it doesn't lean as much in corners as you might expect. There's not a huge amount of driver involvement on offer, though – the BMW X1 gives more feedback through its steering and is generally more fun to drive. The Volvo XC40 is appreciably smoother-riding, too, particularly compared to Q3s fitted with very large alloy wheels and S line suspension. We recommend taking a test drive before before you add these to your order form – they make the ride rather firm.

The Audi Q3 finished 13th out of the 75 cars ranked in our 2017 Driver Power owner satisfaction survey of cars currently on sale in the UK. Boot space is adequate for a small SUV, and four adults can travel in comfort and safety, as evidenced by a five-star Euro NCAP crash safety rating.