"The Tesla Model S is fast, refined, well equipped and practical. It also doesn’t come with as many compromises as some other electric cars"

It could be argued that Tesla has done more to shape the electric car market than any other brand. Considering the independent company started off with the Lotus Elise-based Tesla Roadster, it’s remarkable the Model S was only the second Tesla to hit the market.

While the low-volume Roadster attracted praise for its explosive acceleration, it fell rather short on day-to-day practicality. The Model S strikes a rather more useful balance of space, comfort and luxury, while formidable performance is still on tap. And thanks to ever-improving battery technology, the Model S can offer very impressive range on a full charge. Since it first arrived, the Model S has been constantly updated, both with over-the-air software updates and more substantial mechanical upgrades. It doesn't look likely to go anywhere soon either, with Tesla instead confirming it will seek to revamp its existing saloon into the foreseeable future.

The limited driving range of electric vehicles is one factor that has curbed their popularity against conventional petrol and diesel cars, but the Tesla Model S Long Range Plus model has the longest range of any pure-electric car, and this is bound to increase its appeal against its premium saloon car rivals, such as the BMW 7 Series 745e and Mercedes S-Class 560e plug-in hybrid models and premium electric models like the Porsche Taycan. Tesla also boasts its own well-established ‘Supercharger’ electric charging network, and is able to wirelessly transmit software updates for its cars – with the potential to boost their electrical efficiency without you knowing it.

Unlike many electric and hybrid cars on the market, the Model S has the advantage of being designed as an EV from the ground up, so there are none of the compromises in comfort and passenger or luggage space that often result from converting a petrol or diesel car to run on electricity. Rather than just being a sophisticated box of gadgets, the Model S is also very strikingly styled. It appeals on an emotional level as an object of desire and is therefore highly sought-after. Straight after launch it began to appear outside upmarket addresses, sharing driveway space with Ferraris and Porsches.

The UK Tesla Model S line-up currently consists of two models. The 100kWh battery pack Long Range Plus and Performance models, offering up to 405 miles of range in the former and, in the case of the Performance, a scarcely believable 2.3-second 0-60mph acceleration time when ‘Ludicrous Mode’ is engaged. In early 2020, a wireless update added ‘Cheetah Stance,’ which puts the car into an optimal setting for launches from a standing start. If you can resist using all that acceleration, a 396-mile range is promised. The less performance-focused Long Range Plus is the first EV to offer a range of over 400 miles on a charge, and its 3.7-second 0-60mph time should still be swift enough for most. 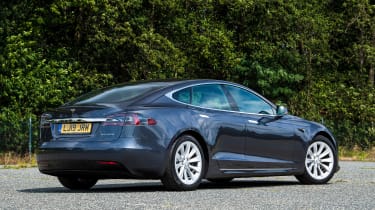 It’s a shame that the latest front-end styling has rather detracted from the visual appeal of the Model S, but the car has been kept at the cutting edge of technology. This is clear to see when you get inside – a huge 17-inch display, portrait-orientated like a tablet computer, dominates the dashboard and controls much of the car’s standard equipment, including its ‘autopilot’ semi-autonomous driving mode. This won the Best Autonomous Drive category at our 2016 Car Tech awards, with the judging panel remarking it was “streets ahead” of similar systems.

The rest of the Tesla’s interior is plush and well appointed, although not to a standard that takes it beyond its luxury competition, which includes the BMW 7 Series, Mercedes S-Class, Audi A8 and Jaguar XJ. Against all these, the unique design of the Tesla puts it at an advantage for interior space.

Reliability has been impressive, too – the Tesla Model S was number one in our 2016 Driver Power owner satisfaction survey and came fifth out of 150 cars for reliability, but too few owners responded for it to appear in our 2020 survey. Safety isn’t a concern either – the Model S was awarded the full five stars after crash-testing by independent experts at Euro NCAP in 2014.

As zero-emission luxury transport solutions go, the Model S is a practical, enjoyable and reliable choice – if you can afford it. It's biggest rival arguably comes from within, because the newer and cheaper Tesla Model 3 will offer many owners a similar experience for far less money. 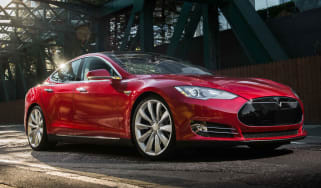 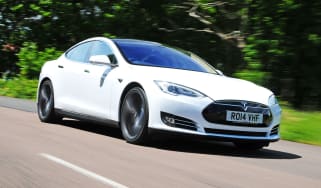 We have a world exclusive on the Tesla Model 3, an electric-powered rival to the BMW 3 Series
Skip to ContentSkip to Footer