The BMW X3 uses modern petrol and diesel engines shared with other models in the BMW line-up, while the xDrive30e is a plug-in hybrid. Fuel economy figures are broadly comparable to premium rivals. An all-electric iX3 is also in the pipeline, and the plug-in hybrid model has impressively low running costs, especially compared with the more powerful X3s.

The third-generation X3 models are powered by conventional petrol and diesel engines, or a mixture of petrol and electric in the plug-in hybrid xDrive30e. The smallest diesel is the 20d, a 2.0-litre, 187bhp engine now fitted with mild-hybrid technology that returns up to 47.9mpg, measured using WLTP test methods that more accurately reflect real-world driving. Claimed CO2 emissions are 154-168g/km, placing it towards the top of the Benefit-in-Kind (BiK) bandings for business-car users, depending on trim level and specification.

A bigger 3.0-litre 30d diesel is also offered with mild-hybrid assistance, upping power to 282bhp but reducing economy to a best of 45.6mpg and increasing CO2 emissions to 161-181g/km. This puts it in the top BiK bracket, which is the same banding as the 3.0-litre diesel Jaguar F-Pace occupies. The most potent diesel, the M40d, has 335bhp and returns around 40mpg with CO2 emissions of up to 184g/km. 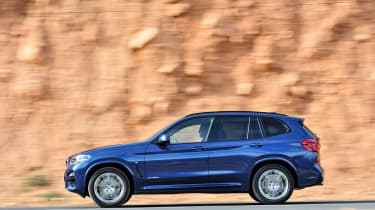 The entry-level petrol model is the 20i SE and it’ll return around 35mpg with CO2 emissions of 176-187g/km, which also makes it expensive for company-car drivers. The performance flagship is the M40i, whose 355bhp 3.0-litre petrol returns 30mpg – a far lower figure than the diesels, but perhaps unsurprising for an SUV that can do 0-62mph in less than five seconds. CO2 emissions of at 204-215g/km make the M40i an intimidating prospect for business car users, though.

Those business users should prefer the innovative BMW X3 xDrive30e plug-in hybrid. Thanks to its battery pack (that can be charged at home or using a public fast-charger), it can travel for up to 31 miles on electric power alone. This helps it achieve efficiency figures of 128.4-141.2mpg and 44-49g/km of CO2, although fuel economy will vary wildly depending on how often you charge the batteries and your driving style. Crucially, the CO2 figure is low enough to slash BiK liability and grant exemption from the London Congestion Charge and other low emission zones.

Insurance classifications follow the pattern set by the previous model. The X3 starts in group 28 for the petrol xDrive20i, 29 for the 2.0-litre diesel xDrive20d, rising to 40 for the 3.0-litre diesel. Despite its extra performance, the M40i sits in the same group 40, but the diesel M40d is five groups higher. In comparison, the similarly powerful Audi SQ5 is listed in insurance group 42. 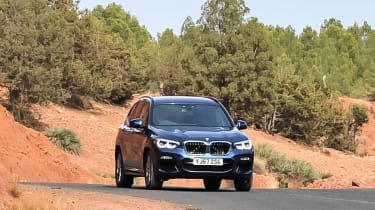 On-board indicators are used to determine BMW service schedules, so maintenance is only suggested when necessary. However, this doesn't necessarily mean low running costs, and BMW servicing does tend to be on the steep side. To reduce the risk of unexpected bills, BMW offers service plan packages – starting at £399 for three-years or 36,000 miles – that help you to spread the cost of maintenance over a number of service appointments.

All BMW cars sold in the UK are supplied with an unremarkable three-year/unlimited-mileage warranty that matches that offered by Mercedes but trumps Audi's warranty, which is limited to 60,000 miles in the third year.