New Audi A4 vs 3 Series, C-Class, XE and Giulia

How do these five compact executive saloons stack up against each other? 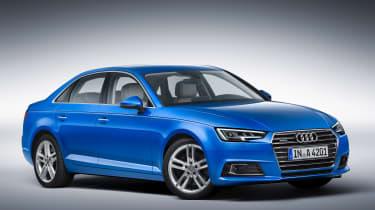 The unveiling of the new Audi A4 means we now have a very good idea of how the compact executive car class will look for the next few years.

Along with the new A4, competition for sales will largely be between the recently updated BMW 3 Series, the Mercedes C-Class, the new Jaguar XE and the impressive new Alfa Romeo Giulia.

Designers and engineers have to achieve a tricky feat of alchemy to create a best-selling compact executive saloon, as the varied customer base values style, efficiency, performance and luxury in almost equal measure. We’ve taken a look at how the cars compare to see which of the main contenders is primed to win a very tough battle.

The new Audi A4 is an exercise in conservative design evolution rather than a dramatic revamp. This approach is in keeping with the latest rivals from BMW and Mercedes, who have sharpened up the latest 3 Series and C-Class respectively without totally overhauling the cars’ very recognisable looks.

The Jaguar XE and Alfa Romeo Giulia are the new kids on the block, and while both look striking thanks in part to their unfamiliarity, they’re certainly two of the more eye-catching models out there. We’ve only seen the Giulia in sporty QV form thus far, but the Alfa certainly looks like being the biggest head-turner in the class. Its racy Italian heritage also offers buyers an alternative to the fairly similar brand identities of the German manufacturers.

Yet while the new A4 is likely to be larger than its rivals, weight saving of up to 120kg compared to the outgoing model means it should be at least on par with the majority of them when it comes to tipping the scales.

While we don’t have official dimensions for the new Alfa Romeo Giulia, it’s likely to be of similar size to the Jaguar XE thanks to its compact design. We also expect the Giulia to be the lightest car in the class when it hits the road.

The new Audi A4 is available with four diesel and three petrol engines. The entry-level model will use a 148bhp 1.4-litre turbocharged petrol that’ll get the car from 0-62mph in 8.9 seconds. BMW’s 316i ES is slightly faster from 0-62mph, at 8.6 seconds.

The entry-level XE and C-Class petrols are quicker than the A4 and 3 Series models mentioned, but they’re also significantly more powerful and more expensive.

At the other end of the spectrum are the sporty versions of the cars. The BMW M3 has a 424bhp 4.0-litre twin-turbo petrol, the range-topping Jaguar XE has a 335bhp 3.0-litre supercharged V6 and the twin-turbo 4.0-litre V8 in the Mercedes-AMG C63 S produces 503bhp.

Audi hasn’t announced details of a new S4 or an even more extreme RS4 model of the A4 yet, so for now the quickest model in the new A4 range will be a 272bhp 3.0-litre turbocharged diesel.

The Mercedes is currently the quickest of these performance-orientated saloons, but it’ll be usurped by the Alfa Romeo Giulia QV. The fastest version of the Alfa has a Ferrari-engineered 503bhp 3.0-litre V6 twin-turbo petrol engine that’ll get the car from 0-62mph in just 3.9 seconds.

Aside from the car’s straight-line speed, it’s also been engineered to be lightweight. This plus its rear-wheel-drive setup and 50:50 weight distribution mean it threatens to be the most fun, as well as the quickest, car to drive in this class.

Company-car users and fleet buyers are an important consideration for the makers of cars in the compact-executive class, so efficiency is a particularly high priority.

The new Audi A4 is very promising in this respect, as it’ll be available with a 148bhp 2.0-litre TDI diesel engine that’ll return 74.3mpg and have CO2 emissions of just 95 grams per kilometre for tax-free motoring.

The BMW 320d and the 161bhp 2.0-litre diesel Jaguar XE are both capable of the same fuel-economy figure and have CO2 emissions of 99g/km, so they both cost nothing to tax, too.

The Mercedes C200 BlueTEC SE lags slightly behind, with figures of 72.4mpg and CO2 emissions of 101g/km. Alfa is yet to announce the full engine range for the new Giulia, but a frugal diesel combined with the car’s low weight should help it compete with the best in class.