How does the 2020 SEAT Leon compare to the Mk8 Volkswagen Golf and our favourite family hatchback, the Skoda Scala? 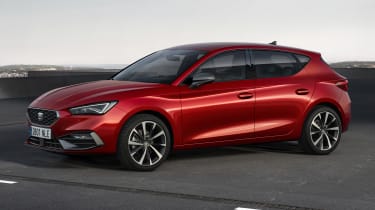 The last SEAT Leon was a real success story for the Spanish brand and the popularity of its sharp, sporty design has influenced the styling of models subsequently added to the SEAT range. The new, fourth-generation model is very important for the company and SEAT can’t afford to rest on its laurels. The changes between the slightly bulbous Mk2 model and the pointy Mk3 model were enormous, but this new Leon has similar engines, styling and trim levels to the car it replaces. Can it move the game on in the same way the last one did?

We think so, and it’s partly because of parts-sharing within the VW Group. The Leon borrows many of its components from the latest Volkswagen Golf, which has a state-of-the-art interior that’s brimming with hi-tech features. The new Mk8 Volkswagen Golf seems to have shifted its position slightly to better compete against the luxurious Mercedes A-Class and BMW 1 Series. As before, the Golf has the more prestigious image and the Leon is the sportier option, but neither of them are budget choices.

For value-for-money, it’s hard to overlook the Skoda Scala. We awarded it our Best Family Car of the Year for 2020 because it’s bigger and more practical than the Golf but has a much lower price. You might be surprised to learn that, despite being a similar size to the Golf, it actually uses the same underpinnings as the Skoda Fabia and Volkswagen Polo. Sure, it’s not quite as plush as either the Leon or the Golf, but the Scala makes up for that with practical touches and all the essentials.

All three of these cars look sharper than the models they replaced but you could argue that the Leon looks most similar to its predecessor. The basic shape looks to be the same, with a kinked window-line and a sloping rear windscreen, but it’s longer and lower. That suits the Leon’s positioning as the Golf’s sportier cousin - especially when you choose the FR model. The front end is smarter, with standard LED headlights (similar to the SEAT Tarraco) sitting either side of a new six-sided grille. At the back, an LED bar connects the two tail-lights, while the rear bumper looks similar to the previous car.

From its side profile, the Golf Mk8 is unmistakably Volkswagen’s iconic hatchback. It has a more upright look than the Leon hatchback, and carries over the shape of the doors from the Mk7 Golf. The wheel arches are better defined and both ends have had a striking redesign to make the car stand out and look a little more aggressive. Like the Leon, the headlights sit lower down the front end, while the brake light clusters and tailgate look like they’ve been taken from the Volkswagen T-Roc SUV.

In this company, the Skoda Scala hatchback is in danger of blending in, but Skoda has given it several nice touches to ensure that doesn’t happen. The near-triangular LED headlights and bonnet creases make the front end look smart, and you could imagine the chrome-lined grille fitted to a more premium car. You can have the top part of the tailgate in black glass instead of paint, and it’s little touches like that (and two-tone alloy wheels) that make the Scala interesting. While we think it does look better in top-spec SE L trim, all models look much more striking than its predecessor, the Skoda Rapid, ever did.

Following the current trend, all three of these cars have moved away from screens plumbed into the dashboard; now, each one sits proudly on top of the centre console, more in the driver’s eye-line, and are available in several sizes. It’s fair to say that none of these interiors offer the design flair of a Peugeot 3008 but the focus seems to be on making the cabin as intuitive - and as tech-filled - as possible.

The latest Volkswagen Golf and SEAT Leon both have a 10-inch infotainment touchscreen and a 10.25-inch digital instrument cluster as standard. Besides the steering wheel and door controls, you’ll find very few physical buttons in the Golf - everything else is controlled by touch-sensitive panels. The Golf’s screens look like they’re one long panel - as they are in the Mercedes A-Class hatchback - while the Leon and Scala both have space between the screen and the dials. 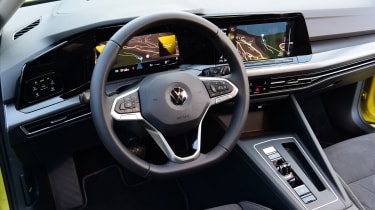 When the car was launched in early 2019, the Skoda Scala had one of the biggest touchscreens of any mainstream family hatchback. The 9.2-inch Amundsen screen fitted to SE L models is bigger than the screen in the Ford Focus and the previous Leon and, although it’s now been overtaken by the new versions of the Golf and Leon, it’s still super crisp and lovely to use. You can tell it’s the least upmarket of the three cars we’re comparing here, but Skoda has hidden the cheaper materials lower down, where you’re less likely to touch them. It also gets physical climate control dials compared to the touch panels in the other cars, and the physical controls tend to be easier to use.

Read the brochures for the 2020 Volkswagen Golf and SEAT Leon and you might think you’ve picked up the brochure for a high-end luxury car instead. Both are absolutely stuffed with the very latest equipment; as an example, the Golf comes as standard with Car2X connectivity. That means the car can communicate with other cars and local infrastructure, to warn you about any local roadworks, traffic jams, broken-down cars and emergency vehicles. 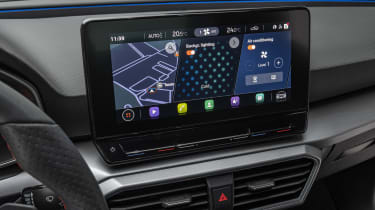 The Golf and Leon come with an eSIM, which enables online connectivity all the time. Both also feature Amazon Alexa voice assistance that links to your home’s smart devices, if you have them. SEAT encourages you to download the accompanying SEAT Connect app, and from here you can access driving data, see where the car’s parked, lock/unlock the car and set up speed alerts, among other things.

You won’t get these features in the Scala - they’ll appear on the newly revealed Skoda Octavia - but it still offers plenty of kit and could well be the sweet spot for many buyers. As well as a digital instrument cluster on top models, the Scala is available with Apple CarPlay and Android Auto, standard LED headlights, pedestrian detection and certain online features.

The new Leon is 86mm longer than before, with a 50mm longer wheelbase (the distance between front and rear wheels). The SEAT Leon ST estate is a 93mm longer than the car it replaces. It seems like SEAT has focused the extra length on improving the already generous rear legroom, as the hatchback’s boot space is unchanged at 380 litres. The Leon Estate has become even more practical, as its 617-litre boot is a 30-litre improvement and is now bigger than the Kia Ceed Sportswagon and the outgoing Skoda Octavia Estate. Headroom in both cars is almost identical to the previous car, despite the new model having a slightly lower roofline. 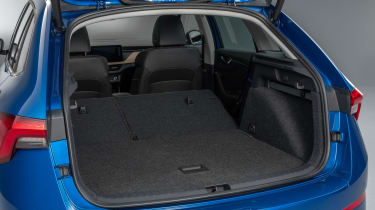 Just like before, the new Golf hatchback offers an identical boot space figure to the Leon. This is marginally better than the Mercedes A-Class and Ford Focus hatchback, but we had expected the longer wheelbase to increase the boot size to over 400 litres. However, it’s worth noting that the mild-hybrid models offer the same amount as the non-hybrid versions; some hybrids have the batteries mounted under the boot floor, which cuts into luggage space.

The Scala shouldn’t technically be a rival for these cars as it uses a smaller platform, but it’s actually much more practical than both the Leon and the Golf. With all seats in place, you’ve got 467 litres to fill - without squashing your rear-seat passengers. Skoda’s hallmark ‘Simply Clever’ touches are present, too, so you get handy features such as a parking ticket holder on the windscreen, a removable torch in the boot and a screenwash reservoir with an in-built funnel for easier pouring.

We’ve no concerns about the safety of the Golf, as it scored a maximum five-star Euro NCAP result. Its long list of safety features, most of which come as standard, mean it should be considerably safer than the previous model, which also scored five stars. Even entry-level models get lane-keeping assistance, bright LED headlights and a pedestrian protection system. 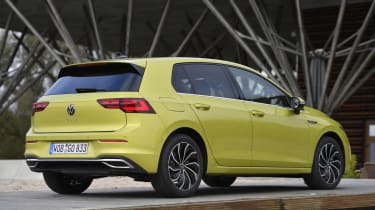 Considering how closely the Golf and Leon are related, it’s very unlikely that the Leon will get anything other than a five-star score. SEAT has confirmed that the 2020 Leon will be available with adaptive cruise control, emergency assistance and traffic sign recognition.

The Scala also gets a reassuring five-star rating, so its lower price doesn’t mean you’ll be skimping on the safety of you and your family. Standard equipment includes autonomous emergency braking, lane-keeping assist and pedestrian detection, while rear cross-traffic alert and adaptive cruise control can be picked from the options list.

As you might expect, the 2020 SEAT Leon and Volkswagen Golf share most of their engines. There’s a choice of four petrols: a new 1.0-litre engine with 113bhp, a 1.5-litre with either 128 or 148bhp and a 2.0-litre with 187bhp. The last three out of those four are carried over from the previous car. The 113bhp and 148bhp petrol engines are available with mild-hybrid technology, which allows the stop-start to cut in earlier and the engine to shut down when you’re coasting. A 2.0-litre TDI diesel is offered with either 113bhp or 148bhp, while the Golf also comes with the option of an 89bhp version of the 1.0-litre petrol engine. 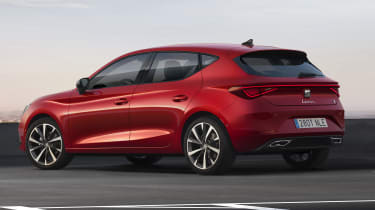 For the first time, the Leon is available as a plug-in hybrid, using a 1.4-litre petrol engine, an electric motor and a 13kWh battery. It produces 201bhp, and the Leon can drive for up to 38 miles on electric power. The Golf will get a mechanically identical plug-in hybrid, plus a 242bhp Golf GTE model that’s more performance-orientated.

The Scala shares some of its engines with the Leon and Golf, but also borrows some of them from the smaller Volkswagen Polo hatchback. The 113bhp 1.0-litre and 148bhp 1.5-litre engines mentioned above are available, and there’s a 94bhp version of the 1.0-litre too. Just the one diesel is offered: a 1.6-litre engine with 113bhp.

Given the popularity of the outgoing model, the new SEAT Leon was unlikely to have drastically different styling. It looks leaner and more modern, while the interior is a real step up in terms of technology. The engine range gives plenty of choice to buyers, whether your main priority is economy, performance or a mix of both. All in all, we think it’ll build on the success of its predecessor and may continue to steal sales from the Golf, Focus, Mazda3 and Honda Civic. 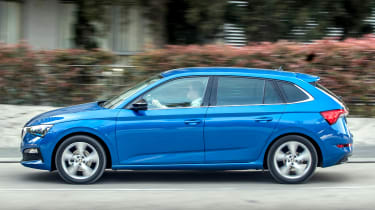 Time will tell whether VW’s decision to push the latest Golf upmarket will pay off, although one would expect that it’ll remain one of the UK’s best-selling hatchbacks. The Volkswagen badge will swing many buyers, and its tech-laden interior could tempt customers who are also looking at a Mercedes or BMW.

On the face of it, the Skoda Scala looks like it’s lagging behind the Leon and Golf but in two very important respects, it comes out on top. Not only is the Scala much less expensive to buy, it’s also more practical, and you’re hardly getting a poorly equipped car. The Scala remains our favourite family car due to the value it offers, but the Golf and Leon are still mightily impressive.

Read more about the new SEAT Leon, or see where the old one places on our list of best used cars.