While BMW offers a three-year/unlimited-mileage warranty on its cars, the Audi A3 Sportback offers just 60,000 miles cover over the same period

The Audi A3 is priced higher than a SEAT Leon, Volkswagen Golf or a Skoda Octavia - all cars it shares parts with - but the list of standard equipment fitted is long and the feeling of quality is undeniable. Furthermore, there is always a ready market for used A3s, and the Audi retains a relatively good percentage of its initial purchase price over the first three years. 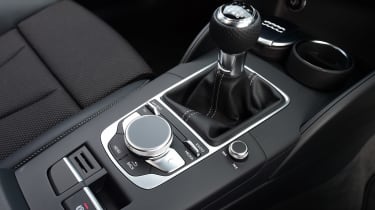 The plug-in hybrid Audi A3 e-tron claims official economy of 141.2mpg and CO2 emissions of just 46g/km but it's very difficult to come anywhere close to its mpg figure in real-world driving. It has the lowest possible Benefit-in-Kind (BiK) rating for company-car drivers but, unless you have plenty of opportunities to plug the car in and charge the batteries, the car effectively becomes a normal petrol A3, and an expensive one at that. If regular charging won't be possible given how you'll use the car, a diesel A3 may prove cheaper overall. It can be driven solely on electricity for up to 29 miles, during which it is electronically limited to 81mph.

The economy champion of the A3 range, if we set aside the e-tron, is the 148bhp 2.0-litre 35 TDI diesel engine. It’s one of our favourite engines in the line-up, offering claimed fuel economy of 56.5mpg and CO2 emissions of 131g/km while being capable of hitting 0-62mph in 8.6 seconds. Due to the extra 4% tax on diesel, business users will pay a little more in Benefit-in-Kind (BiK) than the 148bhp petrol.

If you’re looking to keep the price as low as possible, a 114bhp 1.6-litre 30 TDI diesel is also available, offering fuel consumption of 54.3mpg and CO2 emissions of between 138-143g/km. Surprisingly, this engine sits in a higher BiK band than the more powerful diesel, which is the diesel engine we’d recommend.

The petrol-engined A3s are also remarkably frugal. Drivers covering lower yearly mileages would have no regrets if they chose the 148bhp 1.5-litre 35 TFSI. Its clever cylinder-deactivation system, which shuts down parts of the engine when full power isn’t required, helps it to return 44.8mpg and emit 142g/km of CO2. The resulting BiK band makes it less costly for company-car tax than the diesels. The 114bhp 1.0-litre three-cylinder 30 TFSI engine is even more economical, returning up to 49.6mpg and emissions that enable the lowest BiK rating in the range, besides the e-tron hybrid. You might miss the 1.5-litre engine’s power, though.

All A3s cost £145 a year to tax except for the e-tron model, which costs £135. Choosing the top-spec models with options can see the price creep over the £40,000 threshold, adding £320 onto your annual tax bill until the car is six years old.

The lowest insurance rating of any Audi A3 is group 19; the BMW 1 Series and Volkswagen Golf both start in lower groups. Audi insurance premiums are brought down, though, by the wealth of electronic safety systems on board. Depending on the engine and trim level, the A3 occupies groups 19-32.

The three-year/60,000-mile Audi warranty is reasonable, but not very remarkable in this class. Yet it can be extended to four years or 75,000 miles or to five years and 90,000 miles for extra cost. It's not exactly in the same price bracket as the A3, but the Kia Ceed family hatchback has an unbeatable seven-year/100,000-mile warranty.

The good news about the Audi is that it’s got a pretty solid reputation for reliability, so even though there are longer warranties out there, chances are that you won’t miss them.

There’s a separate warranty in place on the A3 e-tron models to cover the battery against failure for eight years or 100,000 miles. Audi does say that a 10%-30% reduction in battery capacity during the warranty period is classed as normal degradation and will not qualify for a replacement battery.

The Audi A3 has two different service schedules, depending on how, and how far, the car is driven. Low-mileage drivers who typically cover short journeys can choose a fixed schedule of every 12 months. Drivers who cover more than 10,000 miles a year are placed on a variable schedule, meaning service intervals could be up to two years apart. The Audi A3 e-tron models can only be sold or maintained by 34 specific Audi Specialist centres in the UK – it’s worth checking for your nearest centre before you decide to buy.

Audi offers a number of options to spread the cost of servicing, each lasting until your car’s third birthday. The Audi Complete plan has three levels. The cheapest is service-only, which covers all services for the first three years. The service and maintenance plan adds cover for engine, suspension, gearbox and brake components, as well as three years’ of breakdown cover. The final level of cover (service, maintenance and tyres) also includes replacement tyres and related alignment and puncture repairs.