The mid-sized SUV market is one of the UK's fastest-growing, with buyers flocking to benefit from modern styling and family-friendly practicality. But which is best?

Buyers’ desire for versatile and affordable family cars has driven a great deal of change in the car industry, and the mid-size SUV is arguably the end result. The wave of SUV-inspired crossover vehicles that accounts for so many new-car sales today was spearheaded by the still popular Nissan Qashqai, which proved that a sturdy and practical yet compact vehicle was just what families were looking for.

Although there were medium-sized SUVs long before the Qashqai appeared, including the Mitsubishi Shogun and Vauxhall Frontera, very few of them were as versatile and easy to live with. Many were merely shrunken versions of larger off-roaders and somewhat over-engineered for family life, while others - like those listed above - were simply too agricultural to be truly enjoyable. The first Qashqai, on the other hand, was a model that offered all the everyday versatility of an SUV but the running costs and road manners of a small hatchback. 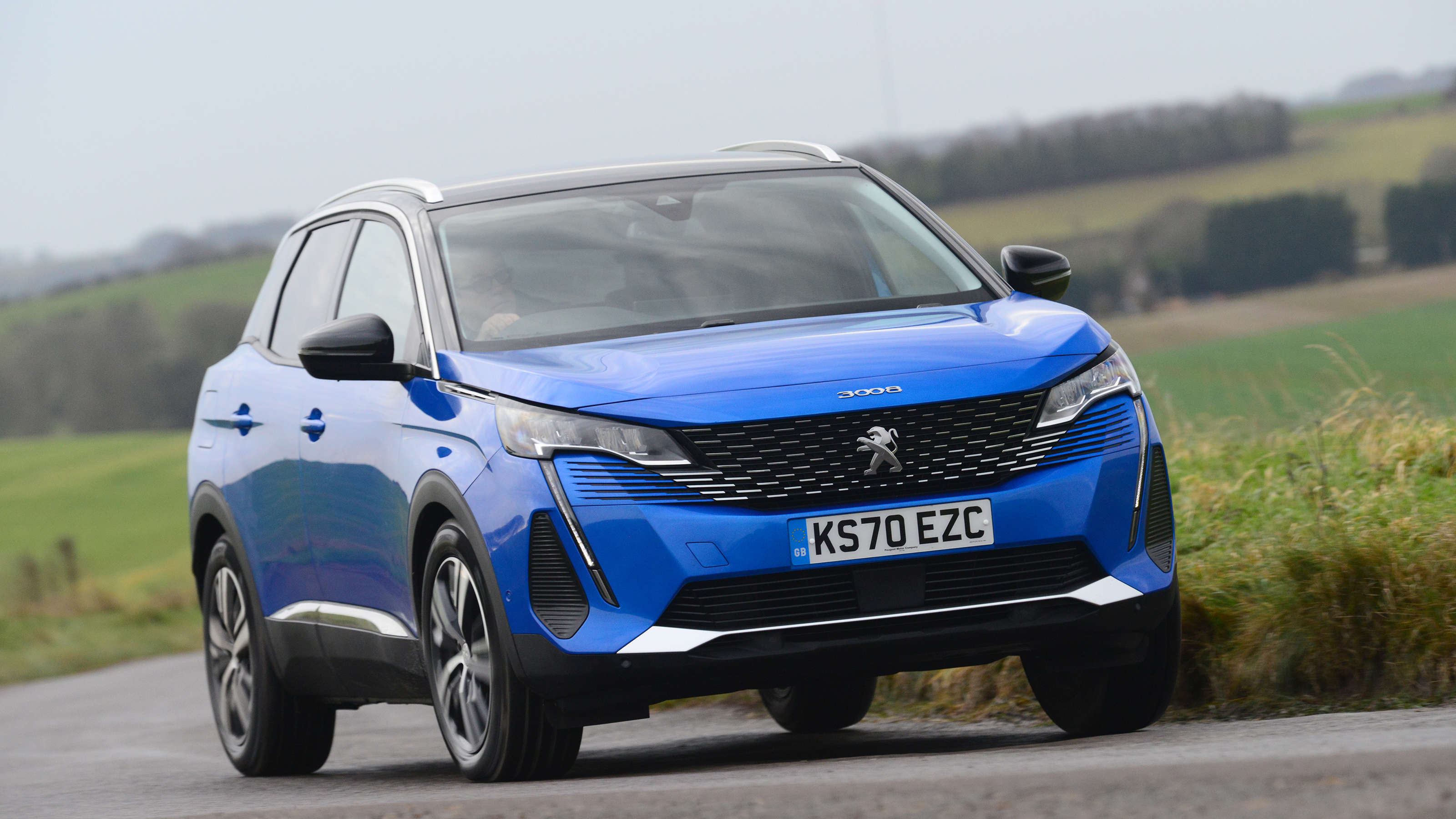 Medium size SUVs including the Hyundai Tucson and Peugeot 3008 have become a force to be reckoned with; many UK buyers now choose this kind of car over a conventional family hatchback or estate, cars that don’t offer the raised driving position, extensive luggage compartment and adventurous image. It seems that every month another carmaker gets in on the act with an offering of its own, so this class has never been so competitive.

If you’re looking for something not quite as big as those listed below, there are plenty of smaller models to choose from. We’ve looked at every single SUV on the market, regardless of its size, to figure out which are the best you can buy, so there really is an SUV or crossover to suit every lifestyle.

Read on for our shortlist of the 10 best medium SUVs you can buy today.

We named the Hyundai Tucson our Car of the Year, Best Hybrid and Best Family Car as part of the 2022 Carbuyer Best Car Awards, so you could say we rate it rather highly. Hyundai has shown it can push the boundaries even in this ultra-competitive class.

No matter if you make short trips around a city, commute, or fly up and down the motorway, there's a petrol, diesel or hybrid engine to suit your needs. Even a plug-in hybrid is available, so you can plug in at home, work or a public charger for zero-emissions miles. This not only saves fuel but also slashes Benefit-in-Kind costs for company-car drivers.

The Tucson is fun to drive, boasts a plush interior and has plenty of back seat space and luggage room for a family of five. All of this comes backed up by Hyundai's five-year warranty… not that you're likely to need it.

The Peugeot 3008 is an incredibly capable all-rounder. It's been given a very mature, sophisticated look on the outside, but it's the interior that really impresses with its sleek, space-age dashboard. Peugeot's clever i-Cockpit instrument cluster replaces traditional dials with a hi-res screen you can customise like Audi's Virtual Cockpit, and its other displays and buttons exude concept-car cool.

Elsewhere, high-quality fabrics have been used throughout to upmarket and elegant effect and there’s plenty of space for five and their luggage. Couple that with a range of superb engines, including a 1.5-litre diesel that can achieve up to 60mpg and a range-topping Hybrid4 model capable of over 230mpg, a comfortable ride and plenty of equipment, and you have one of our favourite mid-sized SUVs.

The Skoda Karoq shares its underpinnings with the SEAT Ateca and has many of the same great qualities as a result. The Karoq trumps the Ateca in some respects too, thanks to elements such as its VarioFlex rear seats that slide independent of each other, making the car more versatile inside. The Karoq has a slightly softer suspension setup than the Ateca, which results in excellent ride quality – something that may be of more importance to buyers, particularly those with families, than handling.

The Karoq has one of the biggest boots in the class, measuring at more than 500 litres without VarioFlex fitted, beating those in the Volkswagen Tiguan and Peugeot 3008, and you’re very likely to find an engine suited to how you’ll use the car because of the large and impressive selection of VW group engines offered.

You could be forgiven for thinking SEAT has been building SUVs for years, such is the excellence of the Ateca, the Spanish brand’s first foray into this class. With handsome styling, a practical interior and a surprisingly low list price, the Ateca is great value for money. It offers a wide range of engines and the option of four-wheel drive, although choosing that does have a negative impact on boot space.

Since the Ateca is a SEAT, you’d assume it ought to be good to drive – and it is! We reckon it offers more driver appeal than the Volkswagen Tiguan, but the ride is firmer than some of the other models on this list. The 1.5-litre petrol engine is capable of returning an almost identical fuel consumption figure to the smallest 1.0-litre unit at 47mpg but if you’re planning on travelling on the motorway regularly, then we’d opt for the 2.0-litre diesel, which can return around 52mpg.

Volkswagen has styled its Tiguan medium-sized SUV in the same sharp, unmistakable vein as the rest of its range, and there’s no doubting it’s more visually striking than ever before. This helps to increase the car’s appeal – now more relevant than ever as the Tiguan is effectively a more expensive version of the SEAT Ateca that we rate so highly. Like the Ateca, it’s available with a wide range of engines and specification levels, plus you can choose a four-wheel-drive version if you’re looking for extra winter grip.

As we’ve come to expect from Volkswagen, the Tiguan has a well-finished interior with an upmarket feel and its cabin is quiet and comfortable on the move. There’s a big boot, which is 615 litres with the rear seats pushed forwards, and plenty of space and legroom for passengers too. But ultimately, apart from a smoother ride, it doesn’t offer much over the cheaper SEAT Ateca, so the Spanish car is our preferred choice.

The Kia Sportage underwent a radical redesign in 2021, introducing new bold exterior styling making the old car look tame by comparison. On the inside, the Sportage is equally revolutionary, thanks to plenty of tech borrowed from the futuristic EV6. The dual 12.3-inch screens found in ‘3’ trim cars and above are a particular highlight, while lower-spec cars still benefit from plenty of standard kit such as LED headlights, a DAB radio and a reversing camera. Thanks to its boxy shape, the Kia Sportage is spacious too; its high roofline means adults can sit in the back comfortably and the 587-litre boot should easily swallow all your family’s luggage.

The new Sportage shares many of its parts with the latest Hyundai Tucson. Though the ride may be slightly firm, there is a wide range of petrol and diesel engines to choose from which all vary in levels of electrification. Plug-in hybrid models can manage over 30 miles of range using electric power, while cars with the 1.6-litre mild-hybrid petrol engine can return respectable fuel economy of around 44mpg.

The latest Ford Kuga maintains the brand's reputation for sharp handling. For this generation, the Kuga also gains smooth styling, with less of the jutting creases from before. There's a move upmarket inside, where top versions get a high-definition 12.3-inch instrument display and eight-inch touchscreen.

The 1.5-litre EcoBoost engine is the only regular petrol available It produces 148bhp and can return around 42mpg. A plug-in hybrid model is also available, with a 35-mile EV range equating to an official economy figure of over 200mpg. More importantly, this will also be a prime candidate for business drivers thanks to its low BiK band. Ford discontinued the diesel versions of the Kuga in late 2021. When it was on sale, the 2.0-litre EcoBlue engine was available in 118bhp, 148bhp and 187bhp versions, with the most economical managing around 60mpg.

The Honda CR-V is now sold exclusively with a hybrid powertrain instead of diesel and petrol options. The hybrid system consists of a 2.0-litre petrol engine linked to a pair of electric motors, producing 181bhp. It’s sprightly, with the 0-62mph sprint taking just 8.8 seconds. When power is sent to the two front wheels, you can expect an average fuel consumption of 42mpg, which falls to around 39mpg if you opt for four-wheel drive.

Honda has improved the CR-V's steering and made the suspension more compliant, while the interior has an upmarket feel and a decent infotainment system. For the first time, the CR-V is also available with seven seats, although, as with most seven-seat SUVs, the third row is really only comfortable for children.

The Mazda CX-5 has been one of the best SUVs to drive since its launch. Mazda cites its MX-5 sports car as inspiration, and as far-fetched as this sounds, the steering, suspension and gearbox all feel pin-sharp. The most economical engine is a 148bhp 2.2-litre diesel when linked to a manual gearbox and front-wheel drive, returning up to 50mpg.

A subtle facelift has tweaked its appearance to stave off the ageing process and the infotainment system has been updated. As well as being fun for the driver, the CX-5 is practical thanks to its large boot and spacious rear seats. Mazda has a good reputation for reliability, too, so it’s unlikely a CX-5 would cause you any problems in that regard.

The Toyota RAV4 is a hybrid-only SUV that should appeal to company-car drivers and family buyers alike. The 2.5-litre petrol engine and electric motor combination provides 215bhp in the front-wheel drive version or 219bhp when power is sent to all four wheels, making the RAV4 quick for an SUV. It can manage up to 50mpg in front-wheel drive and emits CO2 emissions of 126g/km. The plug-in hybrid, meanwhile, can be driven for up to 46 miles on zero emissions.

These are impressive figures for an SUV and its interior is pleasing too, featuring a mix of robust materials and quality finishes that should survive the rigours of family life. The RAV4's 580-litre boot helps make this a very practical car, even if it does shrink slightly to 520 litres in the PHEV model.

Check out our guides to the Top 10 best large SUVs and MPVs.