C5 Aircross running costs are in touch with the competition 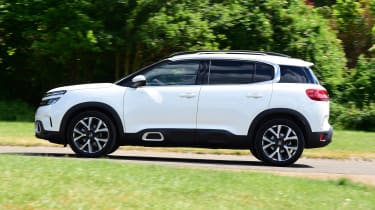 The C5 Aircross was launched with conventional petrol and diesel engines, but a plug-in hybrid version has also joined the range. Running costs should be little higher than for a similarly sized family saloon or estate car.

The C5 Aircross offers a choice of petrol and diesel engines that will seem familiar if you've ever glanced at a Peugeot 3008 brochure. The most efficient is the 128bhp BlueHDi diesel, which Citroen claims can achieve up to 56.3mpg with a six-speed manual or eight-speed automatic gearbox. Its CO2 emissions are lowest in the range at 137g/km, which gives it a mid-level Benefit-in-Kind (BiK) tax rating for company-car users.

It's interesting to note that every C5 Aircross delivers its best economy when the largest 19-inch wheels are fitted – the 17 and 18-inch offerings cause fuel consumption to drop by one mpg or so. Choosing the mud and snow tyres will cost you another few mpg for the benefit of increased grip in poor weather. 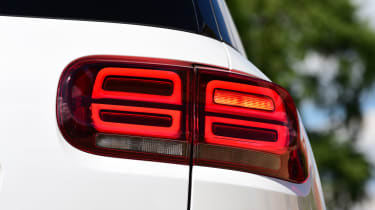 The BlueHDi 180 offers markedly more performance but returns considerably lower economy, with 47.1mpg claimed on 19-inch tyres and 166g/km CO2 emissions placing it towards the top of the BiK tax bands.

Private buyers and those who expect to cover fewer than around 12,000 miles per year will find the PureTech petrol engines appealing, and they're impressively economical in their own right. The less powerful 130 version is claimed to return 44.2mpg, with 149g/km CO2 emissions when equipped with a six-speed manual gearbox. The PureTech 180 – which is no longer offered in the UK – is capable of returning up to 39.6mpg with emissions of 168g/km.

The plug-in hybrid version of the C5 Aircross combines a 1.6-litre petrol engine and an electric motor to produce 222bhp. It’s capable of up to 34 miles of pure electric running from its 13.2kWh battery pack, with claimed fuel economy of between 157.2-222.3mpg and CO2 emissions of 32-41g/km depending on its exact trim level. The 13.2kWh battery pack takes around two hours to charge from a 7kW home wallbox.

The Association of British Insurers (ABI), the body charged with assessing insurance risks, has yet to announce its ratings for the C5 Aircross. It's likely to run the Peugeot 3008 close for insurance costs, though – the 3008 ranges from insurance group 16 for the BlueTech 130 diesel to 24 for the PureTech 180 petrol in range-topping GT-Line trim.

Citroen service intervals can vary depending on the model, with diesel engines often running further between oil changes. You can expect an annual service to be required and Citroen can set up a service contract to cover multiple services in advance, which makes it easier to budget for routine maintenance.

Citroen's warranty covers you for three years or 60,000 miles, whichever occurs first. That's on par with the policy provided by Ford, for example, but lags a long way behind Hyundai's five year/unlimited mileage warranty and Kia's seven year/100,000-mile offering.

When your Citroen warranty expires, you can purchase an extended warranty for an additional 12 or 24 months, subject to exclusions.