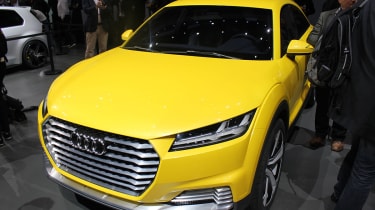 The 2014 Beijing Motor Show started on Saturday with the highly-anticipated Volkswagen Group preview evening. The German company used the exclusive event to show off a raft of new models, including the facelifted VW Touareg SUV, a more rugged Audi TT offroad concept and the super-quick VW Golf R 400 – a bonkers hot hatchback with almost 400bhp.

The rest of the show kicked off today, and features some of the world's most exciting new cars, from small hatchbacks to expensive SUVs. Manufacturers are using the event to show off future models before they go on sale in the next couple of years.

The Beijing Motor Show 2014 saw debuts for the new Lexus NX SUV and an interesting new Mercedes crossover model. Later today, we're expecting a new five-door Honda CR-Z coupe as well as a selection of Chinese-only models, such as the Citroen DS 5LS R. Of course, we'll keep you up-to-date with everything as and when it happens.

So keep reading for our guide to the 2014 Beijing Motor Show.

The Audi TT offroad concept has been revealed in Beijing. The concept is thought to preview the new Audi Q4 – a sporty SUV that will compete with cars such as the Range Rover Evoque and MINI Paceman. The Audi gets the firm’s new-look grille, which will first feature on the new Audi TT that goes on sale in the UK later this year. The TT offroad concept gets four seats, rather than five, to reinforce its sporty image and has many of its controls on the steering wheel for a less cluttered dashboard. The concept car also features a 402bhp plug-in hybrid engine for fast acceleration and low running costs.

The Chinese market’s love of big saloons means Beijing is the perfect place to test the water with a new luxury saloon, and BMW has done just that with (what is rumoured to be called) the BMW 9 Series. Although the super-luxurious saloon car is just a concept for now, we can expect much of the technology on display to feature in future BMWs from the humble BMW 1 Series, right to the range-topping BMW X7 models.

The Citroën DS 5LS R is a compact performance saloon that is specific to the Chinese market. It gets a 1.6-litre turbocharged engine, which should mean it can get from 0-60mph in less than six seconds and has a top speed in excess of 150mph.

The Citroen Citroën DS SUV is the production-ready version of the Citroen Wild Rubis concept, which was unveiled at the Shanghai Motor Show. The car is expected to go on sale in China later this year and will be badged as the Citroen DS X7, fitting in the range alongside the Citroen DS4 and Citroen DS5. The car will compete with models such as the BMW X3 and Audi Q5.

Honda is expected to reveal a five-door version of the Honda CR-Z at the Beijing Motor Show. Little is known about the car, which is thought to be a Chinese-market-specific model, but its set to carry over the styling of the current CR-Z, will be fun to drive, and could get the same petrol-electric engine that features in the European model.

The Hyundai ix25 might not draw the crowds like some of Beijing’s biggest launches, but the budget hatchback is set to be an important model for Hyundai. The car is based on the Hyundai i20 and is billed as a Chinese-market-specific high-volume budget model, which is unlikely to go one sale in the UK.

The Infiniti Q50 Eau Rouge has been doing the rounds at numerous motor shows and this time its stand is set to feature video footage of four-time F1 World Champion, and Infiniti’s ‘director of performance’, Sebastian Vettel, putting the saloon through its paces on track. We now know the car is powered by the same engine that’s fitted to the ultra quick Nissan GT-R and has four-wheel drive, so in theory it should be lots of fun to drive!

The Lexus NX is another making its debut in Beijing. Like Audi’s Q4 concept, the Lexus will rival cars such as the Range Rover Evoque, BMW Q3 and Porsche Macan, when it reaches showrooms later this year. It gets Lexus’ distinctive new ‘spindle’ grille and will be available with three engines including a petrol electric hybrid that will offer excellent fuel economy and low emissions figures.

Mercedes has used Beijing to unveil its Mercedes Concept Coupe SUV (rumoured to be called the Mercedes MLC). It will be a rival to the BMW X6 and is supposed to be fun to drive on-road, while also offering some off-road ability. We expect the Mercedes MLC to go on sale in 2015 calling on Mercedes’ excellent range of engines to offer superb economy or supercar-rivalling performance.

Last year MG previewed a concept version of its Nissan Qashqai SUV and this year a production-ready version of the car is set to go on show. It is expected to be on sale in the UK next year, will be offered with a 1.5-litre or 2.0-litre petrol engines, and will cost around £15,000. The model could also get a super-efficient 1.0-litre petrol that will rival Ford’s 1.0-litre EcoBoost engine.

The 2014 MINI Paceman has been revealed at the Beijing Motor Show, albeit with few very slight changes that you'd struggle to pick out with the naked eye. Like the new MINI Countryman unveiled in New York last week, the two-door MINI Paceman gets new headlights and an updated interior design. It'll go on sale later this year, with an expected premium of around £400.

The Peugeot Exalt concept is a large saloon that could well give us a sneak preview of some of the technical aspects of the new Peugeot 508. It gets a premium finish inside and out, and an aerodynamic body shape. The car’s powerful hybrid engine is also capable of returning excellent economy figures, while giving the Exalt impressive performance.

Porsche has used the Beijing Motor Show to put on show range-topping versions of the Boxster and Cayman. Called the Porsche Boxster GTS and Porsche Cayman GTS, the new models both get a 15bhp increase in power (over the Boxster S and Cayman S), a slight increase in performance, and also come fitted as standard with Porsche Active Suspension and the firm’s Sport Chrono pack – for better performance in the corners. Both models get 20-inch alloy wheels and can also be specced with more sporty suspension.

The Volkswagen Golf R may have only just hit the showrooms, but the VW Golf R 400 has already been revealed at the Beijing Motor Show. It gets an even sportier makeover and a tuned engine with nearly 400bhp.

The 2014 Volkswagen Touareg has been revealed at the VW Group preview evening, and although the changes might be hard to spot, the company says it features new suspension and a more upmarket interior.