“An automotive institution, the Volkswagen Golf should be on the shortlist of anyone considering a compact family hatchback”

The Volkswagen Golf is arguably the definitive family hatchback, setting the class standard for over 40 years. Constant evolution and development over seven generations have helped the evergreen Golf stay competitive against a whole host of capable rivals, including the Ford Focus, Vauxhall Astra, and Honda Civic, as well as the increasingly popular Kia Cee'd and Hyundai i30. It also faces competition from other Volkswagen Group brands, namely the SEAT Leon and Skoda Octavia, both of which have many mechanical parts in common with the Golf.

To keep the Golf's act as polished as possible, the car was given a comprehensive makeover in early 2017, gaining the latest infotainment and safety technology, and a styling update. A sophisticated 1.5-litre petrol engine is also available and can be chosen in two power outputs: 129bhp in eco-focused form or a more performance-orientated 148bhp version. 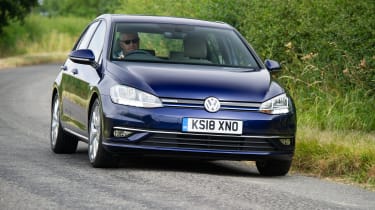 There were further tweaks early in 2019, with VW trimming and removing the SE and SE Navigation models - although they’re still available from dealer stock. VW also introduced the Match Edition, GT Edition and R-Line Edition trims in September of 2019 - they replaced the Match, GT and R-Line trims and added some extra kit. This was done to boost sales as the introduction of the new Golf draws closer.

The Golf has always been a car that provides a driving experience designed to please as many drivers as possible. Like its predecessors, the latest Golf is comfortable on most road surfaces, yet still capable of putting a smile on your face on more challenging roads. The forgiving suspension flatters the worst surfaces, yet resists body lean in corners. There's lots of sound insulation for a quiet, relaxed ride and the engines are smooth and willing.

If you're after a blend of economy and all-round performance, our pick of the range is the 1.5-litre petrol. It can return up to 47.1mpg and emits as little as 111g/km CO2, giving a company-car Benefit-in-Kind (BiK) tax rating of 26%.

The least expensive Golf you can buy uses a 1.0-litre TSI turbocharged petrol engine, producing 83bhp. Even this feels surprisingly nippy, while returning impressive fuel economy. While this engine is a good choice if most of your time in the car is spent in town, it isn't out of its depth on motorways, despite only coming with a five-speed manual gearbox. 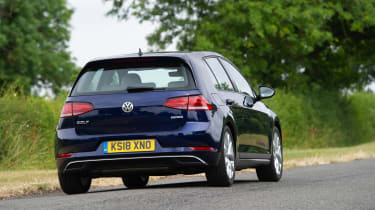 Although the entry-level engine is a sound choice, the lowest-spec S trim level doesn't represent the best value. Despite its bottom-of-the-ladder status, it's actually fairly well equipped, with air-conditioning, an eight-inch colour infotainment touchscreen and DAB radio. However, its price puts it on a par with better-equipped rivals and moving up to a Golf Match Edition reduces this disparity somewhat, particularly as this model was effectively given extra equipment in September of 2019.

The Golf has always offered impressive interior quality and recent models are even better in this regard. Interior materials are first-class and the handsome dashboard is clear and logical, while interior space is reasonable for a car of this size. Also good news – especially for families – is that every model has autonomous emergency braking as standard, helping to mitigate potential collisions.

The Volkswagen Golf finished 41st out of the 75 cars ranked in our 2019 Driver Power owner satisfaction survey of cars currently on sale in the UK and its proven durability helps it to remain a hot property on the used market. Its strong residual values also mean that it can be more cost-effective to finance than certain rivals. All in all, the latest Golf is as compelling a package as it ever has been and can still hold its own in the face of ever-strengthening competition. Our pick of the range is the 1.5-litre TSI with 128bhp in Match trim, thanks to its appealing mix of refinement, low running costs and decent equipment. We'd also favour the five-door Golf, thanks to its added practicality, with the three-door an increasingly rare sight.