BMW 3 Series offers comfort and space for all occupants, and a generous boot

Almost inevitably, the latest BMW 3 Series is a slightly larger car than the one it replaces, although not by a great deal. In fact, it's only 16mm wider and 1mm taller, but it's the 85mm increase in overall length that buyers will most appreciate.

The extra length brings a 41mm increase in wheelbase (the distance between the front and rear axles) and this can be detected in a passenger compartment that's far more accommodating than it was before. 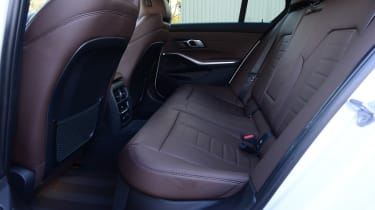 It's in the back that the latest 3 Series' more generous interior space is most noticeable. Rear seat passengers have more room to stretch out than you'll find in a Jaguar XE, for example, and headroom is plentiful for all but the tallest passengers.

A look at the car's dimensions reveals that the front and rear seats are 11mm further apart than in the previous model, and getting in and out should prove easier thanks to a taller door opening. BMW claims that three child seats will fit side-by-side, although only the two outer seats have ISOFIX mounting points.

Up front, there’s a broader range of adjustment for the more deeply contoured sports seats that come as standard on Sport and M Sport models. We certainly had no cause to complain about the comfort of the seats when we drove the 320d in Sport trim. There are also plenty of handy storage compartments for smartphones and other items you might need during a journey. 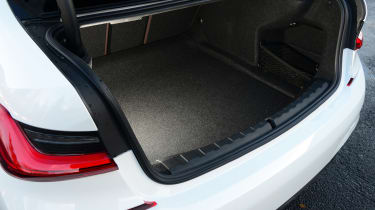 Despite its greater length, the latest 3 Series has a 480-litre boot, which is the same size as the previous model. Helpfully, a split-folding rear seat is now standard, which is divided 40/20/40 into three sections to enable one or two passengers to be carried while transporting extra-long items. The boot shrinks by 105 litres in the 330e plug-in hybrid, which means a boot that’s similar in size to a Volkswagen Golf hatchback.

You can opt for a 'Comfort Access' remote control tailgate, which will automatically unlock when the car's radio key is within range, and will re-lock when it moves away. Handily, the radio key will stop transmitting when a built-in movement sensor detects that it's sitting still – when on a table, for instance – which saves battery power and also makes it less likely for its code to be grabbed by a car thief equipped with a radio code scanner.