How do the new Renault Clio and Peugeot 208 compare to the evergreen Ford Fiesta? We take a look 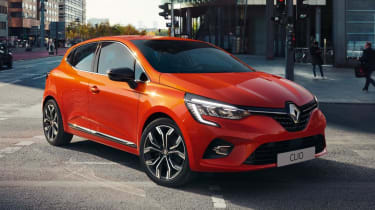 Competition in the supermini market is really hotting up, with the new Renault Clio and Peugeot 208 both pulling out all the stops to take on longstanding class favourite, the Ford Fiesta. The latest Ford Fiesta itself only went on sale in mid-2017 and promptly continued where its predecessor left off by taking on the mantle of the UK’s best-selling new car. It also claimed the Carbuyer Car of the Year crown for 2018 and 2019, but it was the Clio that took top honours in our 2020 awards.

The Fiesta has been a fixture at the top of the sales charts for years and many rival supermini models have tried and failed to dislodge it during that time. The new Peugeot 208 and Renault Clio are the latest newcomers that look as though they’re in with a shout of challenging the status quo and certainly of giving supermini buyers some attractive new alternatives to consider.

To help put you in the picture as far as the strengths and weaknesses of the new Renault Clio and Peugeot 208 compared with the Fiesta, we’ve put together a specs comparison of the three cars. With the supermini market, otherwise known as the B-segment, still accounting for a huge number of sales across Europe, you can expect to see plenty of these cars on the road in the next few years. 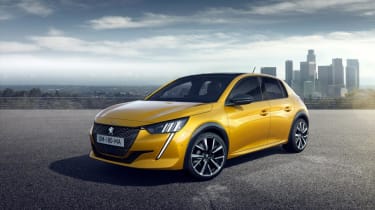 Style plays a big role in any car-buying decision but it’s even more prominent in the small car market where buyers tend to be a little bit younger and manufacturers play up to that with lots of sporty add-ons and personalisation options.

All three of the cars we’re focusing on here embrace that sporty image with sharp lines and bold faces but they also conform to the current design languages employed range-wide by their respective manufacturers. The Ford Fiesta hatchback is now a regular sight on UK roads and that familiarity, combined with a design that’s very much an evolution of the previous model, means that it’s arguably the least striking of these three cars.

Renault’s new fifth-generation Clio updates the latest Renault family face with a large Renault badge and LED headlights featuring a distinctive hook-like motif that curls round below the main units. There’s also the sporty windowline that angles down towards the nose of the car and kinks up at the rear. Like the 208, the Clio is five-door only but the Renault goes to greater lengths to look like a three-door, hiding its rear door handles in the C-pillars.

Of course, the Renault Clio’s interestingly shaped headlights have nothing on those of the Peugeot 208, which come complete with the elongated fang-like light bars first seen on the Peugeot 508 that jut down from the main front light cluster almost to the bottom of the front bumper. The 208 offers a slightly more rounded shape overall with short overhangs and a steeply raked rear window. It’s based on the new PSA Group CMP platform that is also the basis of the new Vauxhall Corsa, and is 30kg lighter than the underpinnings of the old 208. 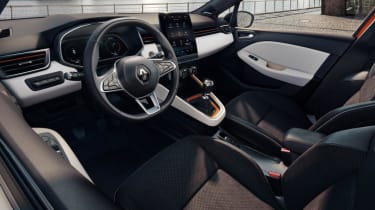 The Renault Clio hatchback is actually 10mm shorter than the old car but Renault claims to have boosted cabin space by trimming millimetres from interior components and fitting them together more efficiently. The boot is bigger than the Fiesta’s and 208’s too, with Renault quoting a capacity of 330 litres to 391 litres depending on the model - the latter of the two numbers is big enough to challenge family hatchbacks from the class above. Both the 208 and Fiesta have 311 litres of boot space, which is still a good size - the last-generation Ford Focus only had five litres more.

There’s a Fiesta for almost everyone, thanks to a huge array of trim levels and models. Trend is the entry-level model, Titanium and Titanium X add extra equipment, ST-Line and ST-Line X have sporty looks and lowered suspension, and Vignale is a luxurious version designed to take on the Audi A1 and MINI. There’s also the SUV-aping Fiesta Active and our favourite hot hatch, the Ford Fiesta ST.

Renault is very proud of the ‘cushioned plastics’ that feature in the Clio’s interior and is making leather trim more widely available throughout the range. There are also more personalisation options than ever before so customers can put their own mark on their cars. The range starts with Play, and ascends through Iconic and S Edition models with RS Line at the top. RS Line is Renault’s equivalent of Ford’s ST-Line but there won’t be a fast Clio RS to take on the Fiesta ST. 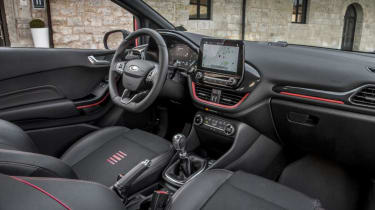 The 208’s cabin follows on from other recent Peugeot interior designs that have impressed in terms of quality and integration of technology. The heavy use of piano black plastics raises the tone and the ‘piano key’ style switchgear on the centre console is also a classy touch. You can choose from Active, Allure and GT Line trim levels, and a GT trim that’s only offered on the electric Peugeot e-208.

When it launched, the Ford Fiesta made significant improvements in terms of the technology it offers compared to the old model but this could be one area where it’s eclipsed by the French newcomers. The Ford now comes as standard with an eight-inch touchscreen that uses the firm’s SYNC 3 software to drive the car’s infotainment systems. It has clear graphics and a simple control interface but the screens on the new Clio and 208 seem to provide more of a wow-factor. 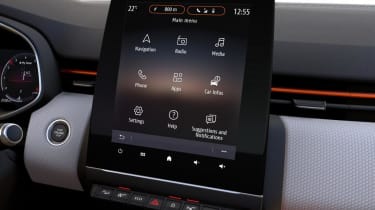 The Renault Clio appropriates the impressive portrait touchscreen from the Megane and upgrades it. The largest screen size in the top spec models is 9.3-inch and it’s curved slightly to angle the information towards the driver. The Clio also ditches analogue dials in favour of a 10-inch digital instrument display that can display navigation information. As in the Fiesta, the car does retain normal rotary controls for the heating and ventilation systems for easy access on the move.

The 208 enters the battle of the supermini screens with an updated version of its excellent i-Cockpit digital instrument display. Called 3D i-Cockpit, it uses reflections to create a three dimensional effect for the information. Mounted centrally, a floating touchscreen display is seven-inch in standard models and 10-inch in top-spec versions.

The Fiesta is extremely strong in terms of safety, as seen by its five-star Euro NCAP score, but the Renault offers far more standard safety kit for extra peace of mind. The Clio also got a full five-star score, while the Peugeot couldn’t quite match its contemporaries, receiving a four-star rating. 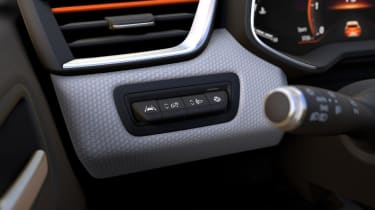 All three cars have lane-keeping assistance as standard, while every Renault also features autonomous emergency braking, pedestrian and cyclist detection, cruise control and emergency assistance. Peugeot goes one step further - speed limit recognition and driver attention warning are added too. These features are offered on higher-spec Clio models, while Ford reserves most safety features for better-equipped versions or the options list.

Diesel was already declining in popularity in the supermini sector and recent legislative hurdles haven’t helped. Despite these issues, and a number of other superminis dropping diesel completely, all three cars here still put at least one diesel engine option on the table - they just build the mainstay of their model lineups around petrol. 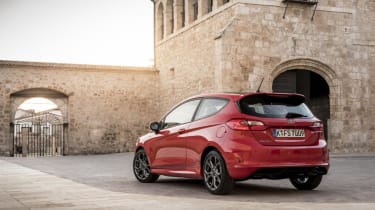 The 1.0-litre EcoBoost petrol engine is the one that the majority of buyers will end up with if they buy a Ford Fiesta. It comes in 94bhp, 123bhp and 138bhp guises, while the 1.5-litre TDCi diesel comes in 84bhp form. There’s also a 1.1-litre 74bhp petrol engine, reserved for the cheapest model.

The new Renault Clio starts with a 75bhp 1.0-litre petrol engine, but most buyers will go for the turbocharged version with 99bhp. A 1.3-litre petrol motor that’s also used in the Mercedes A-Class is available on top trim levels, mated to an automatic gearbox. Renault’s 1.5-litre dCi diesel engine completes the lineup. Peugeot gets similarly powered petrol engines and a 99bhp diesel engine.

While diesel sales are falling, electric cars and hybrids are increasingly stepping into the void. Both of our French newcomers have different visions of how that will play out in the supermini market. 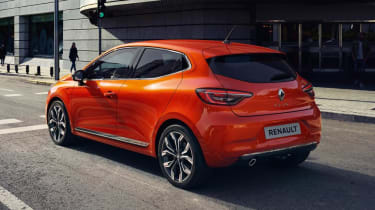 The Clio is to gain hybrid tech with a new system comprising a 1.6-litre petrol engine and two electric motors working at different speeds. Renault isn’t thought to be planning a fully electric version of the Clio; its existing Renault ZOE electric supermini is a similar size.

That’s in contrast to Peugeot, which has the e-208, a pure-electric version of the 208 with a claimed range of 211 miles on a single charge and a 134bhp electric motor. Peugeot has announced a suite of backup services to support its EV customers, ranging from charging solutions and journey planners to a mobility pass that gives access to an internal combustion engined car when needed. 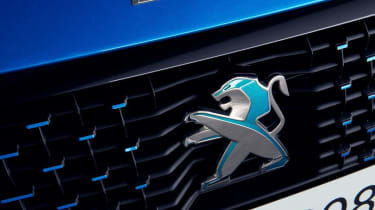 Ford has been less forthcoming about its plans to electrify the Fiesta. While we expect it to happen, a pure electric model is still likely to be years away. We expect mild-hybrid assistance for some engines soon but this will only bring small gains in fuel economy.

The new Peugeot 208 and Renault Clio superminis are both far better than ever before and it means buyers have a great array of choice and a tough decision when choosing between the three.

The Ford Fiesta was our reigning Carbuyer Car of the Year but the Renault Clio won for 2020. Both of the French cars offer compelling design and interior technology packages that should raise the levels of competition in the UK supermini market - that can only be good news for car buyers.

Read our guides to the best first cars and the best car interiors.