How does the new Mk8 Volkswagen Golf compare to the premium hatchback class-leaders? 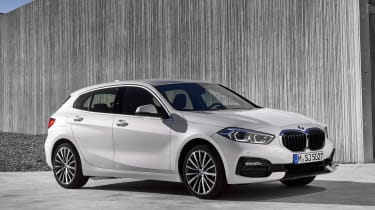 Since its launch in 2018, the Mercedes A-Class has led the premium hatchback class, as its main rivals, the BMW 1 Series and Audi A3, started to feel dated by comparison. The A-Class has been one of the best-selling cars in the UK during 2019, and it’s easy to see why. It has an interior that’s as luxurious as some much more expensive Mercedes models, while impressive engines and improved practicality also help the A-Class’ cause.

The latest Volkswagen Golf was revealed in October 2019 and is set to muscle in on the premium hatchback class. While previous Golfs have rivalled the Ford Focus, Kia Ceed and Renault Megane, VW has pushed its main seller upmarket thanks to a fully digital interior and hybrid powertrains.

The A-Class won’t have it so easy with the introduction of the new Golf and BMW 1 Series. While the new 1 Series’ front-wheel-drive layout might put off some enthusiasts, it’s still likely to be popular with keen drivers - and the switch from rear-wheel drive makes the car lighter and more spacious.

We’ve compared the specs of these three premium hatchbacks based on the latest information we have. 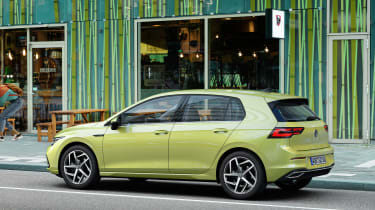 While the image associated with these cars’ badges will be enough to persuade some customers, the A-Class and 1 Series need to have strong styling to stand out. After all, whether you like the design or not will probably decide whether you want to test-drive the car.

These cars are aimed at younger drivers but will appeal to a wide range of buyers, and feature plenty of eye-catching styling touches. The A-Class, Golf and 1 Series all boast design features that have been carried over from other models - the Mercedes CLA boasts the same sharp front end as the A-Class, there’s more than a hint of BMW X2 in the design of the 1 Series and the Golf channels the Volkswagen Passat and Volkswagen T-Roc. Whichever you pick, you can make your car stand out with a catalogue of styling packs and accessories.

Familiarity hasn’t dented the appeal of the A-Class, as its pointed headlamps and wide grille are still striking. While the rear of the car has also been heavily redesigned, it looks similar to the old model from the side, even if it’s bigger and longer to improve space for passengers in the back seats.

The latest Golf is still instantly recognisable but the styling changes are actually quite extensive compared with the previous model. The front end is completely different, with slim LED headlights that join a narrow grille. The nose sits lower than ever before and the Golf is longer and lower than its predecessor.

The 2019 BMW 1 Series has had a more thorough redesign but its new looks have proved divisive. The front includes new, sharper headlights and bigger grilles (which touch for the first time), while the car looks more squat and sporty as a whole. The restyled rear end bears a resemblance to the Audi A1, and you can spec LED lights all round. For the first time, 19-inch wheels are also available. 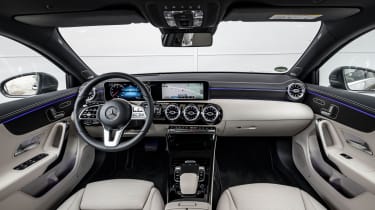 If you’re in the market for a premium hatchback, you’ll expect the Volkswagen Golf, Mercedes A-Class and new BMW 1 Series to be a step above cars like the Honda Civic and Hyundai i30, and all of them are. High-quality materials are used throughout, and the interiors will be big selling points; once you try out these cars, you might be easily persuaded to upgrade.

The Mercedes’ interior is a real treat; it’s our class-leader because it’s just as luxurious as the Mercedes E-Class, which costs about double the price. Two screens dominate the centre console, which measure seven inches each on entry-level models and 10.25 inches on high-spec versions. Build quality is excellent too, although we were slightly disappointed with the comfort and road noise on the largest alloy wheels.

While the BMW’s interior doesn’t immediately catch the eye, it’s filled with similarly plush materials and that all-important upmarket feel. BMW has angled most of the dashboard towards the driver - another indication that this is aimed at driving enthusiasts - and everything’s exactly where you’d expect. The 1 Series is also available with two 10.25-inch screens.

Impressively, the latest Volkswagen Golf comes as standard with a 10-inch infotainment screen and a same-sized Active Info Display, a digital instrument cluster that replaces an analogue speedo and rev counter. The new Golf is online all the time, and the only analogue elements are the steering wheel and the hazard light button - all other buttons have been replaced by touch-sensitive panels. Amazon Alexa voice assistance and Car2X (which communicates with other cars and roadside infrastructure to warn of any hazards) are also offered among a long standard kit list. 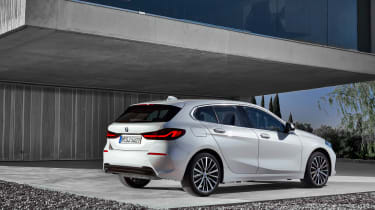 A bugbear of the previous Mercedes A-Class and BMW 1 Series was their cramped back seats, but the fact that both new cars are larger is good news for passenger space. Elbow, knee and headroom have all been improved in the BMW, and it’s noticeably more spacious. Adults will be happier on long journeys than in the previous model. The Mercedes has grown too, but not by as much, and it can still feel a little claustrophobic in the back.

BMW’s switch to front-wheel drive has freed up plenty more boot space, and the 1 Series now offers 380 litres. That should be big enough for most buyers, as it exactly matches the outgoing Golf and SEAT Leon, and just beats the Ford Focus’ 375-litre boot. The Mercedes’ boot is slightly smaller, at 370 litres, but the opening is much more useful than the previous A-Class, and 40:20:40 split-folding rear seats are standard.

The new Golf’s extra length should free up extra space for passengers in the rear seats and we expect the boot should be a little bigger than the 380-litre space in the outgoing model. 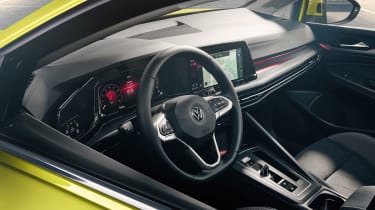 All three companies have fitted their smallest family-orientated models with a dizzying array of technology, some of which you’d only expect to find in luxury saloons and SUVs. As we’ve mentioned, VW offers two 10-inch screens even on the entry-level S trim level, plus keyless start, automatic air conditioning and online services. There are many other technologies available, and Volkswagen has said that you’ll be able to retrofit some of these onto the Golf if you change your mind after you’ve bought it.

Mercedes’ headline infotainment system is super slick, and actually has more processing power than the system in six-figure Mercedes S-Class models. All cars come with the digital instrument cluster and infotainment screen, plus cruise control and keyless start, but a lot of the wow-factor technology costs extra. You can add things like augmented-reality sat nav, which adds directions onto a real-time view of the road ahead, and active parking assistance. However, speccing parking sensors (an essential for many people) costs extra.

Most versions of the 1 Series have sat nav and cruise control, which can stop and restart without you having to do anything, and even set the speed limit based on local restrictions and what’s detected by the traffic sign recognition software. Some of the options you can choose include a head-up display (that projects your speed and sat-nav directions onto the windscreen in front of you), automatic parking, connected navigation and BMW’s new Intelligent Personal Assistant.

It’s too early to say for sure but we expect the new Golf to match the BMW’s and Mercedes’ five-star Euro NCAP safety rating. Both the A-Class and 1 Series come with an impressive amount of standard safety technology, including automatic emergency braking, lane-keeping assistance, and hill-start assistance. Mercedes also includes its driver drowsiness sensors and an active pop-up bonnet to minimise pedestrian injuries, and you can add parking assistance and adaptive LED headlights for an additional cost. BMW, meanwhile, offers collision, pedestrian and cyclist warnings, with cross-traffic monitoring available on the options list. 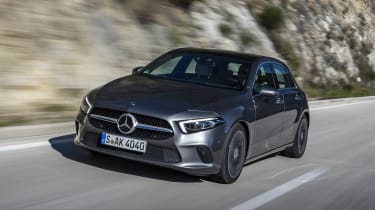 The new BMW 1 Series isn’t the first front-wheel-drive BMW but the switch is the biggest change in the model’s 15-year history, and the move has upset some enthusiasts. However, the company says that 85% of customers won’t be able to tell the difference, and it’s been set up to drive as well as the outgoing model. The M135i xDrive, sitting at the top of the range, gets a 2.0-litre four-cylinder petrol engine, four-wheel-drive and a limited-slip differential. Although it’s a litre and two cylinders down on the current 3.0-litre engine and has less power (302bhp), it completes the 0-62mph sprint in the same 4.8 seconds.

Below that is a 138bhp 118i petrol, which will be one of the most popular models, and three diesel engines offering between 114bhp and 187bhp. The switch to front-wheel drive means the BMW 1 Series may be available as a hybrid - if confirmed, it’ll likely use the three-cylinder petrol engine and the electric motor found in the MINI Countryman PHEV.

The super-fast Mercedes-AMG A45 is at the top of the A-Class tree, and has an astonishing 415bhp - although the A35 hot hatch has almost the same specifications as the M135i. Most buyers will be more interested in either the 1.3-litre or 2.0-litre petrol engines, which produce between 134bhp and 221bhp, or the three diesel engines, which offer exactly the same spread of power as the 1 Series’ diesel options. Mercedes has previously shown an electric concept based on the A-Class, so it’s not a big leap to expect a production version in the next few years.

The range of powertrains set to be offered in the Golf reflects the car’s broad appeal. In the standard line-up there are four petrol and two diesel choices, plus the option of mild-hybrid technology on three of the petrols, a GTE plug-in hybrid model and several performance versions. A six-speed manual gearbox is now standard, even on the lowest-powered engines, while a seven-speed DSG automatic gearbox is available (it’s standard on the hybrid models). There’ll be no electric e-Golf, as the Volkswagen ID.3 EV is about to go on sale in its place.

With the 2019 BMW 1 Series now in showrooms and the latest Volkswagen Golf available to order from February 2020, buyers will have a very difficult choice to make. The Mercedes A-Class is our best small luxury car of 2019 and, with its gorgeous interior, we can’t see the BMW or the VW beating it overall. However, the Mercedes’ interior needs some optional extras to look its best and, if you like driving, you’ll probably prefer the BMW. The Golf is much more upmarket than before, although some may say its badge doesn’t have quite the same desirability as a Mercedes or BMW. Put simply, it’s very unlikely that you’ll be disappointed, whichever of these cars you pick.