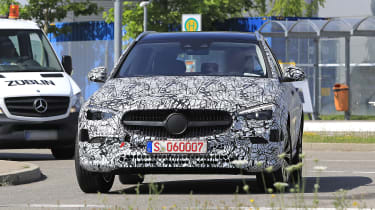 The next Mercedes C-Class Estate has been spotted testing in heavy camouflage. The car is set to go on sale in 2021 and will rival the BMW 3 Series Touring, Audi A4 Avant and Mazda6 Tourer. We expect the Mercedes C-Class Estate to be a little more expensive than its contemporaries, with prices starting from around £35,000 for an entry-level SE model.

While much of the styling is covered, we can see that the upcoming C-Class will feature reshaped headlights with new LED elements. Most trim levels are expected to come with LED headlights, while upgraded versions with a much longer beam will be available for extra cost. The front end will bear some resemblance to the facelifted Mercedes E-Class, albeit with a rounder grille and a less sculptured bonnet. At the back, the tail-lights will be similar to the current C-Class.

Read about the 2021 Mercedes C-Class saloon

The C-Class never got the same twin-screen MBUX infotainment setup as the Mercedes A-Class and Mercedes S-Class, and it’s likely that Mercedes will fit a large portrait touchscreen in the C-Class instead. The forthcoming S-Class has a much more minimalistic interior that takes inspiration from the Tesla Model S, so we’d expect the C-Class to come with a similar system - although it may not have all the same features. A new steering wheel is expected, too. 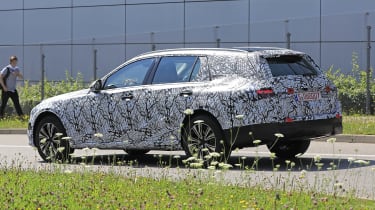 Diesel engines will still play a part in the C-Class estate line-up, and it’s thought the current 1.6-litre and 2.0-litre engines will feature. They’ll probably have 48-volt mild-hybrid technology to reduce fuel consumption and emissions, and both should hit 55mpg or thereabouts. The cheapest diesel will hit 0-62mph in around 8.5 seconds, while the more powerful C 220 d will hit the same marker in about seven seconds. Currently, the C 200 and C 300 petrol engines crack 0-62mph in eight and six seconds respectively, while achieving just under 40mpg.

Plug-in hybrid models will take on even more importance, especially for business drivers who will be attracted by low Benefit-in-Kind (BiK) rates. Mercedes is one of the only manufacturers to offer a diesel-electric hybrid (badged C 300 de), but a petrol-electric C 300 e will also be available. Up to 40 miles of electric driving is likely, and we hope that Mercedes manages to fit the batteries without compromising the boot space.

There’ll be at least two AMG performance versions at the top of the range. It’s not known whether a new V6-powered C43 will feature, but a mild-hybrid C53 and the range-topping C63 AMG model should both be available. The latter will have over 500bhp and a 0-62mph time of under four seconds.

Check out our guides to the best executive cars and the best cheap-to-run cars.