Sportback is the name given to the five-door variant of Audi's compact hatchback, which competes against the BMW 1 Series and Mercedes A-Class, as well as more mainstream models like the Volkswagen Golf and Ford Focus. It maintains an upmarket image despite being closely related to the less expensive (last-generation) Golf. It's also the only version of the Audi A3 hatchback you can buy any more, with the three-door having ceased production. The A3 also comes in a four-door saloon and two-door convertible body styles, which we’ve reviewed separately.

There are three TFSI petrol versions available, plus the high-performance Audi S3 and Audi RS3 models, which also get their own reviews. The 1.5-litre, badged 35 TFSI, is our favourite, thanks to its 44.8mpg fuel economy and 142g/km CO2 emissions - although it may not be the cheapest option for company-car drivers. This fuel-efficiency doesn't sap the A3's performance, either: 0-62mph takes just 8.2 seconds.

If you expect to cover more than about 12,000 miles a year, you might be better served by one of the diesels. The 148bhp 2.0-litre 35 TDI is fairly fleet-footed, with 0-62mph possible in 8.6 seconds, yet it promises up to 56.5mpg. Its CO2 emissions are respectable, too, at 131g/km, so its company-car tax won’t be too much costlier than the petrols.

Both figures are soundly beaten by the hybrid Audi A3 e-tron version – at least on paper, anyway. We’ve reviewed it separately and business users will love the low BiK bracket that its 46g/km official emissions enable, but real-world use away from city traffic is likely to return a fuel-efficiency figure some way short of its claimed 141mpg. 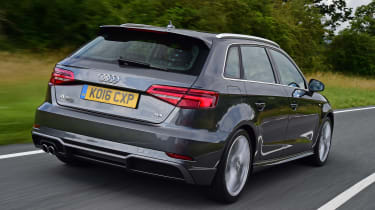 Whichever version of the A3 you choose, you'll find little wrong with its driving experience. It's a sure-footed, stable car, even without the availability of quattro four-wheel-drive.

Another big A3 plus-point is the interior, which is beautifully made out of first-class materials, and helps to justify the Audi's steep pricing. There are four trim levels to choose from and even basic SE Technik models want for little – 16-inch alloys, xenon headlights, air-conditioning, automatic headlights and wipers are all standard, as are cruise control and a DAB digital radio, sat nav and rear parking sensors. S line and Black Edition models offer much of the S3's sporty look, without the associated running costs.

Although it appears to be very well made, the Audi A3 range finished in a rather disappointing 69th out of the 100 cars ranked in our 2019 Driver Power owner satisfaction survey of cars currently on sale in the UK. It does have the top five-star crash-test rating from Euro NCAP, though.