The Mercedes A-Class is the first rung on the ladder of Mercedes ownership, going toe-to-toe with the Audi A3, BMW 1 Series, Volkswagen Golf and Lexus CT. Thanks to this positioning, it appeals to younger customers than most of Mercedes’ range and its sporty character reflects this. Mercedes has also radically changed the A-Class formula, shunning the upright and frumpy looks of its predecessor for the low-slung, wide appearance of a hot hatch. 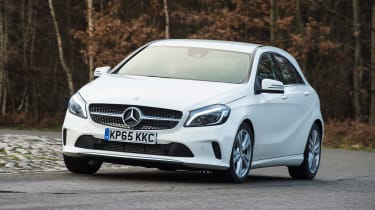 Benefitting from Mercedes’ large engine range, there should be a diesel or petrol to suit just about anyone. The diesel range starts with the A180d, a 1.5-litre with 108bhp that’s capable of up to 80.7mpg in the entry-level SE trim. The A200d and A220d are fitted with the same 2.1-litre diesel, tuned differently to produce 134 or 175bhp.

For those covering fewer miles or who want a smoother, sportier feel, there are four petrols to choose from. The 1.6-litre A160 is the most thrifty, averaging up to 52.3mpg, while the A180 and A200 use the same engine, tuned to produce 120 and 154bhp respectively, and managing 51. and 49.6mpg with a manual gearbox. In all three models, the automatic gearbox actually improves economy by around 2mpg.

Delivering more serious performance, the A250 is available with optional 4MATIC four-wheel drive and has 215bhp, while the Mercedes-AMG A45 hot hatchback can almost be thought of as a separate model (we’ve reviewed it separately). With 376bhp and a 0-62mph time of 4.2 seconds, it’s faster than many fully fledged sports cars.

Even standard versions of the A-Class are more communicative to drive than the comfortable-but-numb Audi A3, but the BMW 1 Series still rules the class for enthusiastic drivers. With rear-wheel drive or four-wheel drive and excellent balance, the BMW is as close as you’ll get to driving a shrunken-down luxury car. 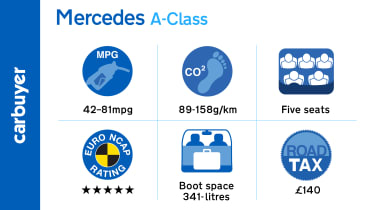 As you’d expect in a Mercedes, build quality inside and out is excellent. We don’t think the A-Class’ interior is as well designed as its rivals’, but it’s still a nice place to spend time. High-quality materials are used throughout, however the placement of the infotainment screen is rather jarring, especially when compared to the Audi A3’s, which folds neatly into the dashboard when not in use. The upcoming replacement for the A-Class will rely even more heavily on digital displays, with no analogue gauges at all.

There’s plenty of space in the front, but the rear seats will feel cramped to larger adults, as headroom is limited. The boot is of a good size, offering 341 litres with the rear seats up, but there’s a large lip to negotiate and the load space isn't the best shape.

Every version of the A-Class comes with seats that look like leather, but are actually a synthetic material, along with alloy wheels, air-conditioning, Bluetooth, cruise control, reversing camera and an infotainment screen controlled by a wheel on the centre console.

There are a number of trim levels, starting with SE, the Sport, Sport Edition and AMG Line, which have larger alloy wheels, racier exterior and interior styling and even bigger brakes and firmer suspension in the case of the latter, which sharpens handling at the cost of a rather uneven ride.

With a full five-star score from Euro NCAP crash-testing, safety hopefully shouldn’t be an issue and the A-Class even has standard features like autonomous emergency braking and a bonnet that can pop up to help cushion a pedestrian impact. Blind-spot monitoring and lane-keeping assistance are available as part of a ‘Lane Tracking’ option package.

The Mercedes A-Class finished 69th out of the 75 cars ranked in our 2017 Driver Power owner satisfaction survey of cars currently on sale in the UK.