Fast driving can be fun, but what if you just want to chill behind the wheel? We show you ten cars designed to relax more than to entertain. 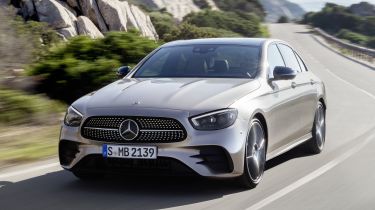 If you look at the range of motoring magazines on sale in your local newsagents, you’ll see dozens of titles and headlines that mention the words 'Fast', 'Performance' or 'Sports'. Today’s enthusiastic motorist is extremely well catered for when it comes to exercising their inner racing driver, but what if you want a car that soothes you, rather than quickening your pulse?

'Comfy Car' is not a magazine title you’ll see on newsagents’ racks any time soon, but there are actually many cars on the market that would deserve to feature in such a publication. Some canny manufacturers realise that not everybody wants to dart from one corner to the next, and so offer cars that concentrate on comfort rather than being sidetracked by sportiness.

Don’t be under the impression that a smooth ride has to mean corners can’t be taken confidently, though. Even if a car can’t thrill its driver with race-car cornering precision, very few of the cars you can buy today feel unstable or unwieldy. Most are still perfectly competent through bends and many still provide as much entertainment as a less demanding driver will want. You don’t have to take things to the limit to have a good time.

A genuinely comfortable ride isn’t the exclusive preserve of cost-no-object limousines, either. There are plenty of affordable small cars that can relax their occupants on a long journey, and a family car that can do that is far more likely to trigger sleep in younger occupants, putting an end to noisy bickering from the back seats.

Here’s our list of 10 most comfortable cars you can buy today. 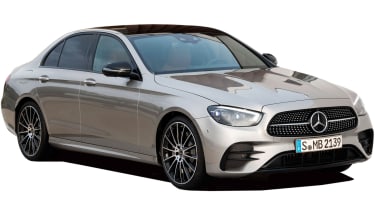 The Mercedes E-Class has always been praised for its fine ride quality, which goes hand-in-hand with its superlative build quality and top-notch interior to make it one of the leading executive saloons. It’s always played second fiddle to the BMW 5-Series as a ‘driver’s car’, but the latest version actually offers an engaging drive to match its first-class ride comfort.

There’s plenty of power and impressive fuel economy from a range of 2.0-litre diesel engines, which are quiet at high speeds, and the more powerful 3.0-litre diesel engine adds extra smoothness to make progress even calmer. The E-Class doesn’t come cheap, but it’s one of the best thought-out and most thoroughly engineered saloons on the market today. Just the job for the hard-working executive who just wants to get home and relax at the end of a hard day. 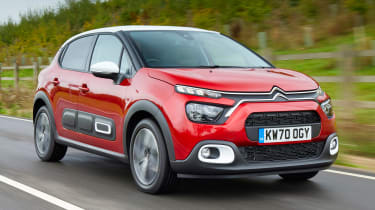 With its rivals putting sportiness ahead of comfort in the hope of appealing to young, enthusiastic drivers, the Citroen C3 stands out as the complete opposite: it’s deliberately tailored to offer a softer, more compliant ride and styling that doesn’t try to look aggressive or racey.

The C3 is fully equipped to deal with everyday life and has a refreshing focus on practicality, with good interior and boot space, plus big bumpers and, with top-spec Flair trim, plastic ‘Airbump’ side mouldings to protect from shopping trolley dings and parking mishaps. The C3 is still good to drive despite its softer set-up, while its range of petrol and diesel are efficient yet offer perfectly acceptable performance for a car of this type. In a class where lower and stiffer seems to be better for many, the C3 is a refreshing alternative. 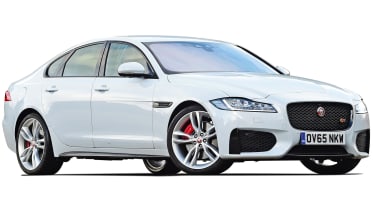 Like most cars in its class, the Jaguar XF is a very well rounded executive saloon. It offers a great range of petrol and diesel engines, a high-quality, luxurious interior and a driving experience that balances exceptional comfort with the sporty character that Jaguar is known for. The XF is remarkably refined at speed and offers great comfort for four (or five at a push); it has a hushed and spacious interior, which, when paired with the car’s supple suspension, makes for a very accomplished long-distance cruiser.

Performance is effortless, especially if you choose one of the more powerful diesel models – our favourite is the 178bhp engine, which returns around 66mpg, yet remains more than brisk and smooth enough in everyday driving. It’s not quite as cosseting at a Mercedes E-Class, nor as sharp as the BMW 5 Series, but the Jaguar XF is great combination of both. 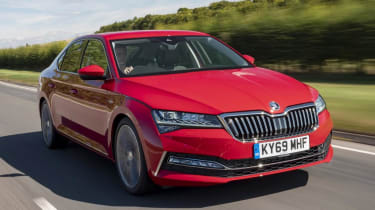 The multi-talented Skoda Superb is a firm Carbuyer favourite and with good reason – there’s no single area in which it disappoints. It makes this list by offering as much interior space as cars two classes above, as well as supportive seats and ride quality that’s more akin to a luxury car than a large family hatchback.

There’s a huge range of engines to choose from (we recommend the 148bhp 2.0-litre TDI with its 66mpg economy) and you can specify your Superb to be as spartan or luxurious as you like. Regardless of specification, though, the Superb always lives up to its name. 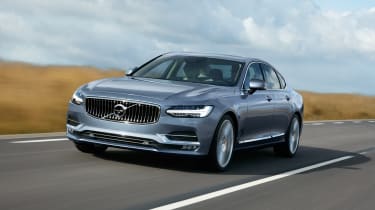 In a refreshing departure from the large executive norm, the Volvo S90 is a saloon without overtly sporty touches. It was designed from the outset to be a calming, relaxed cruiser that delivers its occupants to their destination refreshed; its spacious and minimalist interior is best specified with light leather and trim to make the most of this.

Its engines are similarly non-sporty (but by no means underpowered), with diesel, petrol and hybrid models offering hushed, smooth progress without any fuss. The S90 makes a great case for itself as a capable and comfortable executive car for those who value style and refinement above all. 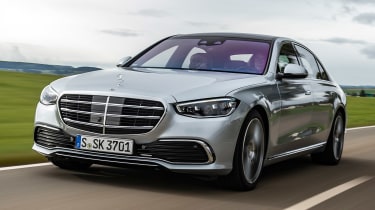 The Mercedes S Class is perhaps the world’s best luxury saloon. It leads the way in passenger comfort and is generally designed as a car to be driven in, rather than drive yourself – although the latter task is made easier by a full complement of the latest autonomous driving technology. Rear-seat passengers get unrivalled head and legroom and hugely comfortable leather seats, while the front passengers get similarly special treatment.

Higher-end models continue the opulent theme with Magic Body Control – a system that scans the road ahead and readies the suspension accordingly. We’d pick the ‘entry-level’ 2.9-litre diesel S350d, but there are 4.0-litre V8 and 6.0-litre V12 petrol options available if you’re in a hurry. 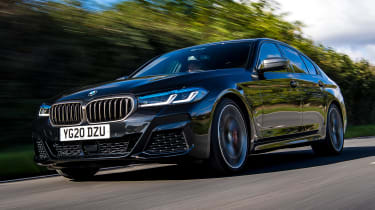 If you want an executive saloon that’s comfortable on the motorway and at slow speeds but that comes alive on a B-road, few strike a better balance than the BMW 5 Series. Choose smaller wheels and you’re likely to be especially impressed by the 5 Series’ supple ride, which manages to be comfortable yet well controlled. Its spacious interior is comfortable, well designed and packed with technology, while there’s loads of space in the rear for passengers to stretch out.

There’s a range of petrol and diesel engines to choose from, along with a plug-in hybrid model – most offer a good combination of smooth power and economy. Most models can be had with four-wheel drive, making the 5 Series a genuine alternative to many SUVs – there’s just as much space and comfort on offer, but the BMW is likely to be far better to drive. 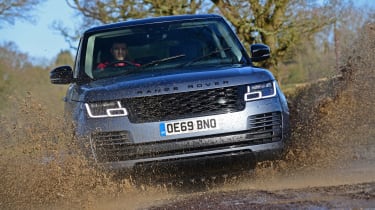 When it comes to offering a cosseting ride, the world-famous Range Rover has physics firmly in its favour. Its bulky frame and considerable height mean its suspension system doesn’t have to be crammed into a compact space, so its designers didn’t have to compromise on the ability to deal with rough terrain. Nor have they cut corners on ride quality, which has been a Range Rover virtue for many years.

Not only does the latest version have the smoothest ride of any SUV, but its shape minimises the sound of wind as it passes over the top of the windscreen, making the Range Rover one of the quietest ways you can travel. That is, of course, unless you choose the fearsome supercharged V8-powered SV Autobiography model, which will snarl loudly if you ask it to. But even that most radical of Range Rovers will settle down and soothe you with a smooth motorway ride, while offering a towering view over the roofs of more mundane traffic. 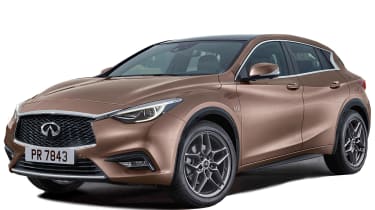 Infiniti is the luxury offshoot of Nissan, but its Q30 hatchback shares much of its underpinnings with the Mercedes A-Class, which is no bad thing. While the Mercedes is geared towards sportier driving, the Infiniti has comfort firmly in mind, offering a refreshingly relaxed alternative to other sporty rivals like the BMW 1 Series and Audi A3.

Outright performance and handling are not the Q30’s strong suit, but its plush, quiet interior and soft, pliant suspension make it one of the most comfortable cars in its class – there’s even the option of Active Noise Cancellation on some models, which transmits sound from the speakers to cancel out unpleasant frequencies. One downside is that the Q30 is a bit smaller inside than a VW Golf, so passenger space is not the best. 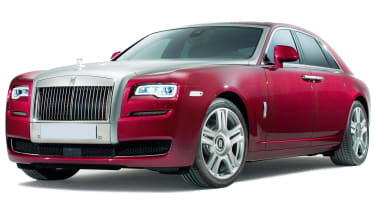 It was almost inevitable that the world’s most luxurious car should appear on this list, but we’ve put it in last place because you could very nearly buy every other car we’ve mentioned for the cost of one Ghost. It is, however, less expensive than the discontinued Rolls-Royce Phantom, yet shares much of that car’s opulence. While the Ghost is based on mechanical components used by the BMW 7 Series, it has an ambience all of its own, with an interior swathed in wool, soft leather and wood, without these rich materials looking tacked-on as they do in so many luxury saloons.

The extra weight of the Ghost means it isn’t as spritely in corners as its more plebian BMW counterpart, but it’s still capable of cross-country blasts at indecent pace, while the quiet oasis instead shields occupants from much of what’s going on under the bonnet. The Ghost is expensive, but no other car you can buy is quite as adept at preventing the hustle and bustle of modern roads from interrupting your rear-seat relaxation.