Take a look at the Audi A1 price list and it could be hard to rationalise the fact it costs a few thousand pounds more than a Volkswagen Polo or Ford Fiesta. After all, each model can offer economical, enjoyable motoring.

But both the Polo and Fiesta are outclassed when it comes to the interior quality and sheer desirability of Audi’s first-ever supermini, which feels better-built inside than many saloon cars. Using its know-how from building executive models, Audi has given the A1 an impeccable cabin that long-distance drivers are sure to appreciate, with only the MINI rivaling its upmarket feel.

The four rings on the A1’s grille have also imbued it with excellent resale values, so you should at least get more of your initial investment back when it comes time to sell. Audi’s supermini comes with three doors as standard, but the five-door Audi A1 Sportback is very popular, and we’ve reviewed it separately, along with the four-wheel-drive Audi S1 quattro, which is aimed squarely at driving enthusiasts. 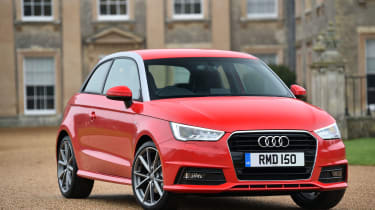 Weighing just over a tonne, the diminutive A1 is well suited to petrol engines and the range kicks off with a 1.0-litre petrol with 94bhp. This offers nippy performance (0-62mph takes 10.9 seconds) and impressive economy of up to 67.3mpg, with an 18% Benefit-in-Kind (BiK) sure to attract company-car drivers. The bigger 1.4-litre TFSI petrol gets 123bhp.

More reviews for A1 hatchback

While we’d recommend a petrol for most drivers, if you drive serious miles each year, the 1.6-litre diesel could work out cheaper thanks to its 76.3mpg fuel economy. Acceleration sits between the 1.0 and 1.4-litre petrol engines, taking 9.4 seconds to reach 62mph, while the BiK rating is 21%, unless you go for large wheels and an S tronic automatic gearbox.

On the road, the A1 feels very tied down and has plenty of grip, but it isn’t as fluid or satisfying to drive as the Ford Fiesta and top trim levels with larger wheels and stiffer suspension can make the ride jarring. 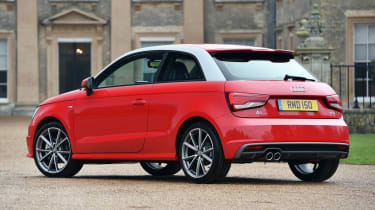 There are four trim levels, starting with SE and including Sport, S line and Black Edition, but that’s only the beginning, thanks to Audi’s myriad options and packs. Even if you did stick with SE, life wouldn’t be too bad, with DAB radio, air-conditioning and a 6.5-inch infotainment screen. Sport adds Bluetooth, stiffer suspension, selectable driving modes, leather trim highlights and more ways to connect music devices.

The S line trim also comes with sports suspension, but we’d recommend choosing the standard suspension at no extra cost, because we found it too firm, thumping into potholes. A bodykit and 17-inch alloy wheels enhance its looks and there are interior improvements too. The Black Edition adds even larger wheels, climate control and an uprated stereo.

The Audi A1 finished 74th out of the 75 cars ranked in our 2017 Driver Power owner satisfaction survey of cars currently on sale in the UK, and was criticised for reliability For this reason, an extended warranty could be a wise move if you plan on keeping the car for longer than three years. Safety isn’t a worry, at least, with a five-star rating in Euro NCAP crash tests despite the A1’s small size.