The Volkswagen Multivan is a replacement for the Volkswagen Caravelle, which built up a loyal following over the years. It was a more upmarket alternative to the Volkswagen Transporter Shuttle, while the Volkswagen California was the campervan version of the Caravelle. Name change aside, the Multivan offers some significant upgrades that should excite fans, not least the modern styling.

Many may have to wait for used examples to filter through, however, because in plug-in guise the Multivan is rather expensive. It starts at nearly £50,000, and in top guise costs more than £60,000. 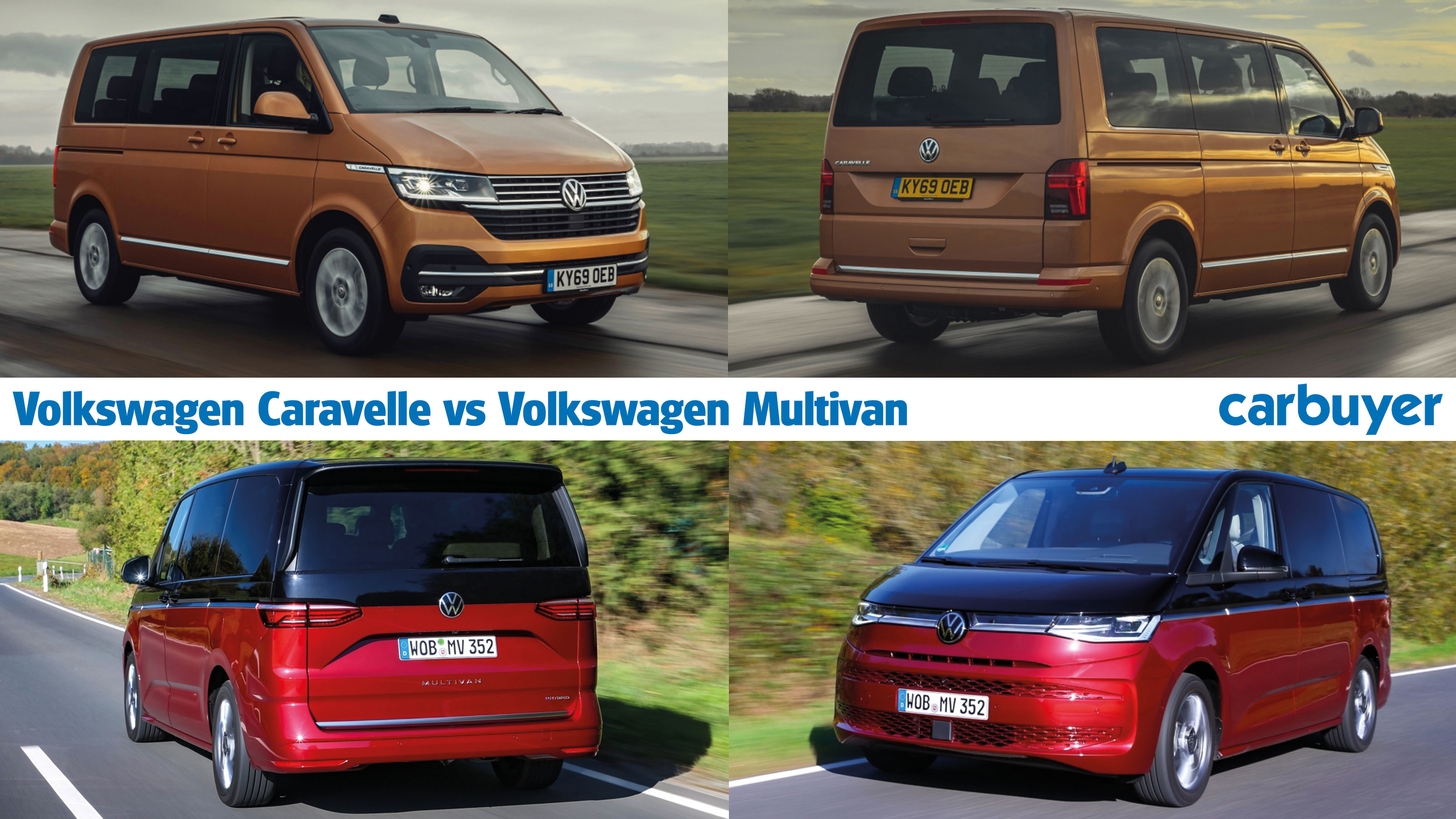 That’s a lot of money for a seven-seat MPV, especially in a class where sales have been decimated by the rise of SUVs, many of which are available with seven seats. The Multivan doesn't have many direct rivals, with only the Mercedes V-Class offering a similarly upmarket experience for a car of this size. More mainstream models include the Peugeot Traveller and Ford Galaxy, or you could pick up a fully loaded Kia Sorento or a Land Rover Discovery for similar money.

The Multivan still offers the advantage of van-like interior space without a commercial feel once you get inside. Rails allow the rear seats to slide and swivel by 180 degrees, while a storage cubby with a fold-out table can travel along the middle of the MPV to where it's wanted. There's also a 469-litre boot behind the third row of seats, which is something very few cars can offer. In the long-wheelbase version, cargo space with the rear seats removed is 4,005 litres, with the only downside being the inevitable calls from friends and family to help with house moves.

Volkswagen's latest infotainment setup and technology has been neatly integrated into the Multivan's upright dashboard, and it all looks contemporary and fresh. VW's media software has come in for some criticism in the Golf but the 10-inch touchscreen looks sharp and responds quickly to inputs.

Buyers can specify a Multivan in two regular trim levels, now that the special Launch Edition is no longer available. The Life and Style models are both well equipped as standard, with features including 16-inch alloy wheels, electric latching sliding doors, sat-nav, as well as lane-keep assist and an automatic emergency braking system that will stop you from hitting the car ahead if it stops suddenly. At the top of the range, the flagship Energetic Launch Edition got a more extensive list of standard equipment including a premium stereo system and a panoramic sunroof.

The Multivan’s smooth-looking face might lead some onlookers to think that it’s a fully electric model, but there’s no zero-emission powertrain option here. That’s taken care of by the Volkswagen ID. Buzz, VW’s modern interpretation of its classic T2 Microbus, which is likely to attract more attention than the Multivan, even if you specify the striking two-tone paint option.

In a surprise move for such a large vehicle, there was no diesel at launch, with Volkswagen instead offering a plug-in hybrid (PHEV) setup and a pair of petrol engines. A conventional 148bhp 2.0-litre diesel has now joined the range, and should suit the Multivan well. We've only tried the PHEV so far, which uses the same 1.4-litre TSI petrol engine, electric motor and 10kWh battery combination seen in the Golf and Passat GTE. With 215bhp, it sounds powerful, but the reality is a bit more pedestrian, with smooth but gentle acceleration. There’s also a rather harsh noise from the combustion engine when it’s made to work hard. Handling feels secure and light steering helps disguise the Multivan's size while manoeuvring in tight car parks.

We like the Multivan's sharp new design, interior space and clever seating, but it's very expensive in plug-in-hybrid guise. The petrol versions are cheaper, but given owners of these cars tend to rack up lots of miles we're not sure how acceptable its 35mpg fuel economy figure will be. Yet while diesel is becoming increasingly unfashionable, it suits a large vehicle like this very well, and will be the best choice for high-milers. No MPG figures have been released, but Volkswagen promises up to 620 miles on a tank of diesel.

A plug-in hybrid arrives ahead of a diesel version, with an EV range of around 30 miles

The big news here is the eHybrid powertrain, which is similar to the plug-in hybrid setup already found in the Volkswagen Golf GTE and Volkswagen Passat GTE. It pairs a 1.4-litre petrol engine with an electric motor, along with a 10kWh battery. When fully charged at home or using a public charge point, this gives it a zero-emissions range of around 30 miles.

With official fuel economy figures around the 150mpg mark and CO2 emissions of under 50g/km, the Multivan eHybrid slips into a low tax band for company-car drivers. Charging the battery pack from 0-100% takes just under 3.5 hours using a 3.6kW wallbox.

In a move that shows just how much Volkswagen's approach has changed in recent years, the only other engines available at launch were petrol. There's a 134bhp 1.5-litre on Life trim that achieves up to 35mpg and a 201bhp 2.0-litre for the Style version that returns a hot hatch-like 31mpg. These have now been joined by a 148bhp 2.0-litre TDI diesel that is paired with an automatic gearbox as standard and is likely to achieve at least 40mpg. While the plug-in hybrid’s figures are more impressive on paper, its fuel economy will drop sharply if you can’t charge it frequently.

The Multivan might be quite a bit more advanced than the old Caravelle but it still feels like a van once you get out on the road. The steering is very light and there's almost no feel for what's going on between the wheels and the road, but at least it doesn't lean over too much in bends.

In town, the light steering makes the Multivan feel easy to manoeuvre, helped by its tight turning circle. Anyone used to driving an SUV is likely to feel right at home behind the wheel, thanks to its high seating position and good visibility.

With 215bhp from the petrol engine and electric motor, the eHybrid doesn't feel quite as sporty as the headline power figure may suggest. This is made evident by its mediocre 11.6-second 0-62mph acceleration figure, and the Multivan never feels especially punchy. There's smooth acceleration, especially from the electric motor, but the petrol engine sounds slightly coarse when it kicks in to lend a hand.

The Multivan is fitted with VW’s latest infotainment setup, as seen in the current Golf. The 10-inch infotainment screen is sharp and responsive and when paired with a 10.25-inch 'Digital Cockpit' and head-up display it gives the Multivan an upmarket feel – this is an expensive MPV after all.

Most of the surfaces you'll touch, including the steering wheel and dashboard, have a quality feel but it's easy to find some hard plastics if you're sat in the back or go hunting in the lower reaches of the interior. A panoramic sunroof is offered for the first time, and an integrated eSIM means there's a permanent connection for online services and connecting to the Multivan remotely via a smartphone app.

Every version of the Multivan is well-equipped, with the entry-level Life trim getting 16-inch alloy wheels and electrically latching dual sliding doors. Standard safety features include lane-keep assist and an automatic emergency braking system that will stop you from hitting the car ahead if it stops suddenly. Opt for the Style trim, and 17-inch alloys are added along with upgraded Matrix LED headlights. This model also gets fully electric side doors, sat-nav, a powered tailgate and a park assist system that automatically controls the steering as you park. Hunt out a second-hand Energetic Launch Edition and you get 18-inch alloys, a Harmon Kardon premium stereo system, tinted rear windows and a panoramic sunroof.

There's a novel rail system for seats and sliding tables

The seven-seat Multivan is designed for its rear occupants as much as those in the front and so there's now a new party trick in the back. A rail system allows the second and third rows to slide forwards and backwards, or turn 180 degrees. In higher-spec versions all seven seats can be heated and the individual seats are also 25% lighter to make it easier for one person to remove them for maximum luggage space. It's also possible to specify the Multivan with six seats, but you’ll need the Volkswagen Transporter Shuttle if you want or need more than seven seats.

A central table can also slide up and down the interior, giving the front, middle or rear passengers cup holders and a height-adjustable fold-out table. It's handy but the creviced rail system does look like the perfect collection device for dirt, crumbs and other debris. There are USB charging ports and storage bins throughout the interior, ensuring the Multivan feels like a base camp on any family expeditions.

There's also more outright space than in the outgoing Caravelle, with 469 litres behind the third row of seats, stretching to 1,844 litres with the rear seats removed. The Ford Galaxy can manage only 300 litres with all seven seats in use. With both rear rows removed, there's 3,672 litres or a huge 4,005 litres in the long-wheel base version.

The Volkswagen Multivan gets the manufacturer's latest safety tech

It might be a large, boxy MPV but the Multivan is actually based on the same MQB underpinnings as the Golf and Passat, which are both well proven. It also uses tried and tested engines, including the plug-in hybrid powertrain. If there are any glitches, we'd predict they could come from the electronics but any bugs here could in theory be solved by over the air software updates.

The move to the MQB platform also brings VW's latest safety kit, including features like autonomous emergency braking, lane keeping and road sign recognition. It's also equipped with 'Car2X', which can communicate with other vehicles and local infrastructure to warn of delays and hazards in the area.

The best 7-seater cars carry around large families in comfort, and they needn't break the bank despite their load capacity. We have picked out the bes…
Top 10 best people carriers and MPVs 2022
Best cars

VW’s seven-seater MPV can now be ordered with a diesel engine starting from £44,410
Volkswagen Caravelle vs Volkswagen Multivan: old vs new
Compare cars

The new Multivan has replaced the Caravelle as Volkswagen’s plushest, largest MPV. Which should you buy?