The Nissan Qashqai needs little introduction. It almost single-handedly popularised the family Sports Utility Vehicle (SUV) and, despite a vast range of rivals, the Qashqai is still one of the best-selling cars in the UK. It’s almost become the default family car, while also appealing to people who want a little more space and a higher ride height than a traditional hatchback.

Nissan will hope that this latest Qashqai continues the success of its predecessors. The manufacturer has updated the formula with sharper styling and a much more modern infotainment system. It has also brought the Qashqai’s engine range up to date, with a new petrol engine featuring mild-hybrid electrical assistance and an ‘e-Power’ hybrid model. This is an interesting addition, promising a driving experience similar to an electric car and lower running costs than a petrol engine, but without the need to plug in to recharge.

Prices are still reasonable and extra space inside should make the Qashqai even better suited to families and outdoorsy types.

The styling is familiar but smarter. There are sharp C-shaped LED headlights at the front, along with deep air vent slashes and a chromed-up version of Nissan’s V-Motion grille. A new two-tone roof option adds personality, and there are deep creases down each side. It arguably still looks conservative next to the new Hyundai Tucson but may steal admiring glances from drivers of other rival SUVs, including the SEAT Ateca, Kia Sportage and BMW X1.

Family resemblance to the new electric Nissan Ariya SUV is clear but the Qashqai instead offers petrol and hybrid engines. This is the Nissan SUV for you if you can’t stretch to the Ariya or aren’t ready for a fully electric car. From launch, the Qashqai came with a 1.3-litre petrol engine with mild-hybrid assistance, which was used in the previous model (albeit without the electrification). A clever hybrid model has now joined the range, and we expect it’ll prove popular.

The Nissan Qashqai e-Power hybrid doesn’t have the market to itself, as the Ford Kuga, Honda CR-V and Toyota RAV4 are all available as hybrids. But due to the way the Qashqai is set up (the electric motor drives the wheels and the petrol engine acts as a generator) it feels different to its rivals. Nissan has kept its promise that the e-Power would feel like an electric car to drive.

It’s safe to say that the electrification is more noticeable than it is in the mild-hybrid, which feels like a normal petrol engine most of the time. Fuel economy in the new mild hybrid is around 10% better than the previous non-hybrid version, while performance is adequate rather than sparkling. A small weight reduction helps the Qashqai feel a bit more agile but it’s still not aimed at keen drivers. It’ll be absolutely fine for most buyers, especially as the engine is smooth and quiet.

The interior represents more of a step forward. Material quality has improved and so has the tech, with a new nine-inch touchscreen that’s faster and easier to use. Android Auto and wireless Apple CarPlay are available if you’d rather use your phone’s apps. A large digital instrument cluster is now fitted from N-Connecta trim and up, albeit with less crisp graphics than some of the systems we’ve seen. Unfortunately, with the rate of tech progress in this area of the market, the Nissan risks feeling dated in just a couple of years’ time.

N-Connecta is the third of five trim levels, and probably represents the best mix of value and equipment. The base-spec Visia edition is temptingly cheap but sparse on equipment (besides adaptive cruise control and rear parking sensors), missing out on a touchscreen and alloy wheels. Acenta Premium brings a rear-view camera, smartphone mirroring and two-zone air conditioning. Above N-Connecta, there are the top-spec Tekna and Tekna+ grades. Tekna+ brings big 20-inch alloy wheels, quilted leather seats (with massaging in the front) and a Bose sound system. 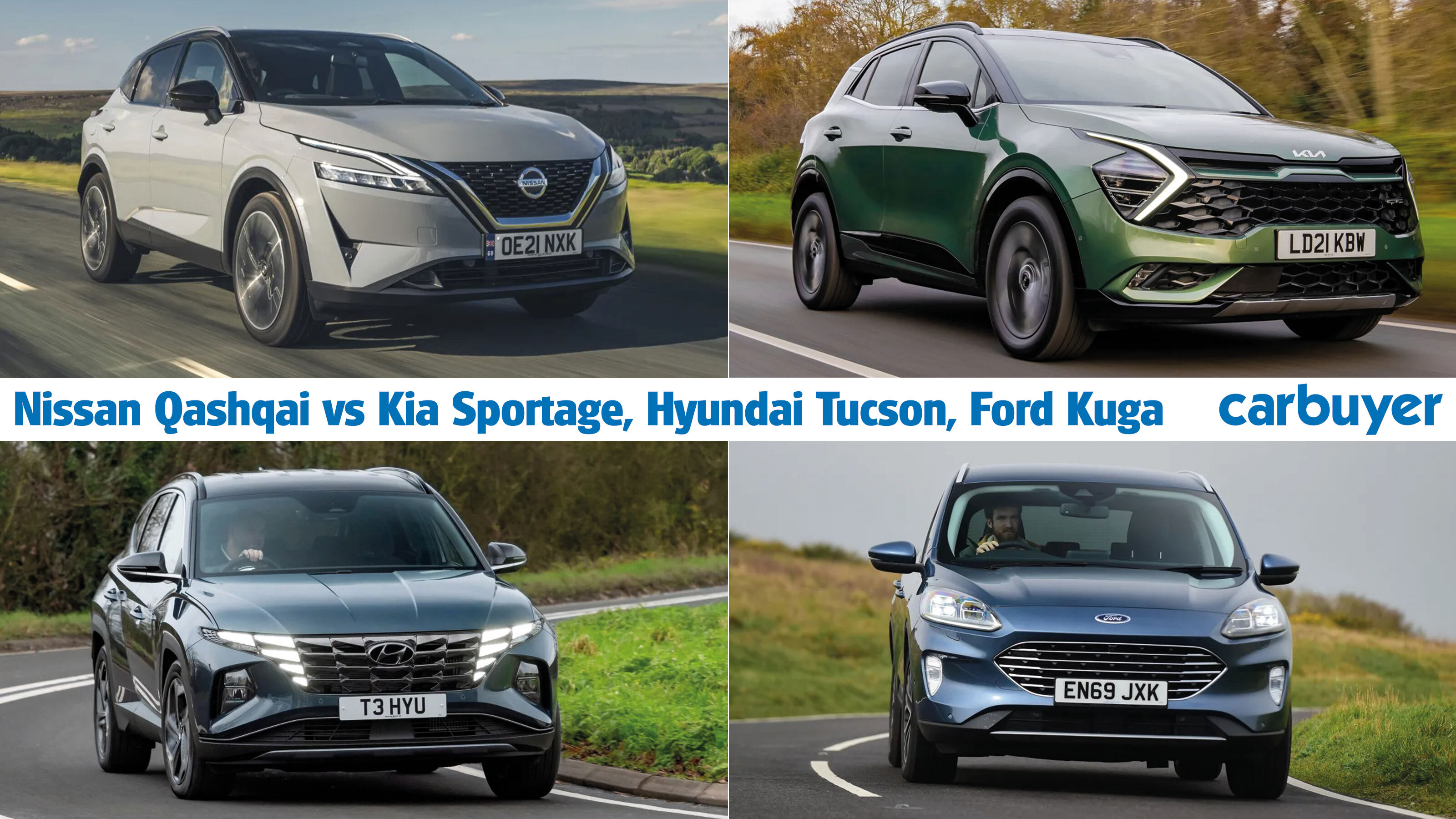 The improvement to tech up front is matched by more space in the back. Longer and wider than the model it replaces, the new Qashqai offers more rear legroom and shoulder room should be better too. There are more storage cubbies throughout the cabin and the boot is much larger than before. Its boot capacity ranges from 504 to 479 litres, which is average for the class but much smaller than the latest Hyundai Tucson and Kia Sportage.

If you’re happy with the current Qashqai, chances are you’ll really like the new one. The improved practicality shows that Nissan knows what its customers want, and the slightly lower running costs are welcome too. Add in more eye-catching styling, plus an up-to-date infotainment system, and the Qashqai is just about able to challenge the other big sellers in this class once again.

What about buying a used or nearly new Nissan Qashqai?

The latest Nissan Qashqai is still very new and while there are some second-hand models available, they aren’t too common yet. They should be a great buy if you’re considering a new one, though, as the car will be as reliable and as well-kept as a new car but with a lower price. The used car market is turbulent right now, but find a good deal and a used Nissan Qashqai is a fine option.

The first Nissan Qashqai came out in 2007 and many credit the car with starting the current trend for crossovers and SUVs. It may not have been the first crossover (a car with the practicality of an SUV but running costs more like a hatchback) but the Qashqai was in the right place at the right time to pick up lots of fans.

The second-generation model arrived in 2014, and while it wasn’t as revolutionary as the first version, it was a big success and was among the best cars in its class when it first came out. Rivals that came along since then bettered it in many ways, though, and by 2017 when it was facelifted the Qashqai was starting to feel a bit outdated.

The newest model feels back up-to-date, especially as it uses modern hybrid tech and the driving experience is as good as ever.

The second-generation Qashqai arrived in 2014, and was updated in 2017 and then again in late 2019. The later models with the 1.3-litre petrol engine are best, but also the most expensive. If you want a cheaper-to-run earlier model, the 1.5-litre diesel is a good option. Read more in our buying guide covering everything you need to know.

The first-generation Nissan Qashqai is still a worthy used buy, as prices are low and it’s as practical as it was when new. As most are now over ten years old, you may find that maintenance costs are an issue, but it should still be a good family car at an affordable asking price.

SUVs and 4x4s don't have to be gas guzzlers. We've picked out some of the most economical SUVs you can buy
The UK's top 10 best-selling cars 2022
Best cars

The mid-sized SUV market is one of the UK's fastest-growing, with buyers flocking to benefit from modern styling and family-friendly practicality. But…
Top 10 best used SUVs 2022
Best cars

Want to find an affordable SUV? Check out our list of the top 10 best used SUVs available.
Nissan Qashqai vs Kia Sportage vs Hyundai Tucson vs Ford Kuga: which should you buy?
Compare cars

"The Nissan Qashqai is a popular family SUV that’s practical, good to drive and affordable to buy and own"
The safest cars to buy in 2022
Best cars

These are the latest Euro NCAP ‘best in class’ cars, the safest cars crash tested in each category during 2021
Top 10 best nearly new cars 2022
Best cars

If you can’t justify buying a brand-new car but want all the latest features, a nearly new car will appeal. Here are the best
Nissan Qashqai: old vs new
Nissan Qashqai

The Nissan Qashqai N-Tec is a popular choice in the SUV's range, but is it the best buy?
Nissan N-Tec models arrive with styling and tech upgrades
Nissan Qashqai SUV

The Toyota C-HR is a bold crossover with hybrid power, and a two-tone colour scheme helps the range-topping Dynamic stand out even more
2019 Mitsubishi ASX SUV: price, specs and release date
Mitsubishi ASX

The Kia Sportage is a popular SUV, but is GT-Line the best trim level to pick?
SEAT Ateca Xcellence review
SEAT Ateca