While not every buyer will be interested in the oily bits that move the car down the road, the 2 Series Active Tourer is significant for being the first-ever front-wheel-drive BMW. All of the brand's other cars (including the BMW 2 Series coupe, but besides the 2019 1 Series) are rear-wheel drive, which is widely regarded as the reason they’re so much fun to drive.

However, BMW engineers have fine-tuned the 2 Series to ensure it lives up to the BMW name, by making it feel agile in corners and nimble around town. So confident is BMW with its abilities that the 2018 refresh brought few mechanical tweaks beyond the introduction of a seven-speed dual-clutch automatic gearbox, which is offered across the range. 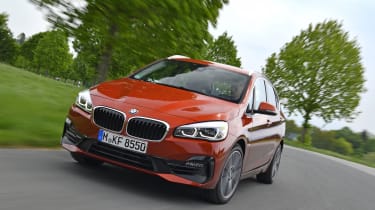 Few people buy a mini MPV and expect a sports-car-like driving experience, but the BMW 2 Series Active Tourer challenges the best in this department. While it’s not as engaging as a BMW 2 Series Coupe, it can easily challenge the Mercedes B-Class for entertainment on a twisty road.

A 1.5-litre turbocharged three-cylinder engine is available in the 218i, and there are two different versions of a 2.0-litre four-cylinder petrol in the 220i and 225i. Even the least powerful 138bhp 218i model is capable of accelerating from 0-62mph in 9.3 seconds, decent performance given its small size. The engine is smooth, quiet and makes a characterful noise, too.

The 2.0-litre petrol engine in the 220i takes just 7.4 seconds to get the car from 0-62mph, which is enough to shame some coupes. If that still isn’t enough, the four-wheel-drive 225xe hybrid can sprint from 0-62mph in just 6.7 seconds. That’s as quick as the Skoda Octavia vRS, and quick enough to humble many sports cars.

If you’re likely to drive this car with your whole family and all your belongings regularly on board, a diesel may be a better option. Its stronger pulling power means the engine doesn’t have to work as hard. Similarly, if you spend a lot of your time on the motorway, accruing a high mileage, the better economy of the diesels will make sense, too. 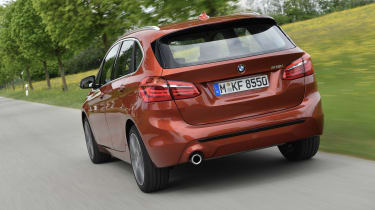 The 216d’s 0-62mph time of 11.1 seconds doesn’t sound very exciting, but in fact it’s a very easy engine to live with – there’s plenty of power available for easy and safe overtaking, and it comfortably copes with the Active Tourer even when it’s fully laden.

The BMW 218d uses the 2.0-litre diesel engine from the MINI Cooper D and will accelerate from 0-62mph in nine seconds – pretty quick for a car of this type. It sounds gruff, but it’ll be one of the better options when fully loaded. The option of xDrive four-wheel drive is a nice touch in the 220d, but it’s not really necessary for the UK’s relatively mild winters. The 220d manages the 0-62mph sprint in 7.5 and 7.6 seconds with xDrive or two-wheel-drive respectively, but the all-wheel-drive models aren’t quite as economical.

The 225xe has four-wheel drive and is powered by the 1.5-litre petrol engine working in conjunction with an electric motor. Managing 0-62mph in 6.7 seconds, it offers similar performance figures to the MINI Cooper S hot hatchback. While it's quiet around town, it can feel slow to react when you put your foot down – it takes time for the engine to kick in – plus it feels like a big car in the corners.