The BMW 2 Series Active Tourer is the brand's first-ever MPV, offering a practical interior and a decent-sized boot. While it's not as spacious as a Mercedes B-Class, it's infinitely more practical than the standard BMW 2 Series coupe – or even the BMW 1 Series hatchback. Rear space is decent, if not class-leading, but the Active Tourer has a rear bench seat rather than individually movable chairs. If the Active Tourer doesn’t offer enough space, the larger Grand Tourer version is also available.

There's a load of useful cubbyholes up front and a handy central armrest that doubles as a storage bin with room to charge your phone or MP3 player. You sit rather higher than in a conventional family hatchback and the expansive glazed areas allow a panoramic view out. There's plenty of adjustment in the driver's seat, too, so finding a comfortable position should be simple for anyone. 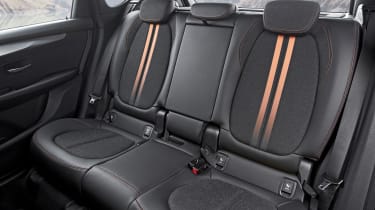 However, there's no avoiding the fact that in some areas, BMW has concentrated on style rather than substance – such as offering a conventional bench seat in the back rather than three individual chairs like you get in the Peugeot. While that limits your ability to fit three child seats, there's still plenty of room for three adults in the back. The boxy shape means there's plenty of headroom, too, and the small transmission tunnel leaves plenty of space for the middle-seat passenger to put their feet.

The 468-litre boot is by no means disappointing, while the power-folding rear seats drop at the flick of a switch to free up 1,510 litres of carrying capacity – just 30 litres shy of the total boot space offered by the Mercedes B-Class. The space can be expanded, if only slightly, by using the moveable boot floor, which can provide a discreet space for keeping smaller items. This is absent in the plug-in hybrid 2 Series, with total boot space down to 400 litres. 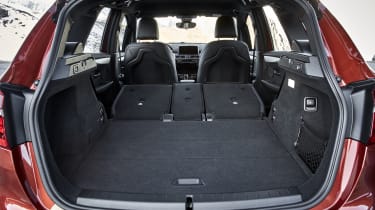 A decent luxury is the addition of a power-operated bootlid, so opening it is a breeze. The boot shape is nice and square and the boot lip is practically non-existent, so lifting heavy or awkwardly shaped items into it should be pretty easy.