How does Volkswagen’s electric ID.3 hatchback compare to the Tesla Model 3? 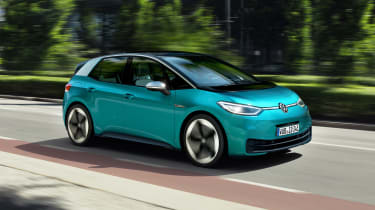 Electric cars are becoming increasingly popular because battery technology is improving and more affordable EVs are arriving. But while our list of the cheapest electric cars is a good starting point if you want to jump from petrol pump to plug, these two cars - the Volkswagen ID.3 and Tesla Model 3 - are set to be among the best-sellers.

If it’s familiarity you’re after, the ID.3 will appeal. You can think of it as a futuristic Volkswagen Golf; it’s a similar size and shape, and it’s thought that the cheapest ID.3 will cost the same as a mid-spec Golf.

For some, switching to an electric car is a chance to experience something completely different to run-of-the-mill petrol and diesel cars, and here the Model 3 suits the bill. The blanked-off grille highlights the lack of an engine, and it looks futuristic without being deliberately wacky like the BMW i3. Inside, it’s modern, clean and minimalist; there are no dials in front of you because everything’s controlled through the central touchscreen.

While these cars aren’t exact rivals, both offer low running costs (electric cars are free to tax and recharging costs a fraction of a tank of fuel) and environmentally friendly zero-emission driving. A quiet driving experience and brisk acceleration are rewards for EV buyers, too.

Volkswagen has confirmed that the first 30,000 ID.3s built will be high-spec ‘1ST’ models, and will cost around €40,000 (around £35,000). These will feature plenty of standard kit such as voice control, sat nav, large alloy wheels and Matrix LED headlights. Later on there’ll be cheaper versions, which we expect to start from around £26,000.

The Tesla is more expensive, with prices ranging from £43,500 to £56,500, making it a closer rival to the BMW 3 Series and Audi A4 than the ID.3. Every Model 3 comes with powered, heated front seats, sat nav and a tinted glass roof, while more expensive versions come with a ‘Premium’ interior upgrade. 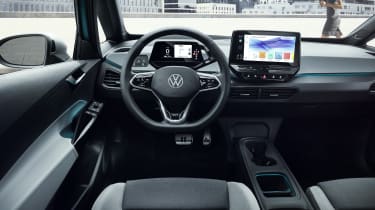 Step out of the latest VW Golf and into an ID.3 and you’ll notice a few similarities - a lot of the switchgear and controls have been carried over, either to save costs or to make the ID.3 feel like any other VW. With most functions controlled by the angled central touchscreen (and nearly everything else accessible by the steering wheel buttons), the ID.3 has a rather more minimalist look than the hi-tech Golf.

But if you’re looking for minimalism and distinctiveness, there’s no car interior like that of the Tesla Model 3. The trim pieces and air vents stretch from door-to-door, running behind the huge tablet-like touchscreen that you’ll use for the vast majority of functions. Even the lights, wipers and door mirrors are operated through the screen. Because it also shows all the driver’s necessary information, there’s no screen behind the steering wheel.

While the ID.3 is a similar size to the Golf, having all the batteries under the floor and no engine to worry about means it’ll be much more spacious. It’ll have a similar amount of interior space to the bigger Volkswagen Passat, and the boot should at least match the Golf’s 380 litres. The Model 3 is very spacious, too, and its flat floor means there’s more space for your feet and storage cubbies. It’s a saloon, so the boot opening doesn’t include the rear windscreen. Between the two boots (there’s a small one under the bonnet) you’ve got 425 litres of luggage space.

It’s safe to assume that the ID.3 will feature plenty of the same state-of-the-art technology as the Mk8 Golf, and Volkswagen will want to roll out its Car2X software on more models. This communicates with other cars about local traffic jams, roadworks and hazards. Alongside that is Amazon Alexa voice control, Apple and Android connectivity, while you’ll also be able to have an augmented reality head-up display and, eventually, autonomous driving. 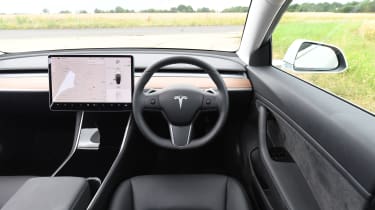 As you might expect from Tesla, the Model 3 is full of tech too. It may be smaller and cheaper than the Tesla Model S and Tesla Model X, but it still comes with the option of Autopilot ‘full self-driving’ (where the law currently allows). Your smartphone can be the key to lock and unlock the car, and the aforementioned touchscreen should be a tech lover’s best friend.

Euro NCAP hasn’t tested the Volkswagen ID.3 yet, but we’d expect a full five-star score. It’ll have a range of safety technologies like lane-keeping assist, autonomous emergency braking and pedestrian detection. The Tesla has been scrutinised, and its five-star rating included the highest-ever score for driver assistance tech, at 94%. Adult safety was rated at 96%, too. 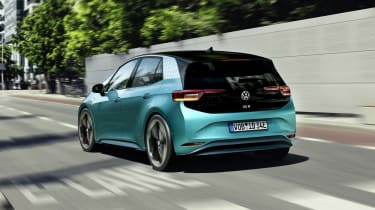 Volkswagen will offer three different battery sizes, allowing the ID.3 to manage between 205 and 342 miles on a charge. Entry-level models will have one rear-mounted electric motor, while more powerful ones will have an extra motor on the front axle, giving four-wheel drive and better performance. VW hasn’t confirmed any performance details and we’re yet to drive the ID.3, but the instant torque from the electric motor should make it feel quicker than a similarly powerful Golf. The ID.3 accepts charging at up to 125kW, so you’ll be able to top up the battery to 80% in the time it takes to have a coffee in a motorway service station or do the weekly shop.

Even the cheapest Standard Plus Tesla Model 3 offers 254 miles of range, and Long Range versions increase the possible driving distance to 348 miles. Tesla’s Supercharger network (which came top in our Driver Power chargepoint survey) is no longer free to use, but the Model 3 also has a CCS charging point and is therefore the first Tesla to be compatible with other charging stations. Superchargers take half an hour to recharge the battery to 80%, while a 7kW wallbox fully recharges the battery in 12 hours. 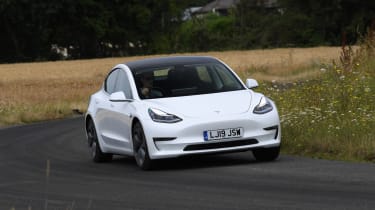 The performance might impress you more. Even the cheapest Model 3 gets from 0-60mph in just 5.3 seconds, and the Performance model reduces this to a ridiculously fast 3.2 seconds - faster than any Porsche 911, which costs nearly twice as much. Like most EVs, the Model 3 features brake regeneration so the car will slow down as soon as you come off the accelerator.

The Tesla Model 3 is an impressive package, thanks to breathtaking performance, a futuristic interior and similar range to a petrol car. All its plus points are enough to outweigh any build quality concerns you might have, and it’s worth its price. We’ll have to wait to give our full verdict on the Volkswagen ID.3, but the initial signs look promising. Its resemblance to a Golf should give it instant appeal, and it’ll still be quick, spacious and hi-tech. Because of this, and the projected price, the ID.3 may well be immensely popular - we’d expect to see it on the UK’s best-selling car list soon.

See where the Tesla Model 3 features on our list of the best executive cars, or check out our guide to the best used electric cars.