The Skoda Fabia is an extremely practical supermini, offering more boot space than a Ford Fiesta

The previous Skoda Fabia was a very practical car and Skoda has built on this to give the current model best-in-class boot space, plus enough room in the back for two six-foot adults.

Despite being smaller overall than the car it replaced, the Skoda Fabia is actually larger inside, with all occupants enjoying increased headroom. Elbow and shoulder room are good, too, with enough space in the rear for two full-sized adults – even sitting behind a six-foot driver.

As before, the Fabia is only available with five doors, but that’s no bad thing. The rear doors open wide, allowing easy access for both adults and children. 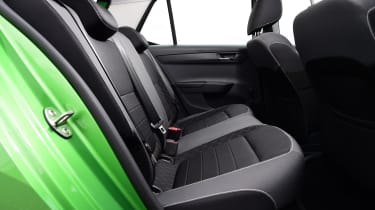 Up front, the high roofline means there’s plenty of space for even the tallest adults. There’s reach and rake adjustment for the steering wheel, as well as height adjustment for both front seats, so it should be easy to get comfortable.

There are plenty of storage spaces, too, including deep door bins that will take water bottles, a decent-sized glovebox and useful cubbies both in front of and behind the gearstick. What’s more, Skoda says the Fabia has up to nine of what it calls 'Simply Clever' features, depending on specification. These include things like an ice scraper stored in the fuel filler cap, a phone cradle in the centre console and a handy storage compartment in the driver’s door.

Boot space in the Skoda Fabia is an impressive 330 litres, which puts it ahead of most rivals, but has now been beaten by the SEAT Ibiza and Volkswagen Polo, that both offer just over 350 litres – a huge increase on before. 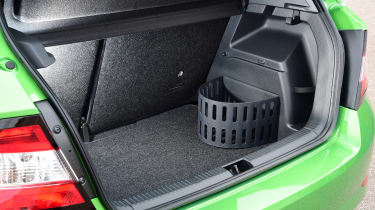 The boot is usefully square and has some handy storage cubbies at the side. Lowering the 60:40 split-folding rear seats frees up a generous 1,150 litres of space. That’s more than in a Ford Fiesta or Vauxhall Corsa.

The only negative when it comes to Skoda Fabia boot space is the fact that the seats don’t fold completely flat. They rest on the seat bases, creating a slight lip between the back seat and the boot. It’s not a deal-breaker, though, as the boot lip is lower than before, making it easy to slide large items in. A luggage net is optional.